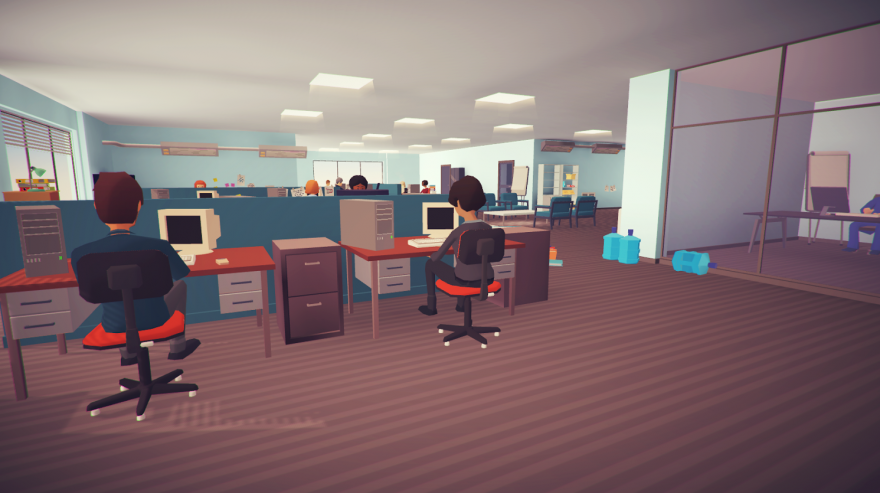 Rebecca Cordingley is a 28-year-old English expat who recently quit her job as art director for Schell Games to pursue her own projects. Her upcoming solo debut, IT Simulator, promises a simulation brimming with “frenzied physical humor” and minigames involving IT tasks like defragmenting hard drives, ridding browsers of pop-up infestations, and buying office upgrades in the role of manager.

“I’ve always loved playing videogames, but I didn’t always know that I wanted to make them,” says Cordingley. “I dabbled in a lot of interactive projects when I worked at a design agency, and that slowly turned into a focus on game development. Despite being on the visual side of the games industry, I’ve been learning how to program for quite a few years now.”

“I love the colorful whimsy and aesthetics of games”

Even though she worked on marketing materials, mobile ports, and localization for games like Enemy Mind (2014) and Orion Trail (2015), Cordingley’s formal education background is in graphic design. “I love the colorful whimsy and aesthetics of games like The Wind Waker (2002), Jet Set Radio (2000), and Viewtiful Joe (2003). But I’m influenced a lot by what sort of systems I like to code,” she says. “I’ve had a lot of fun writing the AI for the characters in IT Simulator.”

She also cites this year’s Stardew Valley as a key inspiration—a very recent example of how a single developer could make something interesting and polished, yet also personal, and go on to earn a wide audience. “[That] gave me a lot of courage to go off on my own.”

Cordingley says she’s never worked in the IT industry herself, but hopes that’ll allow for a more absurdly imaginative take on what is, in reality, probably a fairly mundane job. “In terms of games with serious themes that deal with aspects of society or life, IT Simulator isn’t really in the running,” she admits. “It’s probably as much a reflection on contemporary work culture as Goat Simulator (2014) is a reflection on goat culture.”

The game is still in the early stages, but Cordingley hopes to launch on both Kickstarter and Steam Greenlight simultaneously once there’s enough community interest in the project. She has already been approached by a couple publishers, but she’s keeping her options open in the meantime.