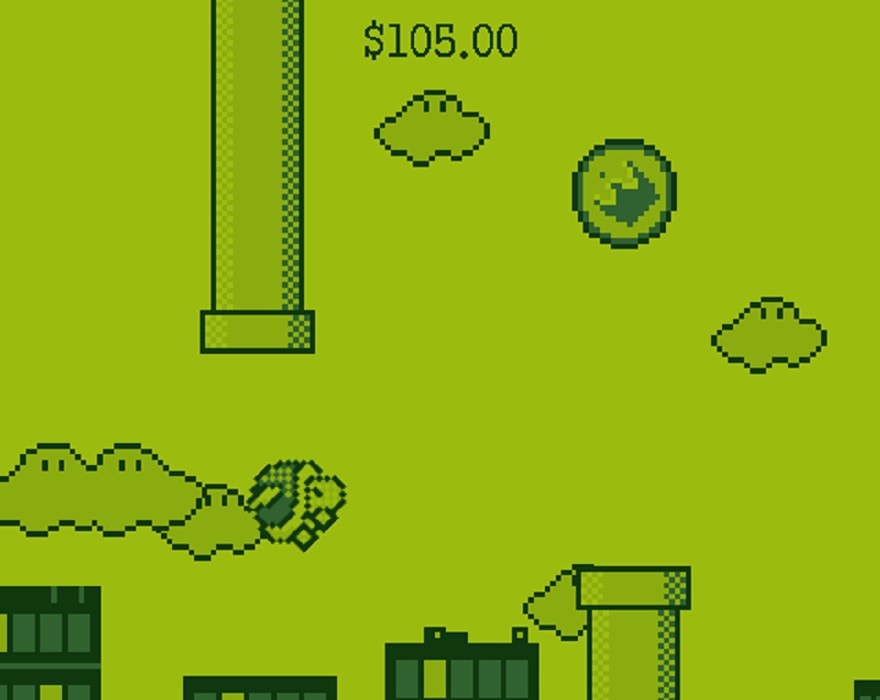 When enough people engage with the same cultural artefact—in this case, Flappy Bird—it starts to mean something. It takes on different forms that the author could never have predicted; it becomes a gateway to memories, a portal back through time.

Call of Duty: Modern Warfare 2 will, for me, always be the wasted days of lethargy at the height of my depression. I’d wile away hours at a time, uncaring for the competition and stylish bullet-cam kills that others sought after; I was only after the next unlock, focusing on a simple goal so that I could achieve something that day.

Flappy Bird has always been this hopeless

It would seem that Flappy Bird plays a similar role in the life of game designer and monetization design consultant Ethan Levy. This is a presumption not born of knowing the man, but of playing Levy’s explicit fusion of Flappy Bird with his own mid-life crisis, Flapping Bird.

Every time you jolt the winged tortoise (?) into one of Flapping Bird‘s green pipes you’re greeted with the depressing sight of a declining bank balance, struck by mortgages and overdue fees. A couple more collisions down the line and a sentence forces you to dwell on the death of love between you and your long-time partner.

That familiar gauntlet of pipes is no longer a challenge you’re raring to conquer. It quickly loses its appeal, becoming the mundane routine of your every day life as it slowly drips away into a gutter. “When did I last open my eyes excited for the day to unfold?” one line reads after yet another failed run.

Flappy Bird has always been this hopeless—it’s about a bird unable to break free from a claustrophobic gauntlet, unable to fully spread its wings. There is no end to this grueling situation unless you stop playing the game altogether, otherwise it’s a constant slog with occasional celebration upon beating your high score. Levy uses Flappy Bird‘s monotonous chore as a base for his own projection. The only additions he needed to make were the short snippets of bleak text, and the coins that you collect. These coins represent the money you bring home from work—it’s about $35 per coin. But the money is never enough, and the game’s design makes it so, so hard to collect more.

The leap into metaphor that Levy takes with Flapping Bird isn’t a large one. Is there anyone out there that associates Flappy Bird with joy at this point? It’s more of a frustrating pacifier; turning your smartphone into a device that spits out temporal achievements upon tapping its screen with enough regular beats. It’s the kind of invention you’d expect to see in sci-fi; a machine used to distract the human race by a mad scientist looking to take over the world.

Jesting aside, how Levy ended up in this depressed state of mind is a story that will, funnily enough, also resonate with the original creator of Flappy Bird, Dong Nguyen. Levy has previously outlined his own personal struggles with solo game development: failing to achieve the work he drew up for himself every day, entering what he calls the “Indie Shame Spiral,” a place fraught with regret and despair. He has also felt the need to defend himself after being called a “horrible person”—equated to being a cancer ruining the videogame industry—simply because part of his job involves being an advocate for free-to-play games. Dislike what he does or not, there’s obviously no reason for the swathes of vitriol and personal attacks that people launched against Levy.

Yet, this behavior is seen time and again: eager fans turning on the people whose creation they’ve grown so attached to. Nguyen was one of the more recent ones to be treated in a similar manner. Players of Flappy Bird attacked him online, even sent him murder threats, when he removed his game from App Stores. He did it after seeing how so many people had become addicted to it, and people told him how it was interfering with their lives. Nguyen received hatred and vile remarks for his decision. Flappy Bird, much like its punishing feedback loop, went from being an effervescent delight to a spiralling misery for Nguyen due to this.

Considering that, and having played Levy’s Flapping Bird, as well as being aware of my own experiences with relying on videogames to salve depression; I have to wonder … How many of Flappy Bird‘s millions of players treated it as a placebo for the ennui of a mid-life crisis or a bout of depression? What memories will Flappy Bird bring back for people in 10 years time—will it be a successful skip through the green pipes, or the sinking misery of smacking beak-first into the ground?

You can play Flapping Bird for free on itch.io.