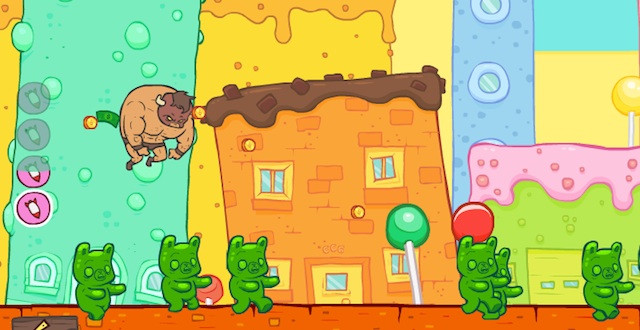 The game starts with a lot of the bells and whistles we’ve learned to attribute to small independent teams of art mavens who know their shit. Comic strips introduce Burrito Bison, the hero of Burrito Bison who appears to be a Mexican wrestler wearing a hollowed-out bison skull. He’s grocery shopping.

Long story short, Burrito Bison ends up trapped in a dusty arena, facing off against a toothy sparring partner that looks like a Reddit meme personified. Up until this point we haven’t even played the game yet but we know it floats in that zone between Nickelodeon and Adult Swim, half-comforting, half-unpredictable.

It’s a flinging game like the vastly overlooked Berzerk Ball, where you swing a huge bat and send a hapless geek/gimp flying for miles. But in Burrito Bison you fling yourself from the ropes, and if you time your fling just right you break your assailant’s teeth, and you fly out of the ring and go bouncing and skidding on the dirt. Also, all the fleeing people are Gummi bears. This way you can cannonball onto their faces and still be playing in a fun cartoon and not a psychotically violent revenge fantasy.

The bears help you to freedom by breaking your fall. But since you’re a big wrestler and you’re mostly grappling with gravity you eventually run out of steam and the bear cops whisk you back into the ring for the next go-round.

Three things to remember: First, each time you escape, you earn cash to buy upgrades for next time. The phrase “earn cash to buy upgrades” may make your eyes glaze over, like it just did mine, but when you’re playing Burrito Bison it’s all that holds you a tab apart from your email. Upgrades make you fly further and pillage better escape vehicles from helpless bears.

Third, the game saves your progress, presumably in a cookie, which you’ll be eating for approximately a week.