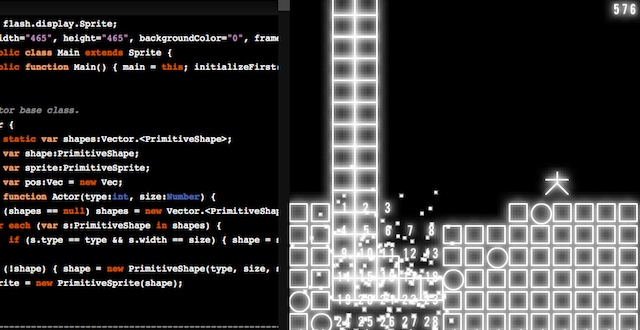 Foot Step is made up of—you can count them—one, two, three graphics: a circle, a square, and the kanji symbol for “large.” The game’s complexity arises from a simple set of rules. And it is a wonderful distraction. Every time I try to do something constructive online, like open up a Google spreadsheet, I end up playing Foot Step, distracting myself for half an hour—a long time, considering it takes less than a minute for the game to crush me like garbage in a trash compactor.

Created by shoot ’em up guru Kenta Cho as part of his Monamal Games project, a series of monochromatic and minimal Flash game sketches, Foot Step’s focal point is a boot that walks all over you. You’ll come back for more because, deep down, you like the taste of leather; because this boot is doing the hypnotic dance of the cult of Dionysian Mysteries—even though the game has no music to dance to, and the dancefloor is your face.

You control the kanji, a five-pointed symbol that points to the vastness below the surface and also resembles a little stick-man. It moves left and right and jumps to escape being squashed by the boot, which hovers above it, smashing down at quick, regular intervals. While the conditions never change, each game plays out a bit differently.

Part of the reason is that the code is slightly buggy. Sometimes the boot will come slamming down too soon; sometimes typically fatal situations let you escape unscathed. But the main reason that Foot Step always unfolds differently is that its rules are incredibly dynamic. You are dodging the boot, and by jumping out of the way at the last second, you are also directing it. When the boot misses, it hammers down through the shapes below, terraforming the ground. Though the game is completely silent, the strike resounds like a prayer bell being tolled, repeated through space-time like the Om of a yogi sitting with his legs crossed. The boot smashes randomness into an ordered space where you can leave your mark—if only for a moment, before being swatted like a fly. I know it sounds crazy: that the line between order and chaos can be defined by a footprint.