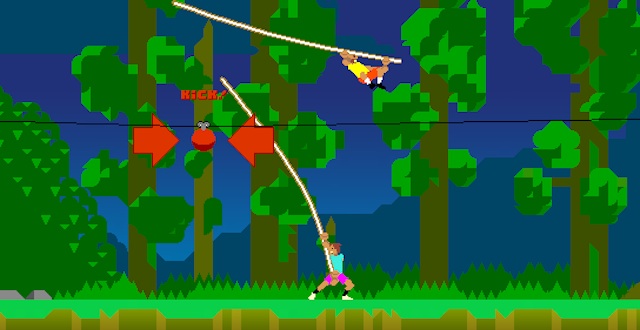 PoleRiders isn’t a fun game alone. No game by Bennett Foddy is really supposed to be fun. The Oxford professor delights in watching players struggle. In QWOP you run a race by controlling a track runner’s legs. GIRP has you holding three letter keys at the same time to climb a mountain. These games are about resisting the urge to throw your computer across the room, and coming back to them to laugh at the way you struggle. PoleRiders solo is mainly meant to teach you how to control—and that’s a very loose definition of what you’ll be doing—your little pole-vaulting dude. Left and right direct the would-be Olympian’s legs, and up and down control the arms. Practice jumping over phone booths and double-decker buses, and you might come away thinking it’s no big thing.

But PoleRiders, despite the late-night Cinemax title, is incredibly fun with other people. The goal is to try to kick and nudge a ball, suspended on a cable above, to the opposing player’s castle. This is very difficult. With skill and a lot of practice, the game can be overcome, but its fun comes in those first few games where nothing is intuitive. The pressure of having an opponent will lead to a mistake. And the shared pain makes that easier to digest.

If anything, the wacky controls are a source of comedy gold with friends around. Walk on and try to clumsily pole-vault off of your opponent’s pole. Use your pole as a wall to trick your opponent into bouncing off and hitting the ball in your favor. Stomp on their head to render them unconscious: particularly long games are littered with the corpses of pole-vaulters who couldn’t quite make the cut. You will curse loudly and then laugh at yourself. Misery loves company, and what better time to share misery than the holidays?