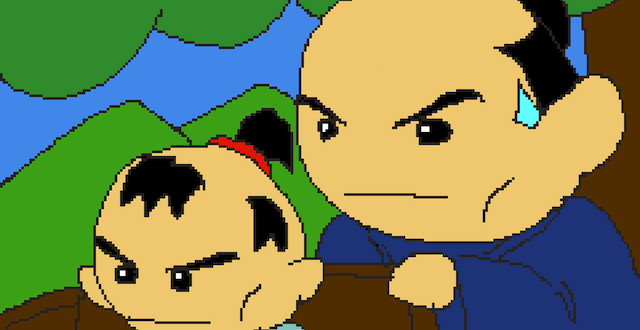 Flash Forward is a (very sporadic) column about the vanguard of games you can play RIGHT NOW.

In these parts Japan is known for Godzilla, anime, 60-member-deep all-girl pop groups, ramen, and green tea. Flashy, raw, edgy, and enthralling web games don’t show up anywhere on the list. It’s true most of the Japanese DIYers focus on making larger-scale doujin soft, such as the sprawling Touhou Project, the whip-cracking, ancient-artifact-jacking La-Mulana, and the peyote-hallucination-turned-adventure-game Yume Nikki. However, there are a few really genius short works hailing from Mario’s home court. They’re just hidden from us gaijin somewhere beyond the language barrier. Enjoy!

“Stay Onigiri!” The rallying cry is spelled out at the start of most stages. It doesn’t make a lick of sense when you consider that “Onigiri” is a type of hand-rolled rice ball. On top of that, nothing “Stays” anywhere. The game is on full auto-scroll, as two chubby ronin hop across ancient Edo in pursuit of delicious sticky rice, grabbing dinner the way Mario pockets loose change. But the most confusing part of all? You control both of them at the same time. This is a trick from the same page as rubbing your head and patting your stomach, or playing frisbee golf; but you get the hang of it. Soon you’ll be taking out avalanching boulders with throwing knives and counting up fat stacks of rice at the dojo while the top-knotted heroes strike happy poses. [Yamagame also made KS all-time fav PicoPicoFighters!—ed.]

Propagate and Ocwalls by ABA Games

In my dream cyberpunk nightclub or utopian milk bar, Kenta Cho’s games would be projected on the walls. The ex-bullet-hell programmer extraordinaire has been relentlessly pumping out prototypes of minimalist experimental Flash games for a few years now. Out of the 70-plus games, its hard to single out just one. So, here’s two. Propagate is about hiding your mouse cursor behind the sides of falling triangles to dodge the perimeter of expanding ellipses. In Ocwalls, you drag a triangle along a path while long rectangles slam together, ready to obliterate the triangle into flickering green particles. A hallmark of Cho’s work is how incredibly tight gameplay brings about striking visual design—or maybe it’s the other way around. You get the feeling there is a definite connection between intoxicating computer functions and cool-looking neon vectors.

I don’t know who made this one, but what’s important is, dried squid have been reconstituted! (Or they could be dancing pork chops, or mutinous chihuahuas from outer space—your choice.) Anyhow, somebody’s MS Paint drawing is under attack, and a giant doll head with yellow flashing eyes, a mouth flapping like a ventriloquist dummy, tentacles made of rubber balls, and a pair of hot-pink booties is the city’s last line of defense. Seriously, who needs Mothra when you’ve got this? Stomp on the bad guys, and kill the mega-dried-squid-evil-pork-chop-alien at the end of the level. You had me at dried squid.

Ever get the feeling that the game you invested hundreds of hours of your life on is little more than a Tolkien-themed calculator, using you for raw processing power to do arithmetic expressions? Parameters is so confident in the cold allure of data visualization that it forgoes ye olde barbaric Akkadian huntsmen and Xena Warrior Princess extras. Instead of lightning duels with wyverns, loot drops, and cacti-farming quests, Parameters has boxes that you click on and meters that go from 0 to 100 percent. This could be an actual role-playing game that someone gave up on creating halfway through, or the best commentary ever made on how lifeless the genre can be. Either way, it proves role-playing games are much better without the lore.

First, a disclaimer: Don’t play Taiso without a secure rubber case on your iPhone, or at least a damage protection plan from Verizon, because this is how glass gets broken. This could be the motion-controlled child of Stair Dismount and QWOP. You are presented with a gymnast spinning on the uneven bars. You tap the screen to launch him skyward. Then, you start twisting and rotating your phone as fast as possible, pulling off flips and spins like you are doing the energy ball dance at a rave, or throwing the maddest gang sign ever. Don’t forget to stick the landing, or else your airborne gymnast will tumble violently to the mat, shattering every bone.