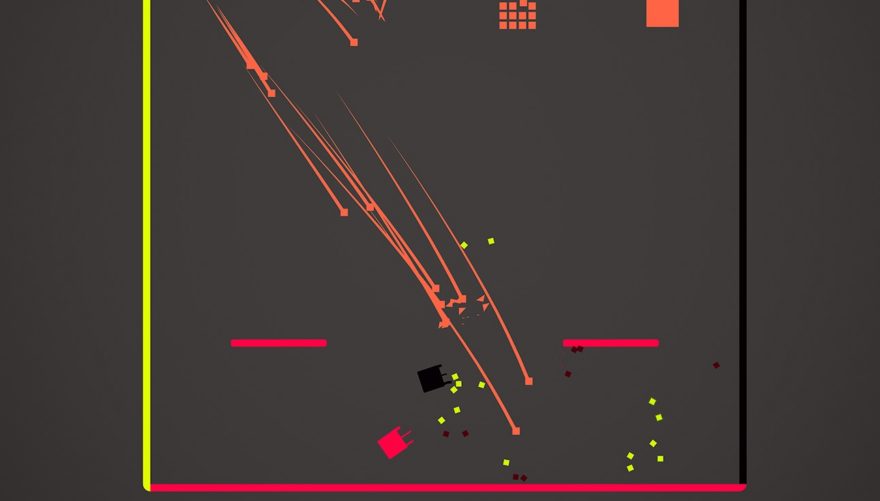 Flat Heroes is a game about squares in motion, literally. Flat Heroes is a multiplayer-focused game, one that has you controlling dynamic squares that move around a stage, dodging bullets until you can strategically rid the screen of enemies (preferably, all at once). The survival mode can be played with up to four players, either cooperatively or in a versus mode. It’s a simple premise that echoes other games like N++ (2015). But there’s a lot of cool tech running the scenes behind the flat curtain.

the feeling of controlling the little square felt so great

All the art in the game is done by code, rather than sprites or animated renders. This allows the squares to remain smooth and adaptable to any situation—necessary for a game that features the manic combination of platforming and bullet-dodging. As coders, this method was easier for developing studio Parallel Circles than hiring artists to help animate their game. For Flat Heroes the game is all about how it feels.

It evolved from wanting to make a 4-player local multiplayer game. Something like TowerFall (2013). However, the team of two quickly realized how responsive and intuitive their little squares moved around the screen. The movement of the game stood out immediately, and the original idea of an enemy wave mode quickly became incompatible with the game’s play style. However, since the feeling of controlling the little square felt so great, the idea quickly morphed into something of a bullet hell game—the game we can see today.

Flat Heroes recently got a trailer to go alongside its arrival on Steam Greenlight, which you can watch below. It doesn’t currently have a release date.