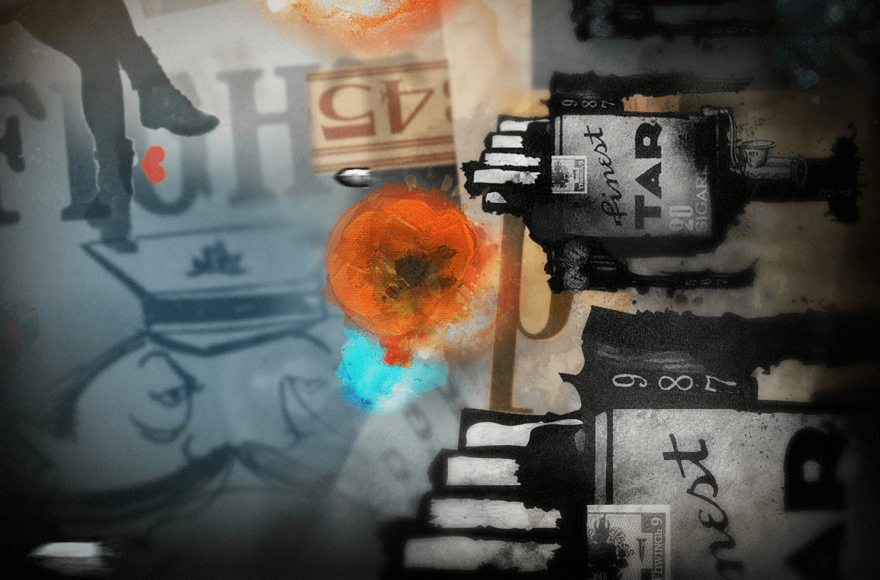 FLOMM! THE BATTLE For MODeRN 1923 is both an homage to classic videogame mechanics and a battle cry to embrace the avante-garde by destroying conformity. Playing as (essentially) the spirit of modern art, you blast the onslaught of traditional objects and concepts to a fiery oblivion. It’s destroying convention, while using some of videogames’ most conventional mechanics—a nonsensical contradiction between form and function that the modernists who inspired it would surely have relished in.

At first, creator Steve Mehallo envisioned FLOMM as a shooter simple enough to reach anyone with “fidgety fingers,” while also recreating the early arcade experiences he remembers vividly from the 80’s. “Watching things explode in animated color on a screen that one controlled was worth every walk to the pizza parlor or local deli,” he reminisces.

But, while teaching design history courses in colleges across California, Steve also started seeing odd correlations between the arcade games of his past and the early modern art movements of our collective history. One movement in particular matched that childhood fascination of blowing things up; a group who’s philosophies fit videogames like a glove. “The Futurists loved speed, war, violence, noise!” Steve says. “So much so that some of their best artists were killed in World War I.”

Steve went even further down the rabbit hole of modern art movements, including everything from DADAist nonsense, the basics of the Bauhaus, the culture and cabarets of Weimar. “Those movements were so radical that the Nazis wanted to shut them down,” he explains. “Hitler hated modern art. The work we see now as part of our past — the abstractions, the simplicity — were like punk rock in a world of quaint, naturalistic paintings.”

“The work we see now as part of our past were like punk rock in a world of quaint, naturalistic paintings.”

The conflict between modern artists and the “tyranny of tradition,” became not only the basis for the FLOMM! game, but also an entire fictional art movement he spread throughout his own personal network of artists, mostly through Tumblr and Twitter. Taking inspiration from the influential De Stijl movement, which Steve labels as “a design movement that was really just one guy with a magazine who ended up influencing art worldwide,” the FLOMM movement has grown over the past three years. Like all good early modern art movements, it inspired it’s very own manifesto, along with shows, salons, talks, performances. “It’s become another thing. Beyond the game,” Steve says, “Contemporary, modern, challenging! Art, fashion, music, design and culinary! I’d love FLOMM to grow into this. Anything’s possible, just have to see what happens.”

Steve also views the concept of this fictionalized 1923 modernist art movement as a way of exploring the malleability of history. “History is fluid, based on what was written down, who wrote it and how it’s interpreted,” he explains. “The history classes I teach are storytelling. It’s based on individuals who were at the right place at the right time, or wrong place, or stubborn, or out to make a buck. Many died not knowing how far their influence would take them. Others who saw people turn on them in their lifetime. The only constant is individuals who wanted to change things around them. And the traditionalists who would usually try to put a stop to any of that.”

In the process of creating FLOMM! THE BATTLE For MODeRN 1923, Steve has seen the war between conformity and experiment played out in the videogames industry iteself. “People rally around ‘we want change,’ but in reality, change is dangerous,” he says. “The video game industry has moved along – but is also very locked into ‘this is the way it is.’ I had several gamers tell me how I should be approaching this project, and every piece of advice was something like ‘this is how this other game does it’ and ‘if you don’t do it like this, it’s going to fail.’ Or my favorite, ‘FLOMM is too abstract, no one is going to get it.’ Which is pretty much what Modern Art was all about, so I knew I was on to something.”

While critics argued over whether FLOMM! was too abstract or not abstract enough, Steve remained content with it serving as either a videogame for people to enjoy simply, or an invitation to explore art and design history through its online movement. “There’s many things buried within the game itself. Just explore!” he insists. “The worst that will happen is you may end up learning a bit about history. While blowing things up.”

You can join the movement either by downloading the game on iOS for $2.99 or explore its many layers through the website.