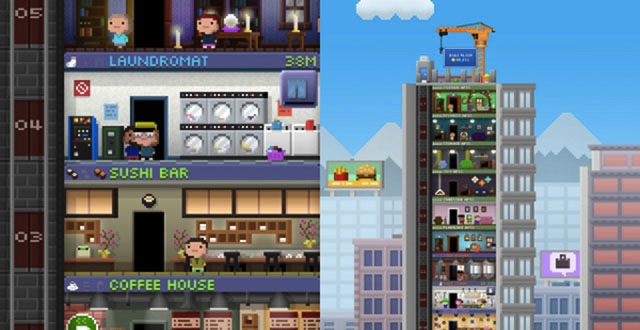 Playing Tiny Tower on your iPhone means having an entire skyscraper in your pocket. On the screen it’s mundane — the elevator goes up, deposits another Bitizen at the Mexican food restaurant, comes back down, repeat. But keeping a building in your jeans is actually a pretty incredible prospect in terms of architecture. The largest built structures in the world, those same Dubai towers that stretch to 163 floors, are condensed into a screen infinitely thin. We scale up and down the virtual edifice not on our feet or in a lift but with quick swipes of our fingers, brushing past residential floors to the photo studio that needs restocking, stopping just in time.

Tiny Tower is an ever-changing human habitat, with stores needing to be built, apartments inhabited, and Bitizens requiring attention to their every need, but it’s also an incredibly interesting spatial system. Like the influential SimCity or SimTower, it transposes complex, layered physical spaces into the shallow space of the screen. That requires some mental gymnastics, but we seem to perform them with ease, effortlessly conceiving of an entire building at our fingertips. Videogames’ ability to turn microcosms into immersing macrocosms is one of its charms—see Shigeru Miyamoto’s famous statement that he wanted the original Legend of Zelda to be like a “garden in a drawer.” But another medium shares this ability: architecture itself.

Think of the scale models and blueprints that are the hallmarks of an architecture studio. Aren’t those simply interactive environments, shrunk down so we can view them from a godlike vantage and experience a simulation of what this reality might be like? Tiny Tower’s core mission, to provide for a group of people and build a habitable, efficient space, is also the task of the architect.

Though Tiny Tower’s core tasks of building and restocking floors, accruing dollars, and making sure your thankless Bitizens are satisfied with their jobs can get boring quickly, I’d bet it’s a lot more fun than making sure real human beings are happy with their built environments. Bitizens, for one thing, don’t actually ensure your day-to-day livelihood, and you can leave them to their own devices when you shut the phone off.

If they could get past the tinny music and limited gameplay mechanics, several architects would find the iOS game’s infinite compression of space and endless replication both fascinating and familiar. The Metabolists, a group of Japanese architects who rose to avant-garde prominence in the 1950s, are known for their obsession with modular architecture, creating designs that could be repeated over and over as space or demand allowed. Buildings like the Nakagin Capsule Tower by Kisho Kurokawa, one of the few Metabolist projects actually executed, hint at infinity with their duplicating structures, in this case a series of boxy living compartments that extend off the building’s central axis. Kisho Kurakawa’s Helix City Project is an entire city (again, think Tiny Tower’s closed ecosystem) contained within a spiraling helix, the organic providing a model for reproducible urbanism.

The largest built structures in the world, those same Dubai towers that stretch to 163 floors, are condensed into a screen infinitely thin.

Rem Koolhaas, a Dutch architect whose tome Delirious New York has become one of the central texts of contemporary architecture, might be another Tiny Tower fan. In that book, he writes, “the city is an addictive machine from which there is no escape,” about as apt a metaphor for the videogame as I’ve ever heard. Koolhaas’ embrace of chaos, introducing the unexpected into expected forms, is beyond the reach of our listless Bitizens, but the architect’s bizarre CCTV Tower in Beijing is something like a glitched-out version of the game: a structure that was supposed to be vertical but ended up an infinite loop, folded into itself.

Whether it’s a garden in your drawer or a tower in your pocket, videogames crunch architectural space into something both cutely recognizable and conceptually revolutionary. It’s a strange echo chamber: the architect creates our physical environment, viewing us as little characters on a fictionalized map, while we pilot our own miniature cities, playing architects of unreal universes.