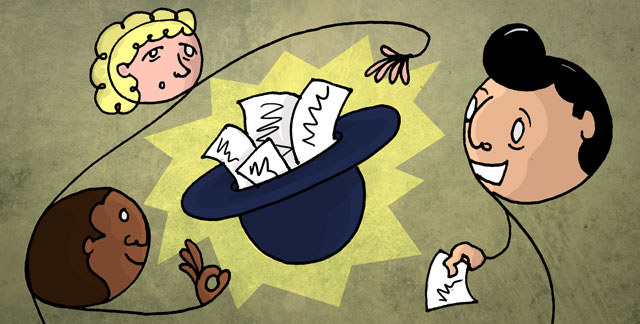 The Game With a Hat is The Best Game to Play Instead of Capture the Flag. I was introduced to this game as The Hat Game, but after a quick Googling turned up a metric ton of hippie-New-Games-style party tricks each claiming to be The One True Hat Game, I changed the name for edification and clarity.

I don’t like guessing games. I was supposed to play Capture the Flag at a birthday party on a farm in Athens, Ga. filled with people I didn’t know, but it started raining. Smoking on a porch (perhaps the ur-Best Game to Play With Strangers), we started talking about the popular crime television series The First 48 and how we should do a murder-mystery thing. They were waxing nostalgic over some seriously Baroque murder-party shit—the kind where you have to go to a place that looks like an old house and pay people to tell you to play a role and give you a flea-bitten jacket to wear for the evening—and I briefly considered telling them about Werewolf/Mafia, the game Douglas Wilson has called The Most Political Game of All Time.

But I don’t like Werewolf/Mafia. As far as guessing games go, it’s got to be the most under-designed in the known universe. I’ve played it with tens of variations on role assignments and turn rules. I’ve played it enough to know that nobody is actually “good” at Werewolf/Mafia, despite claims to the otherwise. What kinds of strategies can you form in a game with such a low signal-to-noise ratio? Maybe Doug is saying it’s so supremely political because “politics are bullshit,” and the game is just full of bullshit. In the end, I think everybody else realized that murder-party games aren’t any fun—you just think they’re fun until you play, like EVE Online or your favorite DVD from when you were fifteen (the answer is Fight Club).

Here are the rules to The Game With a Hat—or, at least, the home rules as conveyed to me by one Margaret Child on Saturday, March 26, 2011 on Orange Twin Farm, Athens, Ga. while it was raining.

SETUP: Everyone sits in a circle and writes five names of “famous people” on separate pieces of paper, folds the pieces of paper, and places them in a hat (our hat was a red top hat, and thus presumably had never been worn by an actual human being). You will also need a one-minute timer and a paper-and-pencil/pen to keep score. Select someone to “go first.” Play proceeds counter-clockwise around the circle.

“Famous people” may be interpreted to mean “cartoon characters” and “mythological people, gods, or beasts,” but, in my experience, these are too easy to guess (because they usually only have one name: “Zeus,” “Snoopy,” “Jesus”) and thus should only be used when “friendly play” is desirable (never).

Your first tactical decisions address “where to sit” and “what kind of names you should write down.” Unless you’re a total creepster, you probably came to this party with at least one person that you know. Sit next to the person you know best (preferably to their right—this minor detail will become important later). As for names, go ahead and pick three or four that you think nobody else in the room will know (but don’t be too much of an egregious dick about it). You might be shooting yourself in the foot if neither the person to your left or right knows any of the names, but you can always just blurt them out in case of emergency.

You slowly learn how to break through mental barriers, your own and those of your partners. You start the game by dipping your pinky toe in the water, and by the end you’re an Olympic swimmer.

If the person to your right correctly guesses the name before the timer is up, keep drawing pieces of paper for the remainder of the minute. Remove correct guesses from the hat. Proceed counter-clockwise. This means that after being a “guesser” in one round, you will be the “clue-giver” in the next. An important strategy is to pay a lot of attention to the names as they are guessed during the first round, taking care to remember the clues that were used to arrive at the correct guesses. Doing so will allow you and your partners to rapidly guess from the known pool of names during rounds two and three. The game can thus become easier in practice even as it technically becomes more difficult.

This is how scoring works, and it’s important to understand the implications here: Both you and your guesser get a point for every correct guess. You really don’t have much of any control over the performance of any player that isn’t sitting to either side of you. I mean, I guess you could laugh as obnoxiously as possible during their turns in order to distract them from the task at hand, but that would become obvious (and make your fake-laughing voice hoarse) fairly quickly. Where you do have control, though, is over your clue-giver and your guesser. You can play them against each other. If you’ve been jiving well with one, just pretend to be super-stumped for a few rounds and throw some points in the other direction.

ROUND TWO: Once the hat is empty, round two begins. Do not reset turn order—whoever finishes off the hat gets to go first in the next round. Put all the names back in the hat.

Now you are only allowed to use one word to describe the name from the hat. Choose carefully. It is acceptable to use exactly one of two other words after announcing your one-word clue: “fuck” or “shit,” once you realize that you’ve selected the wrong one-word clue and now must sit there like an asshole for a minute apologizing to your partner with your eyes. Remember that everyone knows the names in the hat now. Use words that resulted in correct guesses earlier. Don’t just say “musician,” because there are probably thirty musicians in the pile.

At this point in the game, you’ve probably developed some form of intimacy with the people to your left and right. Perhaps you’ve fallen in love. It’s easy to forget here that this is a serious competition. This is around the time that you might think, “Hey, Werewolf/Mafia isn’t so bad. I don’t like winning things.” But you’re wrong. Keep your head in the game. If drugs are being passed around the room, pretend that you’re “already buzzed, y’all” without coming off as a square. Ask to see the score card so as to know who your real enemies might be at this point, but don’t stare too long at the card or the people you now hate for being so much better at guessing than you are.

ROUND THREE: Once the hat is empty for the second time, round three begins. Do not reset turn order. Put all the names back in the hat.

In round three, you may only silently pantomime the name from that hat. Round three is where the game becomes increasingly difficult for people with any concern for political correctness. When I played, two hands making an arcing motion over the chest meant “woman” and a hand pointed downward from one’s crotch meant “man.” Obviously you should be more creative than this, but by this point in the session you’re probably all going to be inebriated.

Cynics (including me-before-I-played-it) may claim that The Game With a Hat only “seems” good because it’s nothing more than a rapid-fire “greatest hits” of already-decently-playable games: some word clues from Password, a little bit of play-acting from Charades, and a competition model that feels like a riff on Magic: The Gathering‘s “Star” variant. This would be missing the importance of the game’s iterative cycle. It’s about a mix of soul-crushing frustrations and ecstatic epiphanies. You slowly learn how to break through mental barriers, your own and those of your partners. You start the game by dipping your pinky toe in the water, and by the end you’re an Olympic swimmer.

The Game With A Hat works so well as a party game because the round-based structure narrows the expressive and semantic range of the entire group as the allowable range of clues becomes more restricted. I played with ten strangers who, by the end of the three-hour session, shared a common language orbiting the sixty-odd names that the group had selected. I knew about their musical and cinematic tastes, how loose they were willing to get with their language and their bodies, and their ability to read group dynamics and silent cues. I lost miserably, because I didn’t follow any of my own strategies or tactics. Don’t follow any of the above strategies or tactics.

Perhaps you’ve fallen in love. It’s easy to forget here that this is a serious competition.

FIN: Whoever has the most points when the hat empties for the third time wins. Goes well with tequila sunrises and pretty girls/boys. Don’t forget to tip your scorekeeper. Fuck Werewolf/Mafia. I’m out.