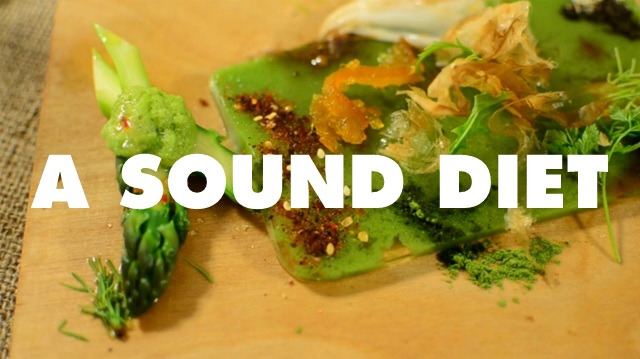 by Jon Irwin
@winwinirwin
Google+
I’m worried about my beard. If food gets stuck in the bristles, will the system detect it? Will my personal speaker emit a sloppy, haphazard white noise, the audio equivalent of my wife’s daily reminders to shave? If I go to the bathroom, will I miss a pre-ordained swell of music at just the right time? If I chew too slowly, will a motif lower in octave beyond what the maestro intended? How finely tuned is this thing?

I’m sitting at an interactive dinner, a ‘food opera,’ held at Bondir restaurant, in Cambridge, Mass. Our maestro is Ben Houge, media artist and instructor at the Berkelee College of Music. You might have heard his work before; for twelve years he worked as Audio Director on games for Sierra, Microsoft, and Ubisoft. On this cold, clear night outside of Boston, he will watch twenty-six diners eat a five-course meal designed by Chef Jason Bond comprising local produce and animals. Eating, as one can guess, happens most nights at Bondir. But most nights, each dish is not accompanied by a personal, dynamic soundtrack.

“Sensing Terroir: A Harvest Food Opera” was Houge’s second attempt at marrying his love of experimental sound installations with delicious, responsible food. In May 2012, Harvard Graduate School of Design played host to “Four Asparagus Compositions,” an exploration of taste and sound paired with Chef Bond’s take on the pointy vegetable. The event was a success, garnering attention on NPR, and the two vowed to work together again. Bond and Houge aim to host their third food opera on June 30th of this year, with a focus this time on poultry.


Houge calls his Operas an attempt to “forg[e] an experiential link between the senses of taste and sound.” I’m not sure, after having eaten and listened to my first course, whether the two senses have proven combative or complementary. My speaker emits static, far-off waves. Houge tells me he’s not trying to tell a story, but create a landscape or a place. “Enjoying a well-crafted meal [is] an inherently time-based experience, akin to ballet, music, or film,” Houge writes on his blog, explaining the origin of his Food Opera series. “The desire to compose music to accompany a meal, just like a dance or film score, followed naturally.”

What can videogames teach our older pursuits?

As technology’s steady advance knocks down their constraints, game designers will need to learn new techniques for immersion, new tricks for surprising a generation of players with refined, hard-to-satisfy tastes. The inverse is also true: What can videogames teach our older pursuits?

Houge told me of a 2006 journal entry, written during his time at Ubisoft Shanghai, that described using videogame composing techniques to score a meal. One night at a favorite restaurant, he and friends spent six hours eating carefully selected dish after dish: twenty-two courses in all. A fine meal was a work of art like any other, he decided. He saw a challenge—to evoke the unique sensation of taste, in all its organic and psychological layers, through music. Six years later, he’s finally found a receptive audience. And tonight they are hungry.

A throbbing hum cloaks the small dining area of Bondir. Two large wooden crates, topped by what look like helmets out of Full Metal Jacket, sit in the middle of the room. Four groups of eaters are in various phases of their meal; like during any other, they shift between chatting and forking small bites of food in their mouth. They pay no attention to the front window, in front of which sit two men, each dual-wielding glowing laptops, pushing sounds to individual diners like peas on a plate.

Pushing sounds to individual diners like peas on a plate.

I take my seat. In the middle of the table, instead of a candle or flowerpot, is what looks like a small cycloptic alien, watching me: a wood stand embedded with a single speaker, designed by Houge’s collaborator and fiancée, Jutta Friedrichs. Soon a server drops a plate of bread in front of me. The room-wide drone continues, fluxuating in nodal degrees outside my comprehension. I take the bread in my mouth and taste bitter, salty: the taste of seaweed, the taste of baked ocean. Bits of nearby table chatter washes ashore. I’m conflating sound and flavor already and the Opera hasn’t even begun.

Houge got his start at Sierra in 1996. His first game was Leisure Suit Larry 7, creator Al Lowe’s final title in the series. He would go on to compose the music for Arcanum, a 2001 PC hit from the same designers of Fallout. Even then Houge was not above taking risks, writing the soundtrack entirely for string quartets. Gamers of a certain ilk expect bombast, a great many crashing of cymbals to score their epic achievements. Houge gave them nuance and players responded; publishers even saw fit to share the sheet music on their website, an early kind of interactive publicity.  After Sierra’s demise he moved onto Ubisoft, where he worked on Tom Clancy’s EndWar among other projects.

Today he teaches videogame music at the Berklee College of Music, where lessons involve both the programming and aesthetic choices unique to the medium. Outside the classroom, Houge produces numerous sound installations, with one based on audio recorded in a subway, another on an isolated island. But on this day, his ears are attuned to a symphony of another sort: the clinking of forks, the chewing of mouths. For the next few hours, we are his on-screen action. He scores it all.

Some might say games are trivial while food is a necessity; I’d argue pleasurable leisure is one of the important distinctions between our species and those other, less-upright animals.

The menu introduces the event as a way to “explore a meal as a communicative medium to tell the story of sustainable food practices.” On the inside is a map, detailing the step-by-step process of delivering this food to my plate: from Pete and Jen, growers of chicken, pigs, sheep and rabbits in Concord, MA; to Metro Pedal Power, eco-friendly “pedal trucks” that distribute up to 500 lbs. of goods to and from businesses in and around Somerville.

And so when I slice into my Red Bro Chicken with Bacon and Chestnuts Triticale, Dilly Beans, and Waldoboro Green Neck Turnip, I hear Jen speaking to me, describing how, when buying chicken “you don’t have a choice in the grocery store… you don’t even know what breed it is. It’s just chicken,” and it dawns on me that I’ve never been bothered by this outrageous lie before, that I’d notice if a friend introduced me to their roommate as “human” but I’ve never once blinked at the similar anonymity of something I’ve eaten for close to thirty years.

Bond makes a new menu every day. To compliment the meal, Houge composed around textures, and pungency. He wanted to create the same audible contrast a great chef does using chaud-froid, the same reason bacon’s blend of salty and sweet gives it that uniquely satisfying flavor. There’s a hint of Trent Reznor in here, a mix of industrial noise and provocation with an underlying beauty brought on by the medium itself. No surprise, Reznor is a veteran of game composition himself, creating music for id Software’s Quake and recently contributing to Call of Duty: Black Ops 2. 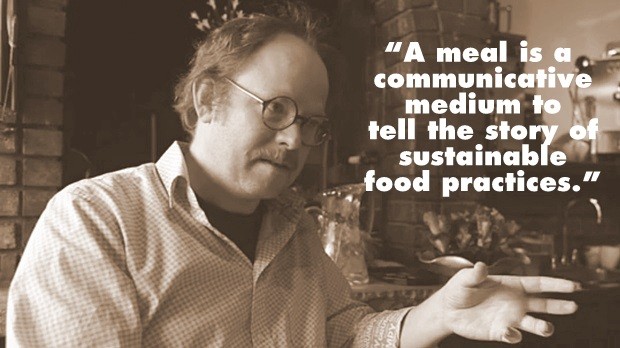 In most games, this soundtrack isn’t meant to drive the action, but supplement what we’re already doing. The ambient swells remind me of the second half of David Bowie’s Heroes. If Bowie and famed composed Brian Eno made their Berlin Trilogy today, odds are it might have been a trio of experimental indie games released on Apple’s App Store for 99 cents each. Espresso beans grind somewhere to my right. An errant note, or unpredictable snare roll?

The pattern resembles its creator’s own path in sound design.

The overriding drone from the room’s central speakers, custom-designed by Stephan Moore, isn’t even a sequence on loop, but based off an algorithm originally devised for menu music in Tom Clancy’s EndWar. The difference is subtle but important: one is a completed passage on repeat; the other is a shifting, moving entity. The pattern resembles its creator’s own path in sound design.

That Houge left his job as an audio director of games and finds himself scoring this other kind of interactive entertainment (for eating at Bondir is nothing if not fun) seems to make a kind of backwards sense. Some might say games are trivial while food is a necessity; I’d argue pleasurable leisure is one of the important distinctions between our species and those other, less-upright animals. Certainly, butter-poached Scituate Lobster paired with a glass of 1997 Laboure-Roi Chassagne-Montrachet Jeroboam is somewhere between “gold-plated Monopoly piece” and “personal aircraft hangar” on a list of basic human needs. 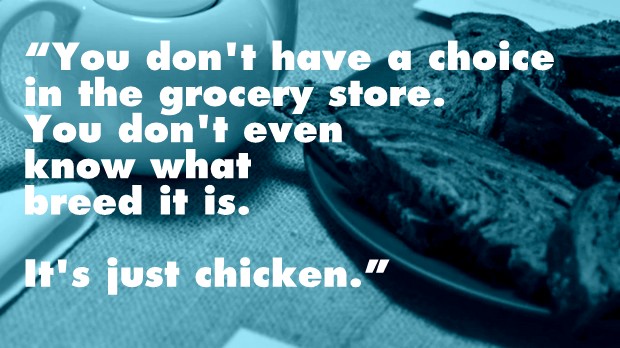 But it’s always easier not to pay attention. That so much time and effort have gone into this Food Opera speaks to the length we go to not only make sense of our surroundings, but imbue them with a sense of our own making.

In a videogame, the press of a button makes an on-screen gun fire; the crack of a report is instant, even though it took a long sequence of code to get there. This chocolate dessert, with star anise and parsnip and smoked tea froth, is in my mouth in five seconds, while Houge’s ambient chimes, emitting from speakers made by his girlfriend, reminds me of nighttime. Somewhere, a hum of cicadas signals my meal is over.

A simple result borne from a series of complex steps. Sounds like living.