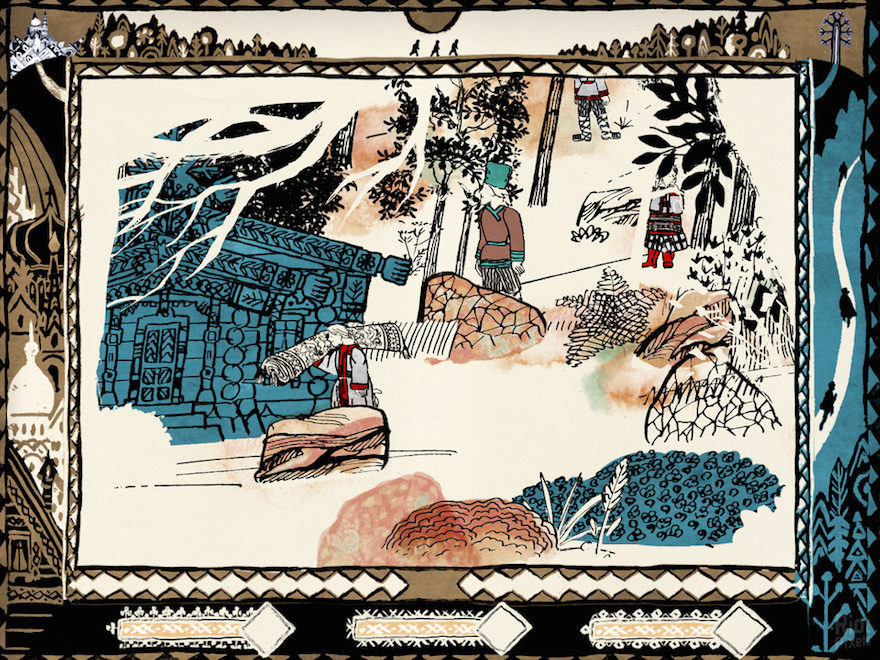 Forest of Sleep, the procedural adventure inspired by oral storytelling and the latest brainchild from the creator of Proteus (2013), looks more like a children’s book than a videogame. Early screenshots unapologetically resemble artwork, illustrated with bold borders and thick lines and no UI in sight. In an interview with the Forest of Sleep team, producer Hannah Nicklin talks to artist and animator Nicolai Troshinsky about his illustration background, and connection to the Eastern European folklore that permeates their game.

Troshinsky discusses how he and Ed Key, the co-creator of Forest of Sleep, tossed around ideas after meeting at IGF in 2011 and settled on the idea of Russian folktales: they wanted to overcome the “self-referential” nature of many videogames and draw from sources other than gaming’s common inspirations. Animation and film’s influence led to the current look of the game, which lacks speech or text. Troshinsky instead creates a visual language that guides the player through their own story, a fairy tale dreamed up in the minds of three children that fell asleep around a campfire.

While discussing his graphic inspirations, Troshinsky references Czech illustrator Štěpán Zavřel, as well as Polish artists Janusz Stanny and Józef Wilkoń. He compares Eastern European animation to the style more common in the West, pointing out that Eastern animation is “fascinated by the ordinary” and tends to be less flashy. His inspirations prefer a slower style, filled with tiny gestures, that doesn’t try to be thrilling or grand. Luckily, this ties in well with Forest of Sleep’s wish to go entirely without words. Troshinsky is tasked with figuring out how to communicate these stories visually, and bridging the “imaginative leap” between the game and the player.

Forest of Sleep is due to tell its story in late 2016, but Twisted Tree promises many more posts exploring behind the scenes before then. With such a beautiful game, it’s a small wonder that the team has so much to say.

Read the full interview with Nicolai on Forest of Sleep’s blog.