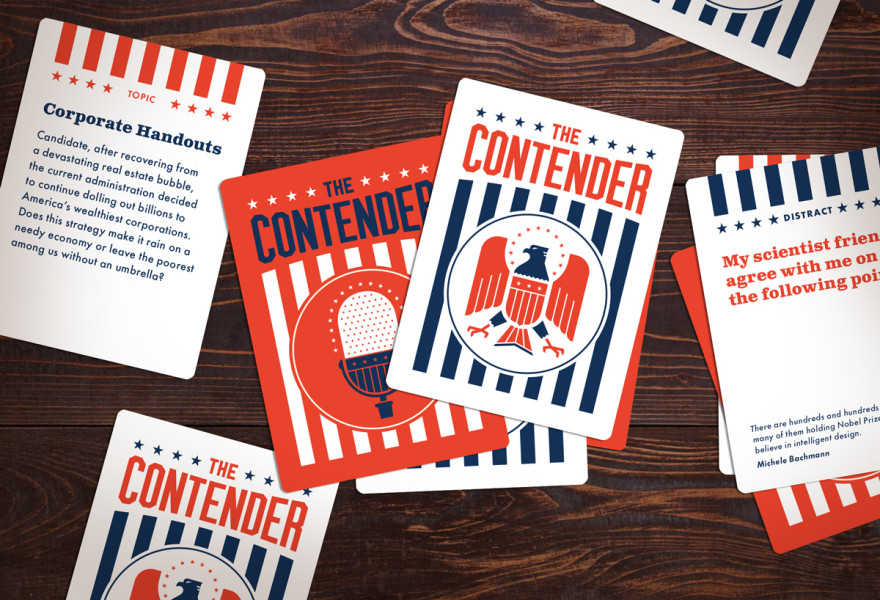 The Contender is a tabletop game that combines the rhetoric of political campaigns and the mechanics of Cards Against Humanity, all of which raises a thorny interpretive question: Would tonight’s second Republican presidential debate be improved if it were replaced by a televised game of The Contender?

To answer this question, let us consider the rules of each debate. CNN’s primetime debate and the straggler’s undercard that precede it surely have rules, which probably involve speaking times and not interrupting others. If history is any indicator, those rules will probably be ignored by at least one of the candidates, and few—if any—repercussions will be meted out. (Just ask Megyn Kelly how that system works.)

we’re going to be doing this for a good, long time

The Contender, on the other hand, has a certain amount of flexibility built into its design. In the game’s Kickstarter video, its developers explain that they are curious to see how its rules will be bent and toyed with. This seems preferable to the faux naiveté of network news anchors. Anyhow, should you really care about the rules, here’s how The Contender works: One player assumes the role of the moderator and selects a topic card from a central deck. The other players formulate answers using the fact and arguments in their hands. The players’ cards are based on great moments in previous campaigns. The moderator decides which player has the best answer to, and that player assumes the role of moderator for the next round. The Contender is simultaneously more structured and more flexible than a presidential debate. It’s the best of both worlds!

The game ends…at some point…surely it must? This appears to be an accurate description of both The Contender and America’s endless campaign seasons, but I can only speak with any certainty to the former. Look, we’re going to be doing this for a good, long time—well, at least for a long time—so you might as well settle in. And while you’re settling in, you might as well have some fun. At this point, most citizens are resigned to their debates amounting to little more than talking point competitions, but The Contender’s mechanics helpfully reveal just how mechanical these events are. Thus, in one of this election season’s great many ironies, tonight’s CNN debate might well be improved if it were replaced by a game that seeks to mock this very event.

Find out more about The Contender on its website.