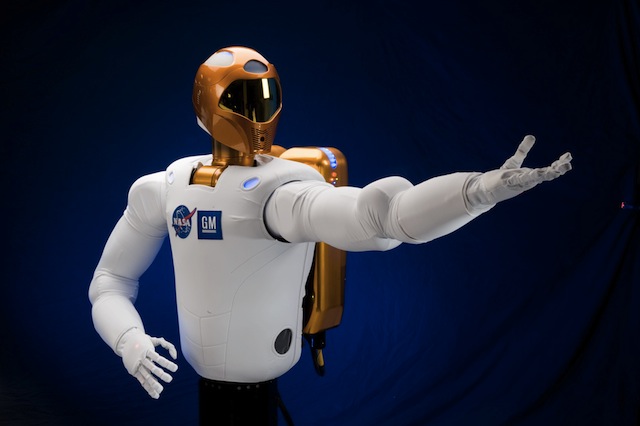 The NASA session at G.D.C., We Are The Space Invaders, came at the end of a long day. Everyone looked exhausted, the woman sitting next to me had her shoes off, and more than a few chairs were free. You could almost here a collective sigh as the two presenters, Victor Luo and Jeff Norris of the NASA Jet Propulsion Laboratory, showed us vintage clips of Spacewar! and established the predictable mantra that games and space are intimately entwined.

Yet, it ended with a standing ovation, a communal sense of amazement, and a pledge that NASA engineers are working towards a holodeck (Yep, like from Star Trek) that will let players control robotic avatars in space. Seriously!

The National Space Agency has clandestinely been snatching up game developers and hosting gaming events like space-themed game jams for a while now, but there has been little signal of their machinations. It turns out their software engineers have been up to much more than designing the rather uninteresting Mars Rover Landing, which simulates and promoted the Curiosity drop. They have been experimenting with Kinects, Wiimotes, data gloves, and so forth. Luo demonstrated how he could easily control with a motion camera a robot called Athlete, reaching with his hands to manipulate its claw-like appendages.

It’s a lofty and incredible mission, but walking out of there, I got the feeling that everyone in the room believed it.

We’re talking about game devices and game interfaces for controlling giant “crazy, six-limbed spider robots” that hover in zero gravity, and what more or less amounts to Dance Central for gyrating ultra-sophisticated shuttle pilots that look like androids, (or members of Blue Man Group). As public interest in space exploration has been on the wane, the session was obviously intended to inspire and excite those in attendance about space. And it worked. It gave me chills when Norris closed with the line “humanity’s destiny is space,” (although that could have something to do with the fact that I needed to pee and had had nothing to eat.)

The highlight of the hour, or rather the coolest thing, (and I’m aware that “cool” isn’t a descriptor I’ve used in relation to space since field trips to the space center in Huntsville in intermediate school), was a live demonstration of Luo maneuvering from over an internet connection a large and potentially dangerous hovercraft. This arachnid of a ship literally weighed a ton and was thankfully located safely back at the space lab, and we could watch the interaction via webcam. Because the beast has six legs, the most convenient way to control it, they said, was with a data glove that Luo wore on his hand, each of his fingers synched to a leg. He wiggled his pointer, and, after they worked out the kinks, the robot followed his command. Truly a sight of spectacle.

As for the holodeck, NASA aren’t there yet, but they hope that one day all of us earthlings will be able to stand in front of a screen and control our own killer robot in space. It’s a lofty and incredible mission, but walking out of there, I got the feeling that everyone in the room believed it.