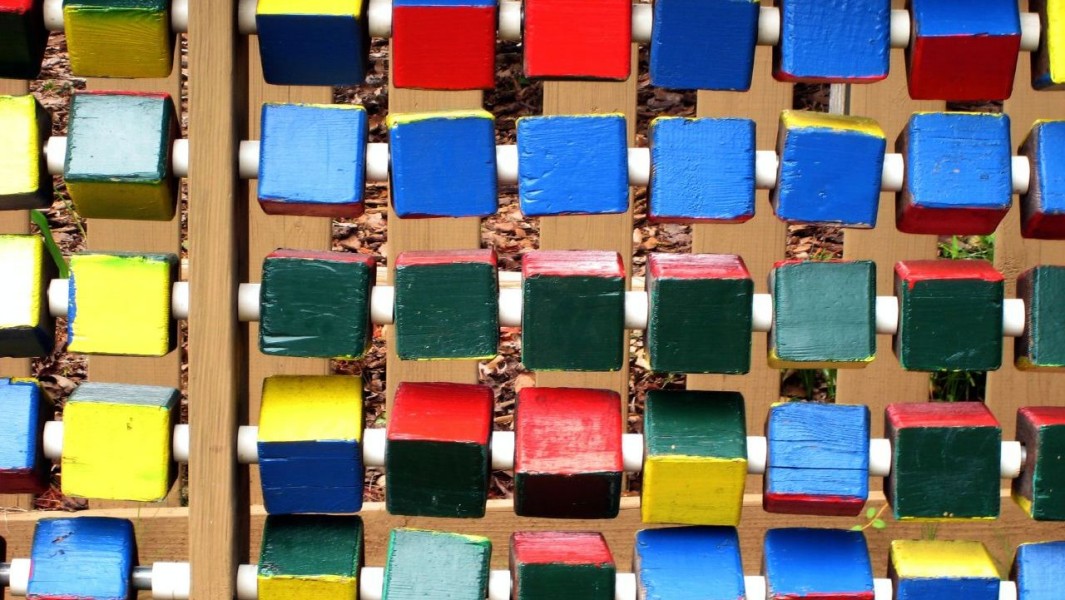 Most of us have gotten bad news before. Some of us have an awful shirt, or an angry cat. Some of us have played an unfair pinball machine. Hopefully only a smaller margin of us have had a near-death experience. Some of Zen Rankin’s family are into hammy-scammy life-hype coach Tony Robbins, who, among the other items, has manifested into one of the possible encounters in Hard Livin’, Rankin and Marcus Kamps’ room-spanning board game about life. Though that’s not to suggest it at all plays like the Game of Life.

“Going through a hard time in life is conducive to being uninformed, with what’s going on, or feeling lost,” says Rankin, who is soon to be a father. “You don’t know what you’re doing other than moving forward. That’s the general concept of our game: if you don’t cheat or look too far ahead you’re going to discover what happens as you land on it. There’s something fun in that.”

The Hashtag Gallery walls are gridded with hand-painted pixelated tiles, scrawling along like some retro game hieroglyphics. Some unmistakable and cute, others a blocky blur with a magic eye puzzle effect. Each display an image relating to simple, surreal, affecting and affable encounters throughout life. In-game, some chip at your stats (Gumption, Vigour, Deeds), some strictly improve them, some offer a trade and others offer an ability if you’ve buffed the right points. You can lose some gumption when a “Gumshoe” interrogates you, but you can earn some back on the night of a “Really Cool Moon.”

Hard Livin’ is played with a spinner, mounted on a wooden block, with pegs pinned in to keep tabs on your three stats. You can move up, down, and forward as many spaces as the spinner rests on. You can’t move backwards, as life typically doesn’t either. You do your best not to get caught in a glut of negative experiences, shimmying along the wall with best intentions.

It’s a little bit Tokaido, a game about strategically amassing experiences, except now with the threat of weird tragedies. Certain instructions were left intentionally vague, a flexibility which allowed you to play competitively, cooperatively huddled around the same spinner, or going through it alone. I mean, this is a game about life. Because the gallery didn’t want anyone to walk away a loser, everyone who completed the game, regardless of points, left with similar prizes. I wondered if that was another cynical statement on life, but Rankin said they just didn’t want to offend any of the sponsors.

“We took a lighthearted approach,” says Rankin. “The notion of Hard Livin’ is a hokey way of saying, ‘Oh, we’re going through a difficult time.’ There had to be some kind of story, something to relate to. But we didn’t want to put a lot of rude things in there. We also have to satisfy the aspect that this is an art show.”

This very entanglement—of interactive work at formal galleries—is currently being unravelled, designers often meditating on play that functions both publicly and critically. Boardgames, then, offer some more conundrums. They’re more familiar than a digital game, but they’re also a lot more intimate, soaking in time and atmosphere within a confined group, which is often not a gallery’s maximum capacity.

Then it may help that this was one of Rankin’s first experiments with game design, seeing as he saw his priorities on the public turnover than a rich set of rules.

“The uniqueness of this room was a big part of it,” says Rankin of the Hashtag Gallery, which has a subtle curve on its west wall. “How far back or how close you stand to a piece. How much proximity you are to other people.  Are you drinking? Are you with your family? With friends? We wanted all of that in there.” And let me, for one, state that juggling a notepad, pen, wooden spinner and a bottle of beer was a game within itself.

“The uniqueness of this room was a big part of it”

There is a friendliness to Hard Livin’, more insinuated by the shoeshine phrasing of its name than the sour words. None of the spaces, even the most damaging, entail the death of a family member or a scarring loss. The most unsettling variable is Nowhere, which casts a sprawled void of pale nothingness soon after you head up from the back wall. So in that aspect, there seems to be some pulled punches. But with that there is a nice goofiness that means families can stop by over the weekend, after the wine-scented reception has dissipated.

It may not be a hardened work, but it is a hard step towards how we can transform an analog space into something playable. Make your own spinner, buffer the imagination and you can create a boardgame out of any gallery; assigning consequences to each Group of Seven vista next time you visit the Art Gallery of Ontario.

Even if during that session you don’t land upon the pixelated ghost of a California Raisin, there’s likely something for everyone to take away. After all, many of us have received bad news. Some of us have encountered a “questionable doorway,” or a photo with unflattering lighting. My sympathies if your boss called you in to work over the weekend. I’d be surprised if you’ve never seen a banana. One of Hard Livin’s spaces is just a banana.

“Some of these spaces are deceiving,” says Rankin, “and that can just be us screwing around. But life can also be deceiving, and that’s a Hard Livin’ lesson.”