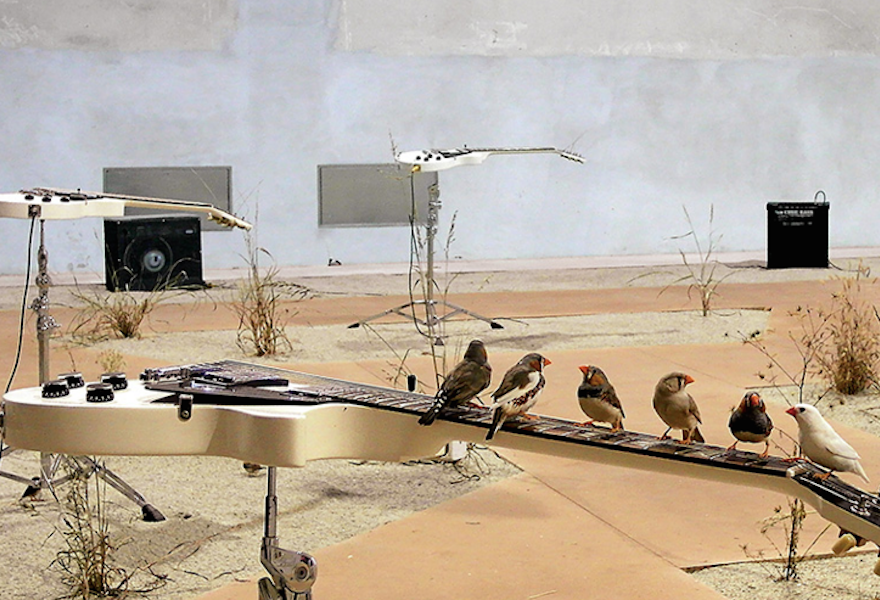 I’ve been trying and failing to learn how to play guitar since high school. No matter how many classes I take or Rocksmith sessions I play, the seeming complexity of the instrument always scares me away from any higher level practice. Now, to add salt to the wound, I’m being upstaged by birds. But to be fair, there are 70 of them.

In an exhibition that went up at the Montreal Museum of Fine Arts on November 25th, French artist Céleste Boursier-Mougenot released 70 zebra finches into a room where the only perches were 10 Gibson Les Paul guitars and four Gibson Thunderbird basses. As the birds simply do what they do best and land on the guitar strings, they naturally create what Boursier-Mougenot refers to as “living music.”

“I want to make music from these birds on the wire”

“Looking through the window, my feeling was that I want to make music from these birds on the wire, and 30 years later I did this,” Boursier-Mougenot told Canada’s CBC News, explaining his childhood inspiration for the piece. With a history in theatrical composition, Boursier-Moguenot has been working since 1994 on combining his musical talents with visual arts to create new styles of live entertainment from unorthodox sources.

As the birds “play” their guitars, groups of 25 will be slowly lead through the exhibition room, encouraging the birds to fly around and create brand new soundscapes, making the visitors a part of this living music as well.

While one might expect the resulting music to have a random feel to it, the actual sound of the exhibit has more of a rippling effect, creating a soothing melody out of all the chaos.

The exhibit has previously travelled from New York to Paris to Milan, and will be making its Canadian premiere on its 19th outing. Visitors can catch this brand new type of songbird in Montreal up until the exhibit’s closing day on March 27, 2016.