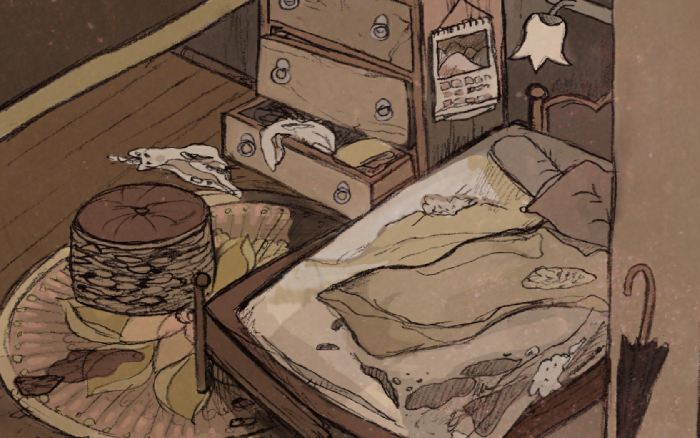 Forsaken is a game that posits a creeping question: what do your dwelling and possessions reveal about your character? It employs you as someone who is sent to declutter and clean up abandoned houses. The one you get to mouse over is an omnishambles; a putrid disarray of residential flotsam.

As you rifle through broken drawers and punctured mattresses you find items—handcuffs, scissors, packets of pills, a dildo—and are asked to choose from three possible reactions to each in order to build a vague idea of the previous owner. “Is this to hide fingerprints?” or “Is this for work?” read two sentences that emerge alongside a purple pair of latex gloves for to select from.

Being a disgusting wreck of a home, these options fall loosely under a number of despondent or criminal possibilities: a sex worker, a pedophile, a burglar, or maybe a parent with a catastrophic child. The ending analyzes all your choices to hopefully confirm your suspicions with a letter in scrawled handwriting from the absentee you had pictured.

the anxiety of having someone inspecting our living spaces

My Serbian sex worker had written to her daughter, warning her of the unspoken dangers and ugliness of the European promise that she had to endure, and as I was able to realize with my rummaging. It reminded me of this real letter that a person had left for the person who job it was to clean their abandoned home—”when you lose hope after struggling so hard to always do the right thing … and no one will work with you … you just stop caring,” they say to explain the mess.

While interesting as an epistemological study of how we perceive strangers, I found that Forsaken also touches on a subject that most residence owners (and renters) will be familiar. Put the shoe on the other foot, and instead we find the anxiety of having someone inspecting our living spaces, exposing your private enclosures.

There’s a series of judgements that a stranger to your home cannot refrain from making when entering your abode for the first time. This is known, so you want to create the best impression possible, but also not appear to have made so much of an effort to be suspect of clandestine activity. Unless, of course, you don’t care at all and roll happily around in a filth of smells without source, clothes scattered as if struck by a bomb.

Those who do care will clean up frantically before their guests’ arrival, stashing away bills in bread bins, throwing a vacuum cleaner around in fits. This is what I have learned from my mother. And so I carry out a similar preparatory routine when knowing an alien will traipse my cream carpets and burgundy tiles. In my new apartment, which I care for dearly, I’ve even gone through mock guided tours of each room, seeing through imagined eyes to catch any visible scandals.

Even then, I still have to fumble through an explanation of my shelf of faux-snuff movies and imported depravities as being part of my cult film studies at university. Thinking on this while playing Forsaken has led my curiosity toward wondering what my possessions would say about me if I were to die this instant. I think back to that letter and start to worry that it would give the false impression. Maybe I should also write a letter…

You can download Forsaken for free on its Ludum Dare page.