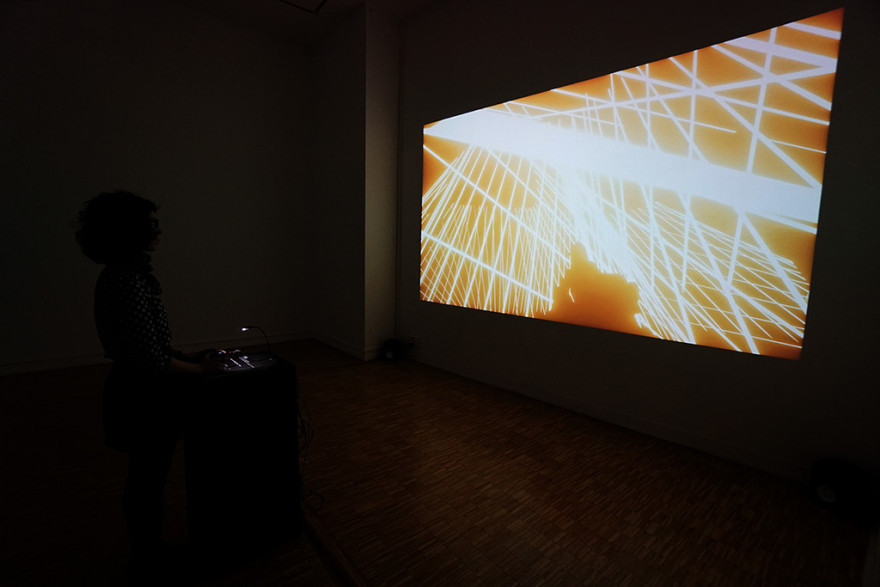 Hugo Arcier’s FPS is about last year’s attacks in Paris, though it is not immediately clear in precisely what way. We know this because the artist says as much on his website: “FPS is a post November 2015 Paris attacks art piece. The artist deals with blindness hijacking video game codes, in particular of first person shooter game. The only visible elements are pyrotechnic effects, gunshots, muzzles flashes, sparks, impacts, smokes.”

In practice, what that means is that a black space is lit up by flares from something vaguely resembling a videogame gun. They linger in the air, like lasers at prog-rock show. The effect is hauntingly beautiful.

That, in turn, raises a troubling question: How many rounds are you willing to see fired in the name of sustained beauty? The rounds illuminate vague silhouettes; you are not simply shooting into the void. Actions have no clear consequences in this world, but it might be best not to find out. Would you rather just sit in the dark than risk whatever moral complicity Arcier is getting at?

These are good questions, though FPS does not seem sure of how to answer them. Insofar as it is an art piece about the Paris attacks, which included the killings at the Bataclan concert hall, the strange overlap between rock show and gun imagery is unsettling and imprecise. Moreover, it is not entirely clear where the videogame aesthetics really fit in to this story. Is the viewer to assume that they have some connection with terrorism? In that respect, FPS lacks the moral clarity of Pippin Barr’s A Series of Gunshots. FPS is beautiful enough to captivate a viewer and make them think about these questions—and for that it should be lauded—but it falls short once you start looking for answers.