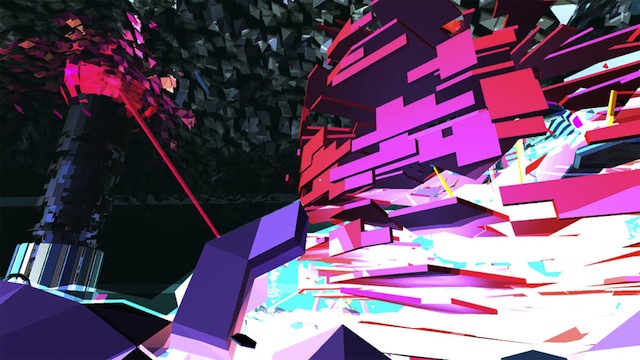 Synesthesia, or the mental state that blurs the boundaries between sight and sound, is a rare neurological condition. That is unless you’re playing Fract, where it happens all the time.

“The audio is so intrinsically connected to the mechanics of the puzzles. Because many systems are plugged into what the audio’s doing, we’re going to have visual changes,” says the game’s designer Richard Flanagan in an interview with Rock Paper Shotgun, who has created a polygonal, spacey environment where players could discover sound.

This idea behind this first-person game is to incorporate playing a synthesizer into something more people are familiar with, interacting with a game in first-person perspective. The aim is for players to solve puzzles by composing their own music, becoming familiar with the intricacies of sine waves in the process.

“It’s really intimidating to walk into a music shop. There’s a really cool music shop here in Montreal that sells all kinds of modular gear, and even I go in there and go, ‘Oh man, I don’t want to touch anything,’”  he says.

But Fract is more than a learning tool for the aspiring Brian Eno. It’s also a world to explore for its own sake.

“It became fun again, just tweaking knobs, solving puzzles and making sounds. And not necessarily hyper-static sound and music, but music that is a result of your tinkering or that, depending on the time-of-day cycle in the game, maybe you’re never going to hear again,” he says.