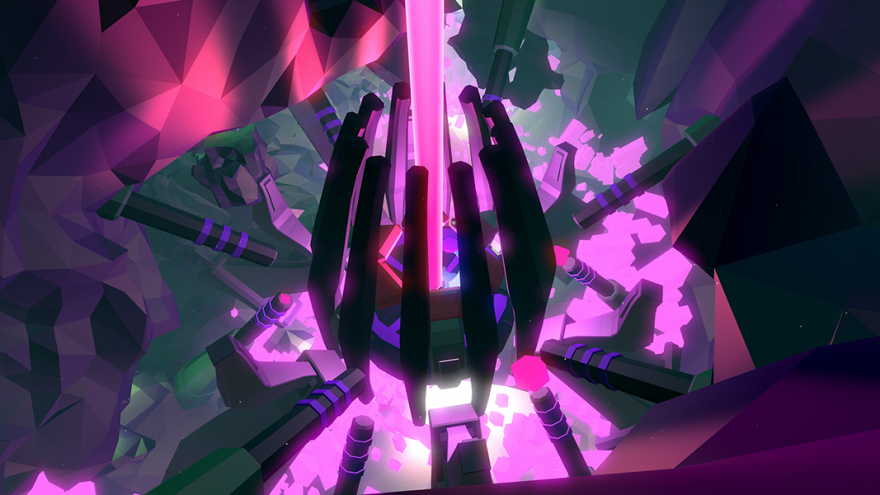 There’s something magical about electronic music. A single button can be programmed to transmit just about any sound imaginable, and plenty that you’d never consider otherwise. But how does something like a synthesizer actually work? I remember watching Radiohead perform “The National Anthem” on Saturday Night Live in 2000 and being enamored by multi-instrumentalist Johnny Greenwood and his menagerie of boxes, antennas, and cords. “I don’t know what he’s doing, but I know it’s awesome,” I thought to myself. The mystery of electronic music is part of its allure, acting as a curtain behind which production is done in secret. And if you’re like me and look at an image of what goes into, say, Orbital’s live performance rig, the apparent complexity of an army of humming, synchronized machines seems incomprehensible.

FRACT OSC is a virtual synthesizer/videogame that offers a look behind the curtain, framed using a gently sloped learning curve designed to introduce non-musicians to the world of electronic music production. FRACT contains two distinct parts: an open world and a studio. In the open world, you can solve puzzles that unlock synths and modulators for the studio where you can produce, record, and share music that you create there. The goal of FRACT is not so much to “beat” the game as it is to fully outfit the studio.

The open world area is a vast expanse of crags, caves, and cliffs divided into three color-coded paths (one for each type of synth). The landscape is littered with pulsing crystals and gargantuan, long-dormant machines, which are also brought to life through puzzle solving. It’s not just that accomplishing these tasks unlocks functions in the studio, but that the world itself is an abstraction of a synthesizer that you’re reactivating from the inside. It’s no coincidence that FRACT borrows some of its visual and sonic flair from the TRON universe, seeing as both play off of the mystery of how electronic mechanisms function by imagining large, habitable spaces inside circuit boards.

It’s a bit ironic that a game that seems designed to slowly lead players step by step to learn a specific set of music-making tools offers zero guidance as to how to actually play the “game” part of the experience. You’re dropped into a world with no direction and given full agency to figure it out for yourself. While FRACT does offer some visual clues about where you could go and what you could do, until I understood the language it uses to communicate these tips, I spent hours wandering aimlessly around the world, simply soaking in the neon-bathed obelisks and glowing wireframe prisms. FRACT looks and feels a bit like a less action-y Metroid Prime game in this sense, but while Metroid presents players with puzzles that require items or skills that they have not yet obtained, in FRACT all but the final puzzles in each area are solvable at any time.

The puzzles in FRACT progressively shift from musically abstract path-building scenarios to direct synthesizer analogues, which gradually made me feel more comfortable messing around with the production tools, but still a bit lost as to how to compose music that sounds any good. I suppose it’s just the sort of thing that requires a lot of trial and error, and I understand that at some point you have to get kicked out of the nest and onto the step-sequencer, but I think there’s a missed opportunity in the final puzzles for each area to lean into compositional basics and how the lead, bass, and pad synths are supposed to work together. Instead these puzzles require memorization of modulator settings hinted at throughout the open world that don’t lead anywhere beyond simply punching in the correct codes.

Games with music creation mechanics walk a tightrope of sorts, balancing between the desire to offer a robust set of production tools and the desire to be a videogame that has mechanics and objectives outside of music making. It’s FRACT’s biggest success that the game maintains that balance as well as it does. Every little victory in the open world had me scurrying back to the studio to try out my latest unlock. Playing in the studio is just as entertaining as playing in the open world, even though each illustrates very different forms of play.

FRACT proves that it’s through your own creative input that you can continue to surprise yourself.

I have an occasional worry that the more I learn about how electronic music is made, the less magical it will feel—that I’ll know too much and only see the methods of production instead of completed works. FRACT offers a glimpse into what that reality could look like, but presents a new source of magic at the same time. Instead of bobbing your head out in the audience, now you’re behind the decks, steering the ship wherever you want it to go, even when you don’t know where you’ll end up. FRACT proves that it’s through your own creative input that you can continue to surprise yourself beyond those initial magical moments. It’s true that FRACT isn’t the most mind-bending puzzle game out there or the most powerful music production software on the market; its triumph is in forging a middle path. And for what it’s worth, I still don’t entirely know what I’m doing with a synthesizer, but I feel like there’s a chance it could be awesome.