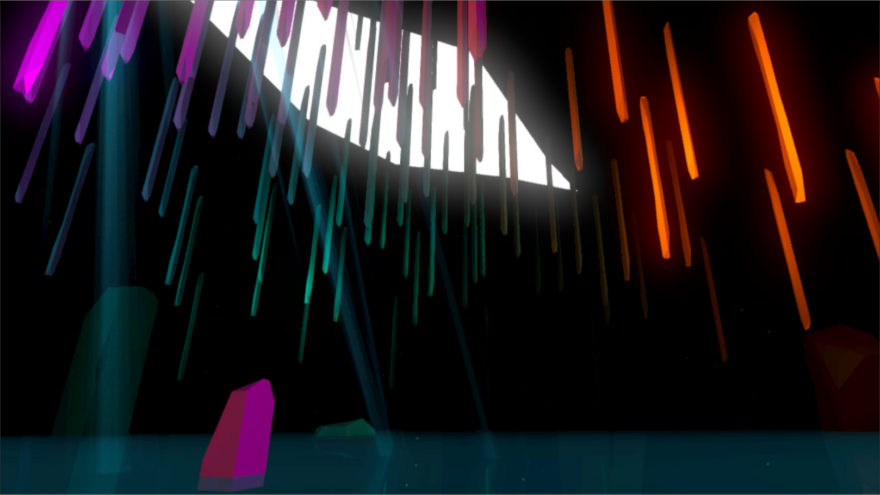 Art is a weapon. A weapon against the patriarchy, against the status quo, against hate, against The Man. But in Fractal, a new virtual reality game from Phosphene Designs, art is a different kind of weapon: it’s a literal one.

In Fractal, the player wields a paintbrush as their instrument of choice in VR—a brush that’s akin to the popular art and sculpting tools of late. “The concept of Fractal actually came from Tilt Brush, funny you should mention that,” wrote Bo Scott Pu, 3D artist, animator, and self-proclaimed “decider-of-what-to-eat-for-lunch-everyday” at Phosphene Designs over email. The brush itself, Pu tells me, is more of an indirect weapon than an active one. While the player paints their way through the world, shielding themselves from enemies with the digital art painted in the process, a level’s end beholds an interesting sight: a digitally-tangible visual representation of their progress to that point. All through the floaty brush strokes swiped through the digital air.

“We want the player, at the end of the level, to be able to look back at their progress and see that they’ve not only defeated the challenges in the level, but also have created a piece of ‘painting’ from their motions,” wrote Pu. “Even the strokes that you draw are not so violent in that they really act more like a shield than a sword, blocking and protecting you from the enemies.”

Fractal, in a sense, memorializes your actions in the game. Instead of moving and mashing your way through an environment with no means to remember it other than memory, your paintbrush always leaves a trace by mapping out your path. The paintbrush’s everlasting strokes leave a story behind; an instrument to visualize a quest, rather than a fleeting visuals-free recollection.

With a recent release on Steam Early Access, Fractal still has a long way to go until it sees a fully polished release. Among the future additions include “a fully realized story mode,” one that explains the game’s world and gives purpose to what the player is doing. Harboring inspirations from the videogames Journey, Transistor, Limbo, and surprisingly, the Souls series, Pu pegs Fractal‘s overtly stylized visuals as a way to keep the game sleek yet elegant. “The Souls series comes to mind, where just standing in a particular environment can tell you its rich history and stories of that place,” wrote Pu.

Fractal is currently available on Steam Early Access for $4.99, and will remain in active development for 4-6 months before a full release. You can watch a trailer for the game above.