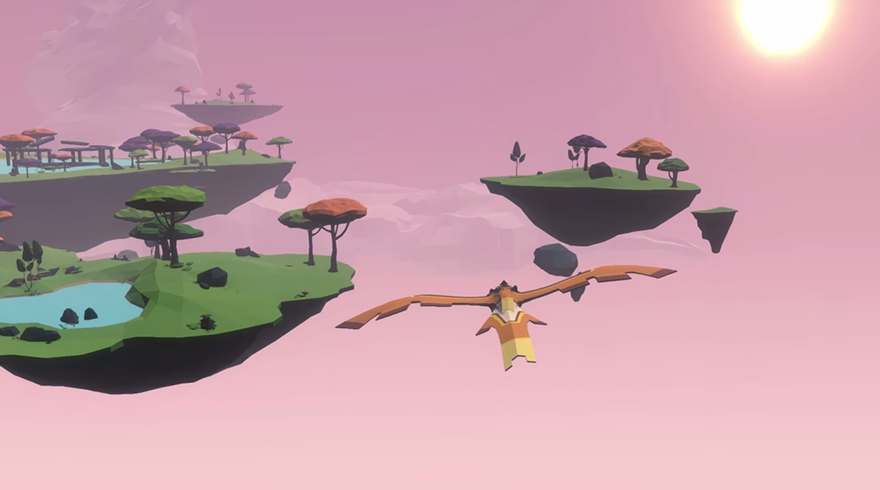 A blue sky riddled with floating islands, purple deer, and idyllic waterfalls—the opening scene of Aer’s trailer is a scenic glance at an abstract cubist-esque world. The expanse hovering before us is at peace, but we know that there’s so much more to see. Taking in the view with us is Auk, a pilgrim girl who, after turning to look at us, dives off the edge head-first and transforms into a skybird with a spin and a flurry of light.

The bird is reminiscent of The Legend of Zelda: Skyward Sword’s loftwings, but this world seems like so much more than Skyloft. The orange bird ducks below fractured Eden-like islands, through the storming broken pieces of a frozen tundra, close enough to the airborne landscapes to skim them as she passes. The trailer reminds us what Aer is really about: exploration of a lingering world, splintered and unknown. It’s a thrilling mix of fear, as Auk leaps with the wind beneath her, and the delightful promise of basking in someplace new.

When Auk lands on the grass before a cave, her bird form dwindling away with the wind, she approaches something not yet featured in the trailer throughout all her adventures; pitch black darkness. The whimsical music fades into an eerie hum as Auk passes the carved stone slabs littering the entrance of the cave and looks at the walls around her with wonder. Whereas her steps once seemed confident and sure, they now seem layered with hesitation. The invigoration of something new is tempered with the intimidation that comes with the unknown.

the delightful promise of basking in someplace new.

Auk approaches a glowing shrine deep within the cavern. Hovering through the air in the shrine’s clearing are floating flakes of snow—or is it ash? A tall statue of a woman holds out a glowing treasure and our protagonist accepts it. Immediately, from the darkness behind the shrine, a stone beast rears it’s head, and the shrine collapses before Auk, who falters to the floor, alone and afraid. With a roar, the lights go out and the screen fades to black, leaving only the eyes of the massive beast. Suddenly, even after witnessing the world with a bird’s-eye-view, we are left feeling smaller than ever.

But, just as we’re reminded of the world’s darkness, we get a glimpse of the light. Auk rises from the ground, the artifact in her arms glowing once more, to find herself surrounded by dozens of shining blue beings. The fear has passed and the wonder can take its place once more, leaving us more excited to explore than ever before.

Aer will be coming to PlayStation 4, Xbox One, and PC in 2016. You can track its development on its website.