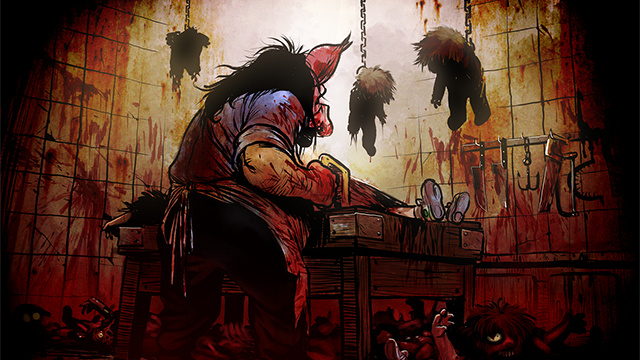 2Dark is a new survival horror game for PC, Mac, and Linux that is being developed by a cadre of industry vets led by Frédérick Raynal, the French programmer noted for designing Alone in the Dark, the genre’s progenitor, in 1992. The seven-member team have adopted the name “Gloomywood” for the project, distancing themselves from Atari, who currently holds the rights to Alone in the Dark. (And given the fate of Alone in the Dark, a brand marched straight to cash-in and schlock, it’s no surprise.)

2Dark’s cheeky name betrays its hand: The game’s characters and objects are modeled in three dimensions, but rendered in two, giving it a distinct sort of plasticine or Playmobil aesthetic reminiscent of the most recent Zelda, A Link Between Worlds. All of the textures are granular, like every surface in the world has been stuccoed. And when it’s not nightmare fuel, 2Dark’s concept art almost approaches cute. Très chibi!

The big difference with 2Dark, though, is that it portrays children. Children—a very real phenomenon—are often shunted out of games due to the level of violence a player-character can inflict, which would be unseemly and monstrous if bidden on them; that, or the inability to write their parts convincingly. In 2Dark you play as Mr. Smith, a criminal profiler who must rescue kids who have been nabbed by several serial killers. The first killer to have been revealed is a one-armed man in a pig mask they’ve taken to calling “Lewis”. Très Miami! The developers state on the Ulule page that “they don’t want to glorify this kind of individual” which is heartening.

Disheartening is the fact that 2Dark kicks off when Mr. Smith’s wife gets fridged—that is, the narrative trope in which a fictional woman’s life is cheaply spent solely to make a male character’s backstory or circumstance more interesting. A disproportionately large number of female characters have been permanently shelved this way compared to male characters, which cements its status as a gender double standard. It’s employed with wild abandon in all forms of media, and videogames are not immune.

But 2Dark is implementing some interesting mechanics that haven’t been tapped quite so often, such as, uh, child-management elements. The children Mr. Smith rescues in serial killers’ lairs immediately follow him like ducklings, and once he’s got a gaggle going will begin to bicker and whisper, prompting him to use simple commands to maintain order long enough to reach the exit. “Dark zones” in which your only clue as to friend or foe are audio cues add another wrinkle.

It wouldn’t hurt to scroll down the 2Dark development blog, if only to see what a French game that isn’t a megabucks Ubisoft production looks like. You can read more at the game’s Ulule.