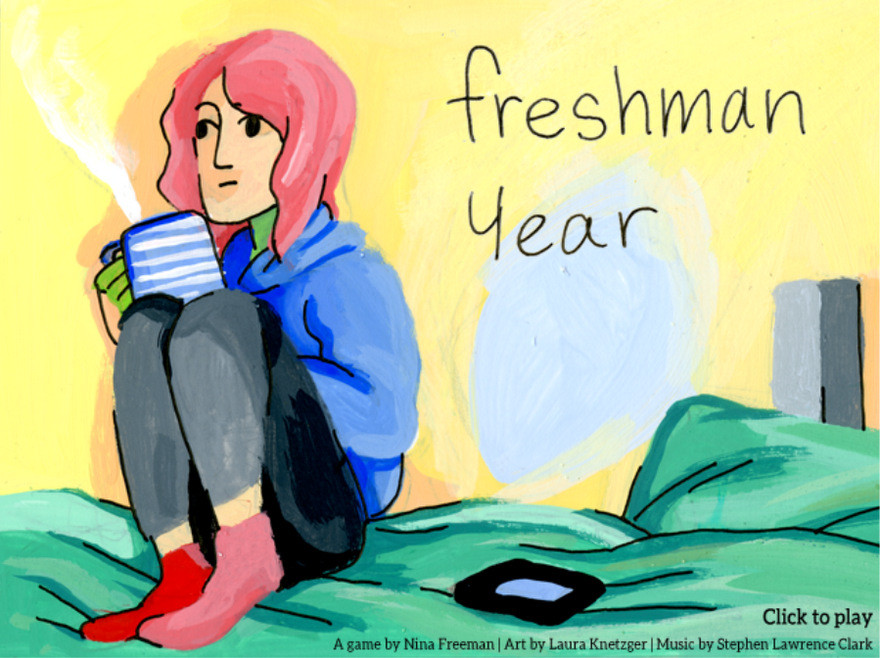 Game designer and Kill Screen alum Nina Freeman has a talent for making brief but moving games. Her stories are often styled as simple vignettes that elaborate on a memory or a moment in the life of a single character. As she told Kill Screen last year, “[game writing] is really about boiling the mechanics down to one core interaction that’s only there to communicate something about a character.” With this focused eye, Freeman is able to accomplish a lot in a small space.

The particular vignette depicted in her new game Freshman Year is a painful one. The protagonist, also named Nina, makes plans to go out to a bar with her friend Jenna. But when Jenna ditches her to go buy some pot, Nina shows up at the bar alone. Over the next couple of hours, you send several texts to Jenna, who never responds. Finally, after stepping outside to look for Jenna there, Nina is sexually assaulted by the bouncer on her way back inside, the same bouncer whose friendliness charmed Nina earlier.

Freeman is able to accomplish a lot in a small space.

If you’re attentive to the tone of the game, the abuse doesn’t come out of nowhere. It’s not like in a horror movie, where the mask-sporting killer bursts in on a victim who is otherwise blissfully unaware of what’s going to happen. The overriding tone of the whole story is worry, of an especially ominous sort. From the gloomy musical drones, to the dizzy hand-painted artwork, to the dialogue options that show Nina getting increasingly uncomfortable, Freshman Year gives you several great narrative and design cues to lead you to suspect that all is not well.

The effect is that the climactic scene seems as inescapable as it is infuriating. Whereas you’re usually able to click patiently through each scene at your own pace, the bouncer’s attack is shown in a handful of frames that flash by irrespective of your input, lingering on groping hands and distresses postures.

The pervasive sense of anxiety is particularly stirring as it confronts our tendency to think of acts of abuse as merely isolated incidents. On the surface, they are jarring breaks from the day-to-day in someone’s life, but they are also symptoms of a deeper problem, namely attitudes about male sexual entitlement that many women face regularly. Considered in this light, the game’s title has a chilling effect, as if it suggests, “This is the start of your new, adult life—your freshman year.”