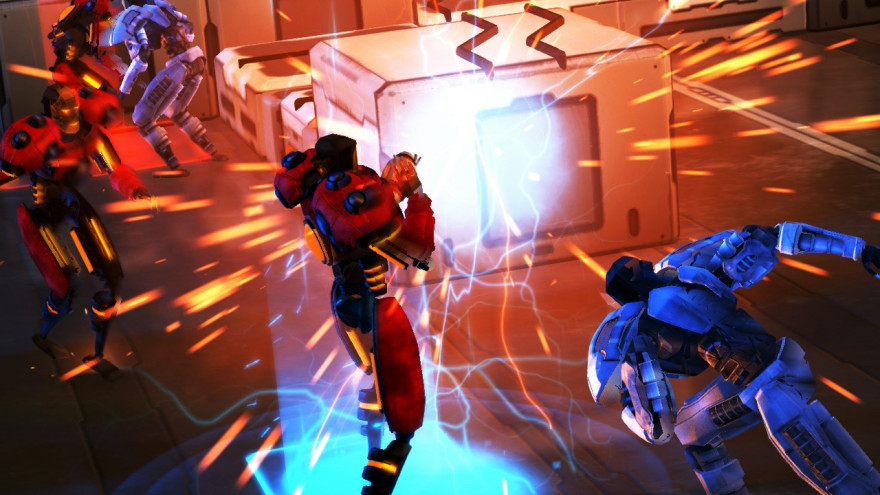 Frozen Endzone isn’t a sports game. This isn’t fact; just denial. There are robots clashing into puffs of sparks, and volcanic netherworlds erupting with gushing lava behind its raised arenas, even the cheering low-res crowd is absent. This can’t be a sports game.

Mode 7 Games are determined to make exceptions in the genres I can only groan at: strategy and sports. Mode 7’s previous effort—and predecessor to Endzone—Frozen Synapse was an incisor-sharp top-down strategy shooter with synchronous turn-taking, coated in Tron‘s shade of electro-blue. It got quite the fanfare, even from me, and I’m the guy who uses the full-length of an arm to sweep the pieces off a chess board as if commanded by a phobia.

Frozen Endzone combines sports and strategy into an intense, seconds-long battle. It’s football played in turns, complete with touchdowns, commentators, and pitch formations. I should be hiding in a corner, but here I am, roaring with each match won as if a long-time devotee.

Whereas Frozen Synapse wore a simple skin and retained a complexity in its tactical options, despite mostly being confined to a mouse, Endzone flips the mattress. The visuals now bear the detail of machine parts and steel cities, while the clicking and dragging is refined to drawing paths for your players to run along, and indicating where you want to aim a pneumatic over-hand throw.

With the options reduced, victory for either team is held in balance by the positioning of the walls that populate the pitch. They break the pitch up into corridors that allow for bottlenecking and boxing players in. Only the lower walls cater to cross-pitch passes. Hence, tactical play is held almost entirely in movement and formation.

The synchronous turns of Frozen Synapse return to ensure that each side tries to channel their inner mind-reader. Predicting moves and counteracting them is a key skill in Frozen Endzone. A mid-air interception or an explosive tackle resulting from a well-placed player will always turn the hand of possession. Attackers become defenders, and vice versa. This means that a winning touchdown is only ever a turn or two away for either side.

The result of this highly-strung design is a nervous energy that overcomes you when watching your moves play out with cinematic angles in slow-motion after each team has committed. Either your plan satisfyingly slips neatly into place, or you bite down hard, devastated. The commentators add to the competitiveness by pointing out the open wing you’ve been given to run down, or announcing your doom after a failed pass.

Frozen Endzone is a football game without all the, well, football. It demands machine-precision and comes without the commercial tie-ins. You get the impression that it had to be reduced to turns just so you could keep up. It’s football on a smaller scale, faster, and it has robots. Importantly, it doesn’t lose the glory of slamming the ball into the endzone and then running around your room, shirt over your head. But you didn’t hear that from me.

You can purchase Frozen Endzone for Windows, Mac, and Linux on its official website or via Steam Early Access.