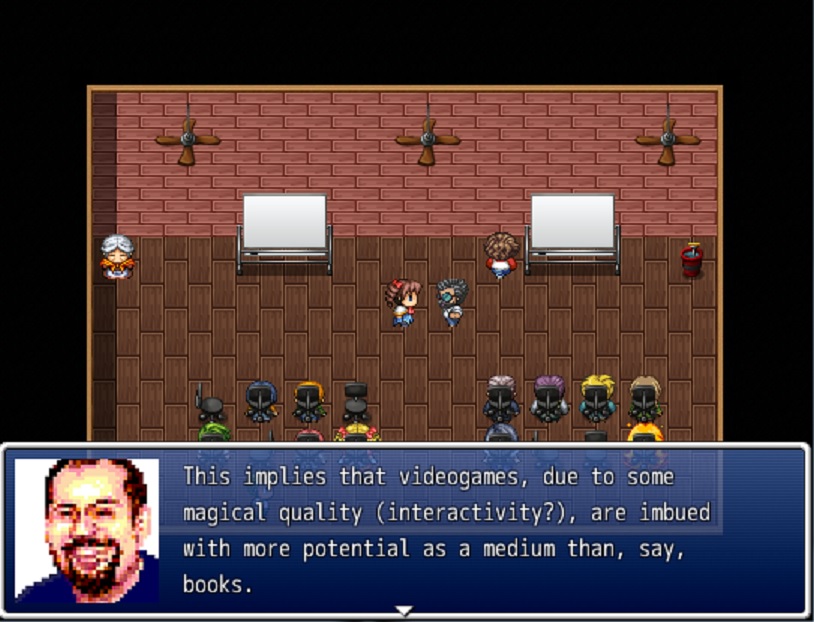 The typical response to finding out what Fuck Videogames: The Videogame is involves either being immediately offended, or mentioning how it doesn’t sound very fun. It’s true, it’s not fun. It’s a talk given by creator of “weird internet stuff” Darius Kazemi at Boston Indies last year, wedged into RPGMaker. It probably shouldn’t be a videogame at all and that’s one of the arguments put forward in the talk. You can read the slideshow version of the talk here.

Honestly, the RPGMaker version of the talk doesn’t really add anything to it other than a layer of demonstrative irony. It’s set inside the room in which Darius gave the talk, so you can interact with the audience members, Darius (to hear the talk), and an old woman who runs an inn there that exists simply because, as she says, “it’s a fucking videogame.”

“Why do some people default to games as their medium of creative expression?”

Focusing on the talk itself, Darius starts by saying that it’s meant specifically for those who struggle to express themselves through videogames. He then puts forward a number of ideas that may seem confrontational, but only in that they are against the grain of progressive attitudes prominent in any tech-based culture, including videogames.

The first point is that using videogames as a medium for expression isn’t always the best option, even if videogames is all you know—in fact, especially if that’s all you know. He’s against the idea that videogames are somehow the great medium of the 21st century and above other forms of expression. I found myself nodding my head along to this while thinking about the number of “personal games” shoved into a generic platformer that I’ve played over the years. In such cases, your story is probably better suited to being written down, illustrated, or maybe just tweeted (that’s a medium after all, as Darius says). Darius makes the point that trying to stick all of your expressive motivation into a video game is limiting yourself.

The majority of the talk superseding that attempts to investigate the answer to the following question: “Why do some people default to games as their medium of creative expression?” It’s a neglected question and one worthy of discussion, hence why Ian Bogost wrote some quick afterthoughts, and Liz Ryerson went more in-depth with her response, both focusing on the topics surrounding this question.

Darius would rather people saw videogames as a creative tool, part of your repertoire, rather than sticking to the only thing you know. Ian demolishes the idea that creating videogames is seen as “noble”, that there’s a greater purpose behind a creative work just because of the medium it’s realized within. Liz goes into greater detail on Darius’s last, fleeting point—that videogames are sometimes made for communities. Darius quotes an email exchange he had with writer and developer Rob Dubbin that epitomizes the argument.

“Buying into the idea that validation can/should/will come from a given culture is way more nourishing to that culture than it is to you.”

Liz adds to this that she worries that people have become so reliant on videogames as a means of expression and communication that they have trouble making choices unless they’re presented to them in a “game-like manner.” They connect with software more than they do people. Liz also makes many more points that are worth reading, particularly about how culture and communities around videogames is self-affirming to the point of being unable to critique itself. She ends with a call for seeing more people not in privileged positions: “who are poor and non-white, who live nowhere near the power centers of this world”. This is intended to not only incite people that fit that description to create, but also expands on an earlier point about the way we talk about videogames, and create culture around them. It’s our responsibility, too.

There are plenty of ideas to muse over and take into consideration in Darius’s talk/videogame and the articles surrounding it. If anything, take away the idea that videogames are just one medium—a potentially great and promising medium—and may not be the best one or necessarily the right one for you.

You can download Fuck Videogames: The Videogame on itch.io.