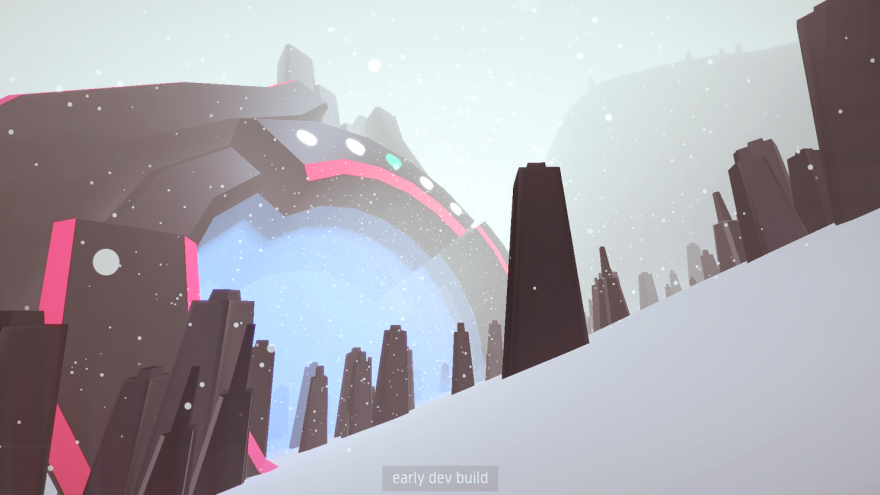 When FRACT OSC (2014) creator Phosfiend Systems’s Richard Flanagan met up with Ben Swinden at the 2015 Toronto Game Jam, they found serendipitous inspiration in their shared love of snowboarding. The two quickly came up with the idea of an infinite, looping mountainscape, full of “branching pathways, hidden areas, and other secrets”—a low-poly love letter to their favorite sport. The prototype that resulted from the jam was rough, and difficult for many players, but they knew they’d hit on something meaningful. For now, they call it Fulcrum.

“Snowboarding has been a big piece of both mine and Richard’s lives. It’s a very special thing,” says Swinden. “For me, [it’s] all about the motion. Moving down the mountain in perfectly smooth, beautiful arcing movements. Improvising with small adjustments and short hops to navigate the terrain. It was a feeling I’ve never gotten a sense of while playing traditional snowboard games, which usually focus on big jumps and how many times you can flip. We’re trying to put the focus on the basics, making the movement feel as good as possible and then building from there.”


As for Flanagan, he tells me snowboarding’s “perhaps the closest thing to a spirituality” he has. “I love riding in the woods, either off-piste or backcountry. Every decision can concatenate into either glorious or unfortunate discoveries. Swerving through trees, punching through branches in the hopes of discovering an opening on the other side—riding powder that maybe no one else ever has is completely transportive. When I’m getting lost in the woods, pushing my mind and reflexes, everything else just melts away and I’m left with these perfect moments between bails and pauses, and it’s beautiful.”

From what we’ve seen so far, Fulcrum promises to deliver an approximation of this experience, though it goes deeper than being merely a snowboarding simulator: It has a narrative, for one, even if the developers at Phosfiend are reluctant to say too much about it at this early stage. And its Tron-inspired environments are self-consciously that of a computer world; their low polygon counts and jagged edges, Flanagan says, serve to lend “an honesty to the medium.”

There’s also a metaphorical, or even introspective, function to the concept. “The repetitive, looping nature of the environments has a connection with re-consolidating broken, repeating memories,” says Swinden. “With time and context, stories and experiences can change.” 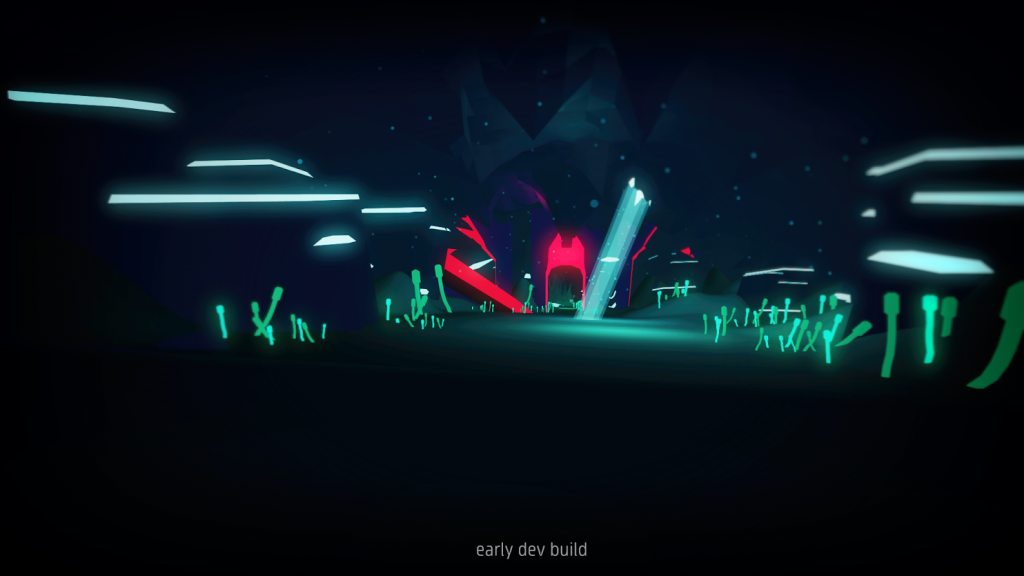 Precisely how the endless slopes will behave is still a matter of debate at this point. Swinden says they’re “looking at designing finite levels that encourage exploration as much as possible.” Once a player finds herself trapped within one looping stretch of terrain, she’ll have to collect floating orbs in order to unlock the next phase of the environment. By using a mix of bold contrasts and color coding, the team hopes to establish a straightforward visual language for these sequences.

Phosfiend has already shown off the project at several games-related events in Montreal at various stages of development, and they’ve been pleased with the response. “We’ve been especially happy with how people from drastically different experience levels can pick up the controller and figure out what’s going on,” says Swinden. “It’s really important to us to have something that can be enjoyed by as many people as possible. That being said, there’s still a huge skill component, and it will be really rewarding for those who want to master it.”

Fulcrum’s still “very early” in development, so we’ll have to wait a while longer to hit the slopes, but we can enjoy plenty of gorgeous screenshots in the meantime.