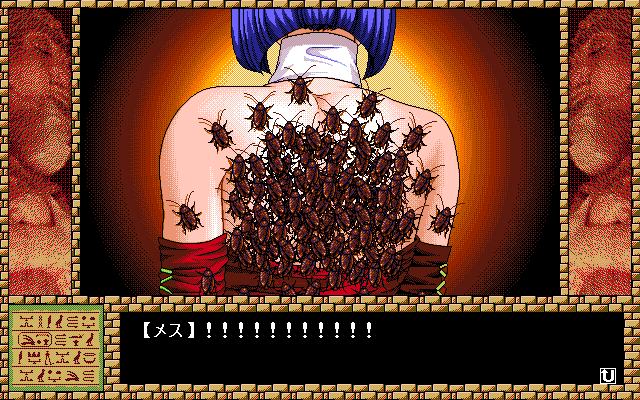 Recently, Jon Rafman had a show at Zach Feuer Gallery. Chelsea art galleries typically display and sell art that is easy for a deep-pocketed buyer to digest. Paintings that remind you of Basquiat, sculptures that remind you of Koons, exorbitant empty provocative shit that is easy to hang on the wall. Rafman’s best known work cannot be hung on a wall. He is best known for touring Second Life fetish communities as a Kool-Aid man avatar, so it is not surprising that this latest show, “You are Standing in an Open Field,” follows suit. The show begins with racks of fake game cases and ends with Codes of Honor playing on loop in a life-size petrified model of what I’m guessing is supposed to be a gamer’s bedroom. In between are erotic Japanese body pillows, adorned alienware laptops, and relief sculptures depicting inventories of masks and weapons. It’s all here, all the relics of nerd culture you wanted to see in a Chelsea gallery but were instead stuck looking at Art. Codes of Honor is one of three video pieces, the most controversial of which is his collaboration with Oneohtrix Point Never, Still Life (Betamale), which was removed by both YouTube and Vimeo multiple times for explicit content.

That screen in the installation was the 2nd or 3rd time I encountered Betamale, but it was the first time I felt serious deja vu. Maybe it was the seductive, dead-eyed daikmakura gaze and other environmental elements recalling internet subculture that caused everything to suddenly feel familiar. I convinced myself I had encountered all this before, shuffling through the various scenarios where I might have stumbled upon it. I tried to placing everything I saw within a context of where I would have seen it before: I must’ve seen those furry videos on YouTube, I could have sworn I saw one of that disgusting gaming set-ups on livejournal (somewhere), some of the more disgusting porn must’ve come from 4chan. Even the music was familiar. I’ve heard this song, in some other context.

Wrong. Turns out, no, I haven’t— I hadn’t seen any of it, especially not the manga-esque pixel art that glared at me with the most familiarity. In the back of my mind, I knew the art style was from a type of videogame. But figuring out exactly which one ended up taking me through seedy Internet back-alleys I never would’ve expected.

After going to the Rafman show, I hit Google to figure out what I knew that artwork from. It wasn’t traditional, goal-oriented diligent research. It was the result of keystroke hypnosis, self-automated clicking through cyberspace. A link leads to another link, leads to another link, and keeps going forever. I read someone referring to this as an Internet k-hole— a k-hole, of course, being when you’re on so much ketamine you disassociate from your body. An internet k-hole is when you spend hours clicking through a wiki, or when you start with an article your friend posted on Twitter and then end up looking at pages and pages of the Tumblr tag for #kawaiinails. Forgive me if I’m not crediting whoever coined that properly; I was in the depths of an Internet k-hole when I encountered the concept (and googling it only leads to information about a blog with random vintage polaroids; the blog itself is a k-hole).

I wonder how much of my interests come from these dissociative online exhibitions. I collect information and images, my understanding of which shatters into fragments underneath the weight of all the other cultural pieces. Then an outside stimulus recalls memories associated with something I kinda know from the internet. So the furries in Betamale remind me of Furcadia, which reminds me of an episode of CSI, which reminds me of yiffing, and so on. Encounter, detach from meaning, reencounter, re-access, re-bury. Repeat. Somewhere in another k-hole I found fmtownsmarty, and fully realized how little I actually knew about the game art in Betamale.

FM Towns Marty isn’t a person, it’s a defunct Japanese PC-console hybrid from the early 90s. Kill the spaces and you get fmtownsmarty, a Tumblr run by a guy who isn’t a gallery-affiliated artist like Rafman—just a passionate, patient guy who who plays videogames. Passionate and patient because the videogames he plays aren’t really like anything we play now. There are a bunch of Japanese games from the 80s and 90s that you can’t just rely on your old Gameboy or backward compatibility to play. They fall under that inconvenient category of games that require an emulator, but it isn’t even that easy since most of these games were never translated into English. All of which amounts to taking a lot of fucking patience if you’re a non-Japanese speaking fan, which the owner of fmtownsmarty, who I will refer to from now on as Marty, is. What does this have to do with Rafman, and Betamale? 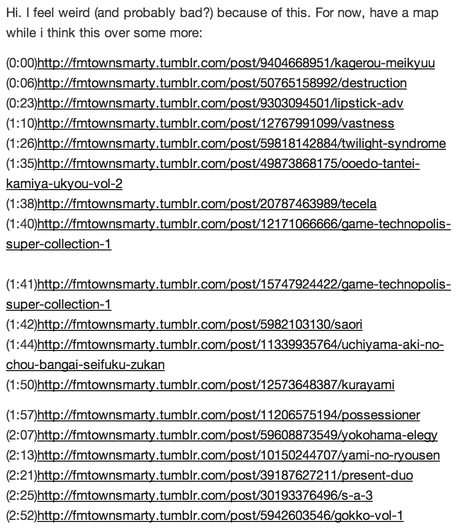 Those are links to posts and corresponding locations in Betamale where the content appeared, amounting to a decent handful of images. Marty and his fans were upset about this, and understandably so. “I don’t run this blog under any pretenses.” Marty writes in another post,“I’ve been doing what I’ve been doing up to this point electively, because I’m interested in exploring this particular branch of video games. I try to do my best to represent these games, relative to my personal experiences playing/recording/gif’ing/arranging them as honestly as possible.”

Marty’s blog is comprised of gifs and screenshots from a weird era in gaming history that would be lost if it wasn’t for dedicated fans like him. Before Windows became the universal standard, there were countless machines and operating systems competing for dominance. In Japan, rendering the characters of the three types of written Japanese yielded machines with wildly varying attributes; and in the early 80s, the demands of an extensive written language produced machines with high resolutions but slow processors. Some of these appealed to business, but other, more niche systems gained popularity among computer hobbyists, who would program the machines themselves. This subculture of programmers, using machines such as the NEC PC-9801 or Fujitsu FM Towns, gave birth to a vast underground game-making community— sorta similar to the indie game scene today, minus Twitter, Kickstarter, and Greenlight. The community was only aware of each other through magazine publication and game making contests. Many of these early developers continued making games with notable studios such as Square Enix and Falcom.  The computers were too slow for, say, Wolfenstein 3D-style shooters, so the bulk of these games are visual novels or text adventures. Unlike Twine, these text adventures were accompanied by exquisitely detailed graphics, due to the uncharacteristically high screen resolution, examples of which appear on fmtownsmarty and in Betamale.

The absurdity of English text defines some screenshots, but in others the breathtaking pixels redeem any lack of understanding.

The images in Marty’s collection vary from hilarious to beautiful to bizarre, which is representative of the lack of censorship and unified style in the original games. Some of these games revolve around ridiculous pornographic plots. A chunk of the blog is NSFW images of women that make me cringe, but they are not out of place within the history of bizarre erotica in Japanese art. Any random English text amongst Japanese characters won’t help you understand the plot any better, if you want to know what’s going on in a screenshot, get ready to do some frustrating research which, surprise, leads into more k-holes. The absurdity of English text defines some screenshots, but in others the breathtaking pixels redeem any lack of understanding.  None of this history, of course, is discernible from the images on fmtownsmarty alone. (Marty links to some solid explanatory resources, including this article, the author of which recently Kickstarted a book to provide a comprehensive history of Japanese game developers in English.) Conserving the memory of these games that originated on dead hardware is important, but it’s not easy, even with emulators. It would make sense that Marty was upset.

He confronted Rafman, who eventually credited fmtownsmarty along with the other sources of images in Betamale. Unsurprisingly, this set of links lead into yet another internet k-hole I exited thinking, “God, I wish I had never seen that.” (Do yourself a favor and don’t hangout on gurochan for too long.) That original deja vu kept nagging at me, so I went through the archive of my own Tumblr. I reblogged an fmtownsmarty image 2 years ago, and in the 5 years and 4,000 likes of my personal tumblr, who knows how many fmtownsmarty images I mindlessly liked, automatically contributing to the notes number without ever understanding what I was seeing, absorbing it just enough to make the style distantly familiar. Tumblr, that ever-growing pile of cultural fodder, makes encountering rare Japanese games formerly accessible exclusively on archaic devices commonplace. This would be impossible without the Internet, or even 10 years ago online, in the days pre-Tumblr. Marty’s screenshots and gifs can be found on blogs alongside manga, 8bit nostalgia, #kawaiinails, tags and topics somewhat related but which really aren’t the same thing at all. And in the case of fmtownsmarty’s images, what is lost in the midst of us making our own connections is a whole history. We create our own context for the images we encounter online, especially if the mode of initial encounter is in a context-less scrolling mass like Tumblr. The Internet isn’t only about connecting with people. It’s about making sense of an impossible amount of data available all at once.

The Internet isn’t only about connecting with people. It’s about making sense of an impossible amount of data available all at once.

In Betamale, a cool female voice narrates the stream of images: “You can’t find your way out of the maze you are convinced has been solely created for you.” Betamale is an Internet k-hole, the kind that doesn’t end when you shut your computer and go to bed. “If the content I’ve posted on this has inspired any artists/game designers/writers/people who play videogames/people interested in the history of videogames/etc/etc/etc, well that’s the best thing I could hope to achieve here,” Marty writes. Momentary aesthetic familiarity might be better than no familiarity at all. Rafman putting the images alongside furry porn and manga is what we’re doing in our minds already. Putting two unrelated concepts together says a lot about the spaces in-between. A friendly Urban Dictionary user, “Ikewis,” contributed an interesting definition of a k-hole:“Only noobs think that k holing is overdosing on ketamine when in actual fact, people with experience know that its the best bit.”

This reminds me of two other things: a quote I bump into online a lot: “I miss my pre-internet brain,” and also the many times my father asked what was so interesting in the computer screen. Only noobs think these things; people with experience know that getting lost is the best bit. 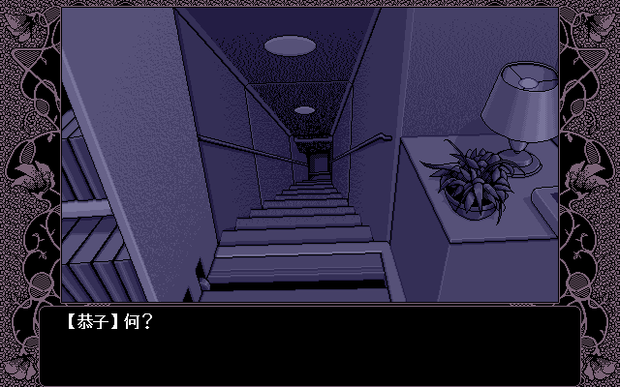