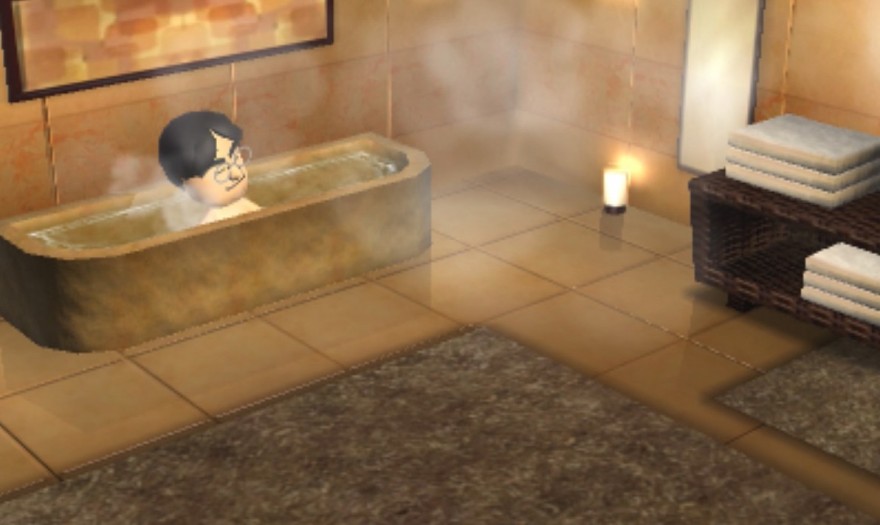 It’s reductive to criticize or discuss works of fiction in terms of other works of fiction, but Tomodachi Life is the headiest kids’ game that will perhaps ever exist, our time on this planet is short, so let’s just take the shortcut: this is Animal Crossing meets The Sims, with boiling bubbles of Seaman just under the surface trying to escape. Then again, the game asks, “What happens when friends, family members, and celebrities become Mii characters with their own personalities and live on an island where almost anything can happen?” Its answer is a shorthand. It holds a mirror back up to its player and says: this is your meaningless existence, and you will never ever win.

The most vibrant futility simulator this side of the Mississippi.

It’s entirely possible I am projecting onto Tomodachi Life. Where others will see bobble-headed Miis and welcome Christina Aguilera into their island’s apartment building willy-nilly, I see the most vibrant futility simulator this side of the Mississippi. The above quote comes from the game’s press release, and the “anything” that can happen is predetermined, of course, by whatever Nintendo has programmed into it to allow your residents to do.

This is not an original criticism to make, and would feel unfair to levy elsewhere, but Tomodachi Life seems to be intentionally wagging this in your face: Your characters are literally stuck on an island, only have a handful of activities (go to the café, visit an amusement park, check out the concert hall, etc.), and the big twist is that they don’t really need you to do any of them.

So what, then, is the player’s role in all of this? You are a glorified godlike babysitter, needed only when your Miis are having life crises ranging from hunger and needing to sneeze all the way up to wanting to ask someone else out for a date or advice on how to patch up fights with other residents. You never learn what the fights are about; you are just counted on for menial tasks and to keep each characters’ happiness meter from dipping to become a dreadful blue sadness meter.

It’s a world of transactional relationships, whose only respites are adjourning to buy miscellaneous necessities like hats or groceries.

This, Tomodachi Life says, is your life.

But the transactions go both ways. In impressively rendered Dr. Sbaitso–circa-1992-quality voice acting, your residents will tell you over and over again, “Here. I want you to have this.”

Herein lies the game’s thesis. Your residents tell you this after you do something for them. They give you something after you did something for them. In addition to money, the items they give you are the game’s other form of currency. These are only to be used to give to someone else. Sometimes there are little nods to the game fucking with you. For example, as thanks for you playing and then losing a game of Concentration, you’ll be given a box of Kleenex. To cry into because you lost? Or to cry because you realize many of our relationships in life are no deeper than these exchanges?

Someone pings you, you come to their rescue, and they give you a trinket as thanks. Perhaps it’s a meal at your favorite Indian place. What they needed help with doesn’t matter—it could be a break-up or a celebration dinner.

Tomodachi Life is weird. It is a world where you earn money by doing things that makes other people happy, only to spend that money to make them happier. But the only thing Tomodachi Life values above money and gifts are relationships—evidenced by the sheer amount of cash you’ll earn when you do things that aid friendship, marriage, or ending disputes between Miis.

By way of proof, consider the following figures:

But even within this cosmos, there is very little value placed on your actual relationship with the Miis. In an added wrinkle to any reading of the game, you also exist in the game’s world: I am referred to by my residents as “David’s look-alike.” They think I am a copy of my avatar. From time to time, they ask about me, but not with much depth. One of the creepiest exchanges I had went like this:

“Have you done anything interesting lately?”

“You must live such an interesting life.”

Finster (a female avatar I created with a ponytail and a Cro-Magnon brow) gave me $6 and set me back on my way. And, again, here’s futility: I could only tell Finster one of three or four pre-selected responses. Nobody ever is really all that interested in anybody else’s business; we’re all just waiting our turn in conversation to say our piece and go about our lives.

By using technology to emulate humanity, it reminds me of Seaman, which also commented on how increasingly mechanical we are becoming as humans. We may extol individuality, but the game paints a grim reality, in which we’re all pretty much the same. We have our three or four things we like to do, and we really just want someone to listen to us gripe about our problems and drama. The drama in Tomodachi Life is never all that high-stakes, and that also seems to suggest that none of our problems on this world—if you can afford a Nintendo handheld and a videogame—are really all that bad.

To bolster this claim, here’s an argument that broke out between my avatar and Thumbnal (a female resident I created whose face looked like a thumb). Imagine the following scenario as the two participants are flinging rubber duckies, stethoscopes, faucets, coals, and necklaces at each other:

“Says the person who lied.”

“What does that even mean?”

“You’re so funny clowns look at you when they want to laugh.”

“I hope you enjoy cleaning up this mess later.”

This seems silly to us, but David (not me) was devastated. He moped in his apartment with a storm cloud over his head for a solid afternoon. He was inconsolable. I encouraged him to try to fix things, but Thumbnal was still pissed. David sighed to me: “We didn’t patch things up. At. All.”

Tomodachi Life shines when it leans less on you for the day-to-day necessities like food, and more on these quirky short narratives that occur. Even these, of course, are scripted and predictable, but that they’re played for maximum drama and pathos is the game’s strongest point and most cutting satire on our drama-craving nature.

I love the paradoxical silliness when Flap got a strange note telling him to meet someone on the roof. He climbed the stairs and found Finster, wearing a fake mustache, warning him never to talk to strangers. Flap shrugged and back at his apartment he asked me whether he got anything out of that experience. If he had: he learned from a stranger never to talk to strangers. What does that mean?

He learned from a stranger never to talk to strangers.

It means that although Tomodachi Life is about futility, it’s also about perseverance. There’s not much we can do to escape our life-long quest for food, companionship, and occasional breaks other than to keep on moving. Take, for example, Finster’s lackluster love life. She confided in me that she thinks she has feelings for Roops (an Indian dude wearing an ice-cream dollop as a hat). I encouraged her to go for it. She meets him on the beach and asks, “I think we are meant to be together. You should be my boyfriend. What do you think?”

Roops stares for a moment (never a good sign in this type of situation), and with a booming echo says simply, “I’m sorry.”

In comes Finster’s sadness bar. She mopes and mopes and mopes. I give her a camera as a gift to distract her from her malaise. She takes a picture of a squirrel (she named the composition “Unsmiling Mother” and later does another of some bamboo chutes called “Loyalty”). Then the day comes where she is convinced she loves Slowtrain. After assuring her what she’s wearing is fine (I had no other outfits nor money to afford buying another one at that time after splurging on a robot suit for Fred Savage Jr.), she meets him at a coffee shop and says, “So. I think we should be boyfriend and girlfriend.” Slowtrain is an Eeyore of a guy (based off a real friend who likely will be reading this, so you know who you are), and he slowly looks at her, shrugs, and says, “Sure.” Finster’s assertion of that moment: “It went like a dream!”

Tomodachi Life is a bizarre game. It’s a tiny world with its own news channel (a popular story involved Roops opening his window and a bird flying in; another was the surge of headphone purchases around the island), its own residents with predictable dreams (they all sing in the concert hall with pre-generated songs lacking depth about love and pizza), and if you’re open to it, its own comment. Playing Tomodachi Life is no different than life in its purest sense, but it makes one wonder: who’s playing you? Should we care?