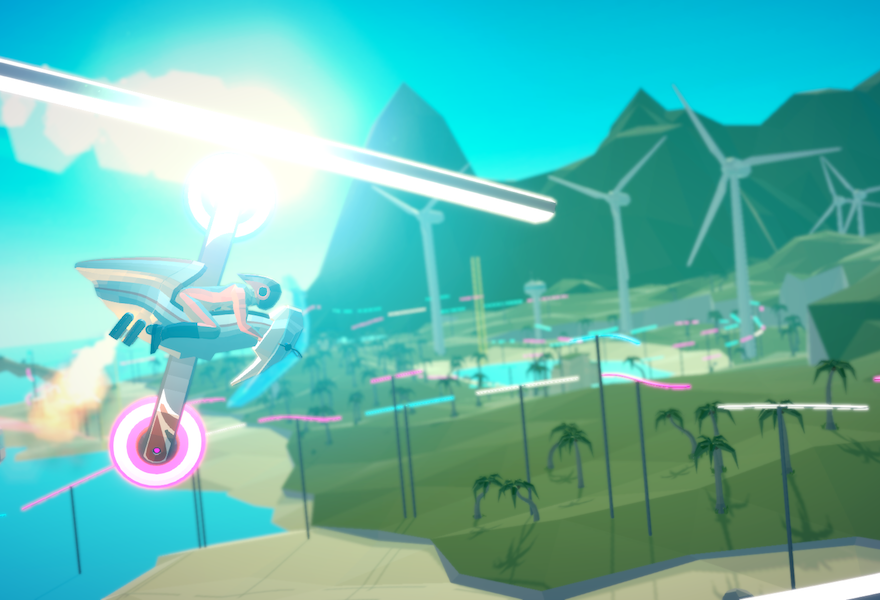 Following in the footsteps of last year’s rocket-car soccer game Rocket League, FutureGrind is set to be the next entry in over-the-top sports games that are built around being as dope as possible. With its bright neon colors, rad beats, and sick flips, FutureGrind imagines a future where the trappings of the EDM club have merged with motocross to become a national pastime. It’s a time and place where riders perform dangerous and sometimes lethal stunts to the bewilderment of thousands watching at home.

You could conceive FutureGrind as a sort of evolution of the stunt-biking series Trials, in which players have to navigate off-the-wall motocross courses while trying to pull off as many tricks as possible. In FutureGrind, you use a specially-designed “motorcycle” to ride along massive and increasingly ridiculous grind rails that are sort of like what might happen if Six Flags met your local skate park. The rails themselves come in both blue and purple, as do the bike’s wheels (all neon, of course), and players are tasked with pulling off a series of wheelies. The catch, of course, is that the bike’s wheels are only allowed to touch rails matching their own color, or else it’ll explode and the rider will face a nasty splat on the ground below. The result is a series of flips, spins, and jumps from rail to rail, it somewhat being reminiscent of the scene in Minority Report (2002) where Tom Cruise jumps from automated car to automated car along almost impossible geometry.

Over on the game’s devlog, the creators have gone into a bit more detail about how this all came to be, walking viewers through their creative process and explaining the code and tools they used to make the game. It’s all very technical, but it gives us a bit of a peek into the hilarity that sometimes occurs behind-the-scenes while developing a game.

Particularly amusing is a Vine of the creators testing the physics of their rider character, making them dance to Cœur de pirate’s pop song “Carry On.” And then there’s one where the rider falls out of their seat and begins spinning around the handlebars like a pinwheel. Not to mention the one where the rider spontaneously develops Mr. Fantastic powers and starts stretching their limbs everywhere. But my favorite may be the one with the planking.

By all accounts, FutureGrind seems to have a good sense of humor about it that makes for a surprisingly strong combination with its bloodsport setting. It’s got the clean-cut and color-coded world of Mirror’s Edge (2008), the rave culture flair of Daft Punk, and the setup of Hunger Games, but it seems to have combined all of these disparate elements to form a cohesive whole entirely its own, the focus of which is maximum cool. So the riders die sometimes. They knew the risks going in. It’s all worth it in the name of a spectacle this rad.

FutureGrind is currently set to launch on PC and Playstation 4 in mid-2016. Follow the game’s progress over on its devlog.