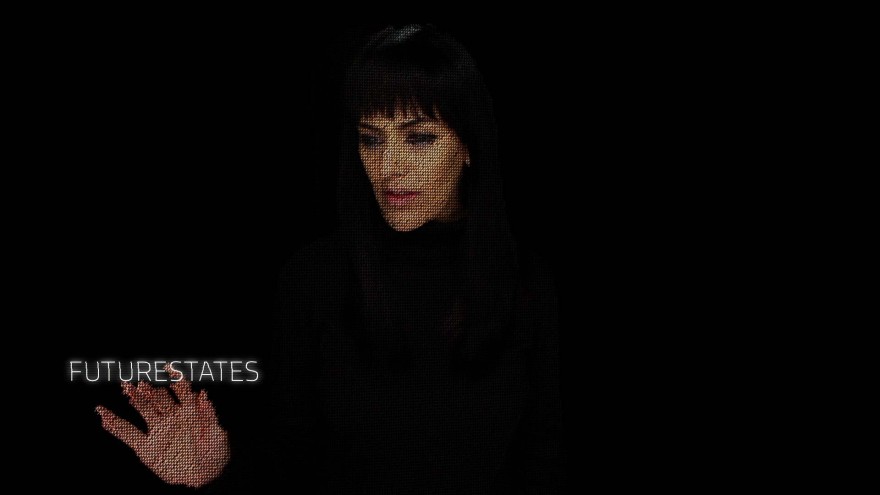 “The future is in our hands. We can build it better. We can be better.” Last Diary Entry of Dr. Evelyn Malik, October 5th, 2023.

A new wave of science fiction, perhaps influenced by Her or developments in the tech world like A.I. that might be able to emulate biological learning, is depicting a future that isn’t so much about the doom and gloom of technological singularity. In fact, the newest vision of our future paints a picture of singularity that is much closer to a rocky marriage between both man and technology, rather than a race for one to surpass the other.

“The natural tendency with sci-fi is to take it to this very dystopian place, where you’re presenting a world that is worse than where we are now,” says Karim Ahmad, series producer of the ITVS web series Futurestates. “That was a fine line we tried to walk with this series. We want to express to people in the present that there is gravity around these social issues and that things could get worse, while avoiding dystopia.” Futurestates, which launched it’s fifth and final season in May with seven short films imagining a United States of the near future, ultimately sought “a way to talk about the future with more positive energy. Which is why we built a world where the tone in each film and through the events of the world, gives a sense that there’s something we’ve lost. But now, that it’s actually trying to rebuild itself.”

Futurestates released its final season with a bang, revamping both its narrative and content delivery platform. Unlike past seasons, the seven short films (all directed by different independent film makers) build from a single storyworld, each connecting back to a single, overarching narrative. “The idea was that bad things had happened in this world, due to an increasing reliance on automation,” explains Karim. So the films each center around a scenario “looking at technology as a way to augment ourselves and open a door to explore what really makes us human. Its the idea that technology actually does have the opportunity to open the door to a better world. But it’s not a guarantee. And that we, as individual humans, have to have the courage, perspective, and priorities around what we want out of society in order to bring about a better world. It’s up to that partnership between humanity and technology to sort of hold up that opportunity.”

The new user experience, designed by New York based digital studio Murmur, sought to embody that central partnership, by quite literally melding the storyworld’s digital landscape with the main character. Upon first entering the Futurestates website, for example, an abyss of staticky datapoints form into the shape of a woman. After a moment, her urging expression disseminates back into a landscape of digital noise, before revealing a message dated October 2035, signed by a Dr. Evelyn Malik. “I’ve figured it out. I can open the door,” the enegmatic message reads, “but they have to walk through it. They’ll have to seek. Watch. Fractured bits of memories. Stories from my time. And my story… Cammie’s story.”

After clicking past Dr. Evelyn’s message, a map of networked story fragments materializes, allowing the user to nonlinearly explore interconnected artifacts, news segments, video chats, and short films that flesh out this world of 2035. As Murmur designer Mike Knowlton explains, the idea behind the format was to make “the user experience part of the storytelling,” by creating a website that embodied the themes by “playing with both the human form and the digital form.”

The more you dig through the story, the more you uncover about the mysterious disappearance of a brilliant scientist who changed the future irrevocably by inventing a responsive technology called “sensularity.” Through these revelations, the network of branching story nodes you’ve been clicking through suddenly takes on new meaning. You realize that Dr. Evelyn Malik’s “sensularity” technology allowed her to give up her life as a human being in order to literally become the computer, so she could reach back in time with a message to the people of the past (our present): you can change the future. In fact, you shape the future every day.

According to Karim, Futurestates originally focused on “looking at the different social issues we might face in the future, through separate storyworlds,” as a way to further ITVS’s mission of “telling socially urgent and relevant stories, particularly for and about under represented communities, while reaching a broader audience.” However now, in its new iteration, both the narrative and the interface are “very much about getting people to think about how we’re involved in creating our own future. To really think about these different scenarios posited by our film makers, which say that this is a possible future. Whether it’s more grounded and realistic, or off the wall and totally fantastical—it is a possible future that you have a role in bringing about or changing.”

And while Futurestates as a web series has come to an end, both Mike and Karim hope to continue that discourse by putting on a series of interactive live events which combine social media involvement with the traditional film screening. I happened to catch their first attempt this past week at the Convergence portion of the New York Film Festival, and while audience participation was tepid at best, there seemed room enough for the event to really take shape as a conversation starter.

The presentation began with a preface video, interlacing scenes from Futurestates with related videos about today’s craziest real life technologies. Each of the seven short films was then distilled into a thematic hashtag, like #fscompassion or #fslove. The audience then tweeted their thoughts on each subject to Dr. Evelyn Malik’s twitter account, which obviously lead to some witty back and forths—all of which were projected onto the big screen at the front of the theater. Finally, the three most popular hashtags determined the three short films that were screened, with my audience choosing #fslove, #fsredemption, and #fsfear. No matter which films the audience chooses, however, each performance will end with a final video message from the digitized Dr. Evelyn, urging everyone to “change all the rules” in the shaping of their future.

Each film, whether experienced through the live event screening or on the new platform, presents a beautifully tactile world. A world so organic and natural that it seems eerily recognizable.

You can keep up with ITVS or learn more about any upcoming live events through their blog here.