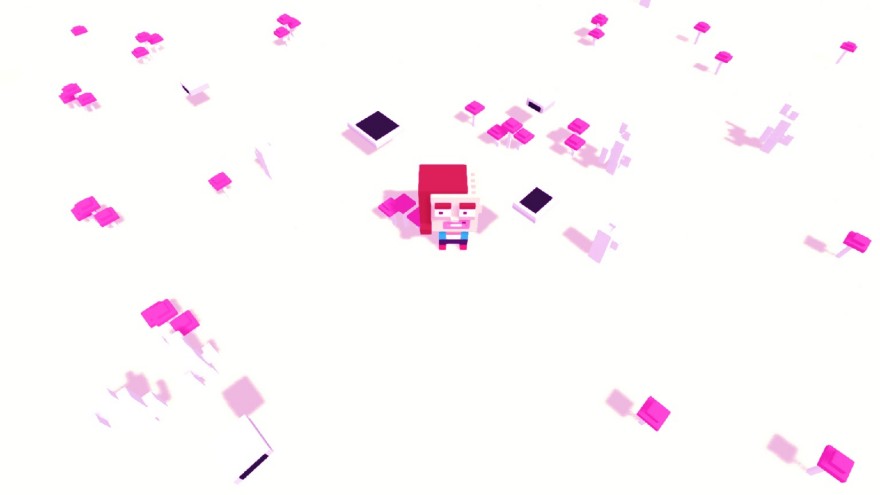 Ah well, you’re going to die on the last tufts of a flooded planet while military robots exile humanity to an arid wasteland; at least you’ll have a killer soundtrack playing you out. Maybe it will be the death-obsessed organ-backed strums of The Doors’s “The End,” or the more comforting angelic bliss of Sigur Rós’s “Njósnavélin.”

Hell, why settle on just one momentous track when you can have a whole half-hour album of chattering soundscapes and cheery synthwave to see you off to the other side? That’s what FUTUREVOXIMAGINARIUMDOTEXE suggests as it appears on the scene, striking a futurist pose with a body made of bright and bold voxels.

the audiovisuals blend seems extracted from our most pleasant dreams

Its creators call it a “wandering simulation,” but it’s better understood away from any appropriate videogame lexicon, moving it closer to the realm of concept album—the kind that Pink Floyd would string together. It tells a story through big synth hits, whirling sci-fi beams, delicate sea-washed piano tunes, and fidgeting metallic horror sounds. Rather than lyrics, it uses game environments to reveal its plot points. The voxel landscapes borrow the camouflage techniques of a chameleon in order to change its setting, inhabitants, and décor to compliment the tone of the music.

You awaken on the rancid shores of a post-global warming age, where only meagre islands elevate the living above the rising waters that consumed the dead. As you wander the flatlands you can kick metal junk and empty glass bottles into the green rivers. Your actions here aren’t purposeful, they belong to aimless strolls that pass the time, or as the game’s creators put it, “the ennui of penultimate existence.”

As the first track ends, day turns to night, and soon you’re dreaming of iPads and pink roses in a white-washed wonderland. This is where that gentle piano comes in and, boy, the way the audiovisuals blend seems extracted from our most pleasant dreams, only voxelized. Of course, it doesn’t last, when the punkish half-shaved headed character rouses we’re surrounded by security turrets, and miserable faces gathered around the last orange flames of a barrel fire. Doom is in the air, in the red screen filter, dancing overhead in choppy drum hits and squelching robot noise.

It all spirals downward from here, apart from the joyous piggyback ride on a four-legged robot. You end up among rats, perhaps in a sewer, maybe in a spaceship, and the ending goes full-on industrial sci-fi. Two mega-computers argue about, err, something in distorted voices before one urgently tells you to throw yourself into a pod to escape. It’s unexpected, as it’s the only part that doesn’t synch with any music, abandoning the effort to send you out in a hazed panic.

That’s closer to what the actual end will probably be like. We’re fond of picturing ourselves dying in epic movie scenes, hands stretched to the sky, strings wailing with the upset of our death. But deep down we all know we’ll be too consumed by terror to die with any grace or heroism worthy of a musical finish.