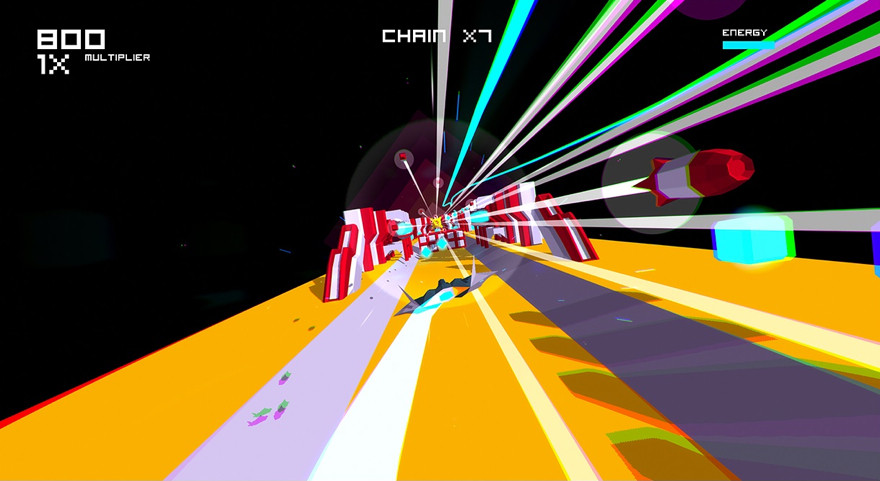 The word “cube” holds about as much meaning to the average person as “polygon” or “pixel.” Alone, they’re just manipulations of space and shape, but bring them together, and they can become anything—a monster, a hero, a world.

Until I played Futuridium EP (Extended Play) Deluxe, the new PlayStation Vita retro shooter from Turin, Italy-based developer MixedBag, I had forgotten my old psychological trauma with cubes. It sounds ridiculous, but when innocuous three-dimensional objects become enormous death animals that seek to crush you, they transform into the seeds of nightmare.

That I recently read Stephen King’s novel The Shining (the Kubrick film is one of my favorites) and am currently watching the eponymous TV miniseries may have some bearing on my feelings. In them, the ordinary and inanimate become demonic manifestations of fear—cutesy hedge animals that stalk you in the grass, inching closer every time you look away and back again, or fire extinguishers that grow teeth.

For me, the cause is one I doubt anyone thinks about anymore: a game called I.Q.: Intelligent Qube for the PlayStation. I never owned the puzzle game—only had the displeasure of playing a sample of it on a PlayStation demo disc that came with the console. The cubes didn’t give me nightmares, but I can still hear the slamming, echoing sound they made as they fell from higher platforms, chasing me ever faster until they or I fell off the edge into the dark black abyss.

Geometry out of context can be a frightening thing.

It was an empty, void-like space, which is where Futuridium takes place, with all its psychedelic neon colors and its affinity for cubes (and bits of cubes). And while the simple 3D graphics look primitive, the contemporary electronic music, silky smooth frame-rate, and nimble spaceship remind me that I’m not playing a ’90s or even an ’80s game—even if it’s based on Andrew Braybrook’s old 8-bit shoot-em-up Uridium, which released for the Commodore 64 in 1986.

Both games are a sort of space war: You fly over dreadnoughts, avoiding shots to your ship. (Dreadnoughts were early 20th-century battleships.) In Futuridium, you fly over their surfaces, dabbled with turrets that shoot missiles, some lazy and some so deadly and precise that only by boosting can you escape them. Other times, you’ll need to avoid mines that explode like stars of expanding red fire or giant, spawning purple orbs that threaten to envelope you in their mass. Long, white rectangles like poles spin against zero gravity, and colossal cubes break apart and crash back together again. It’s tame by Kubrick’s 2001: A Space Odyssey’s standards, but geometry out of context can be a frightening thing.

Running into them doesn’t count, mind. You have to shoot them to get more power, and when you get them all, then you have to destroy the core, which can be hidden or concealed. To survive, you have a flexible tool at your disposal: a ship that isn’t bound to the vertical or the horizontal but to all directions. You can turn your ship around and go back the way you came. You can hold down the turbo for as long as you like.

There’s no easy mode—Futuridium expects you to learn and to master, and you will, but the only mercy it shows you is the credits you can earn through how many cubes you’ve destroyed. With these, you can “continue” to prolong a game over, just like in the arcades. I was up to eight or nine by the time I hit the final zone.

And this is where the frustration sets in—the hatred of cubes. Is it worth replaying challenges you’ve already overcome until you beat so many at once, some arbitrary quota? Was I learning more by doing so, becoming a master of skill? Did I conquer, or was I conquered, playing enough to unlock the additional credits I needed to make it through alive?