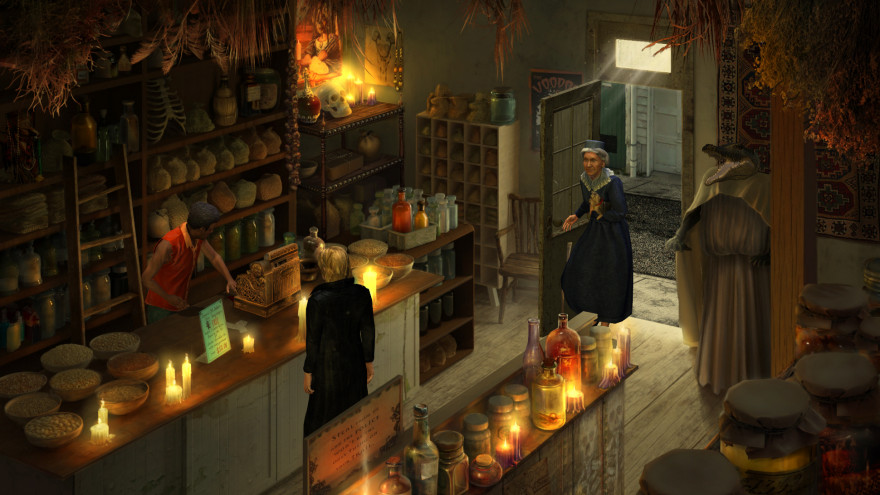 When I was about 10, the mall’s bookstore closed down and nothing opened in its place. If I wanted books, I had to wait until the mall’s bi-monthly book fair, so I never got what was new or interesting, just what nobody else wanted. In those stacks of self-help prescriptions and new age bibles there was another paper pulp refugee: I found the novelization of Gabriel Knight: Sins of the Fathers.

The game is a classic with a certain crowd. It’s a dark, moody point-and-click adventure game about a charming writer researching a string of recent voodoo murders for his book. Gabriel researches the occult history of New Orleans, and starts to uncover a conspiracy while simultaneously learning about his own family’s history with the occult. Of course, there’s also a love story. It’s a nice bit of gothic pulp with a dash of Dan Brown in a genre that mostly stuck to comedy or grab bags of bargain-basement fantasy tropes. The novelization I encountered was written by the series’ creator, Jane Jensen, and it was a faithful adaptation—maybe too faithful. Every single puzzle was described on the page, every bit of research and exposition gleamed from the game’s many one-dimensional information-spouting characters. It read like a transcript of a YouTube speed run through the game. Let’s Play Gabriel Knight: The Novelization. I stopped 30 pages in.

The game is a classic with a certain crowd.

But if I’m honest, as much as I liked the game it was based on, the game itself had the opposite problem. I replayed it a few years ago, and most of the solutions had faded with time. Solving puzzles was a mix between memory and epiphany. But I did get stuck sometimes. I went back to the same people, clicked on Voodoo and Cabrit Sans Cors in conversation windows hoping to gain new insight, and instead getting the same stock replies. I scoured each pixel tableau—literal pixel hunting—in the hopes of finding a new clue. Locations were visited and revisited.

The game’s occasional opaqueness meant that I got to wallow in its moody version of New Orleans for awhile. But then I would give up and look at a FAQ and either smack my head because the puzzle was obvious, or swear at my netbook because it wasn’t. These are grievances that come with the point and click genre, but they’re made all the worse because the game’s greatest success is its careful, suspenseful mood. The second I got to the point of opening up Google, the tension drained.

Gabriel Knight is a game best thought of in the past tense. It works the second the game is finished and becomes a highlight reel. The pulp plot briskness, with the seared-in mood acquired from wandering in circles. The moment-to-moment frustrations fade. That’s why playing the 20th Anniversary remake of Gabriel Knight broke that spell again. Some problems with the game are fixed. Conversations have highlighted topics so the player knows what’s relevant to ask, instead of wading through a pile of “I don’t know”s. The game’s locations open up to the player gradually, instead of being introduced when they have no immediate relevance. And, of course, there’s a hint system. But these come with new and old problems: Its new high-res plastic fantastic 3D, with its beautiful backgrounds, still had me missing tiny clues that were near invisible in the detail-rich rooms. The voice acting has been redone, which means no more Tim Curry vamping as Gabriel. The broken character models clip into walls and turn like shopping carts missing a wheel. There were sound glitches that make the characters talk over one another.

Sins carried over from the original.

In those many years since I first played it, I’ve changed, too, and noticed problems that somehow eluded a 15-year-old boy who thought buying videogame novelizations was a good idea. The love story, between Gabriel and wealthy socialite Malia, feels weaker. Malia falls in love with Gabriel because he’s the hero—why wouldn’t she? Every black character, of which there are many, is either an asshole or secretly evil. The game’s strong New Orleans setting is abandoned towards the end, just as the game’s plot starts to go all Dan Brown. These problems are still in the remake, sins carried over from the original.

Included in the game is a bunch of behind the scenes tidbits, and interviews with key team members, like Jane Jensen, about the original game and how it was made. Revisiting Gabriel Knight: Sins of the Fathers didn’t feel that necessary for me, but these bits did. They’re a shrine to the game, and what is now a different way of making games. I roll my eyes whenever Criterion re-releases a film with yet another round of featurettes, but it’s something so seldom seen with videogames. It feels necessary, more than replaying the game itself. It’s both love letter and time capsule, for fans and for the newly curious. In a few years, when it’s faded almost completely from memory again, I look forward, not to playing it, but to finishing it, and remembering it fondly yet again.