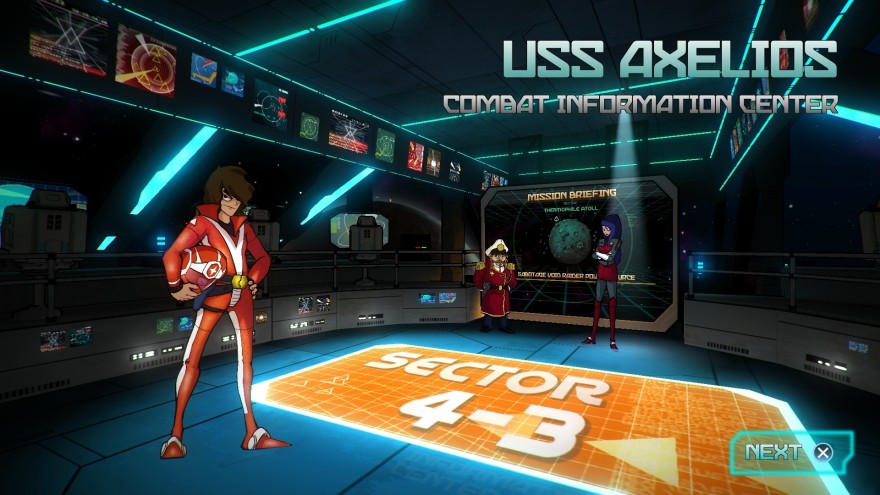 There’s something really disingenuous about people and corporations packing up our best memories of the “good ol’ days” and selling them back to us. It’s a very Don Draper way of selling something we’ve essentially already bought. But sometimes a game, book, or show, can take us back to a good place in a way that’s full of heart. A place where you get to fly around in a spaceship and blow up space aliens and space bugs and transform into a giant fighting robot. That’s a memory I’d like to call home.

I grew up on shows like Gundam and Robotech/Macross. I dreamed of flying around in space and shooting up Earth’s enemies. In a very base, but uncynical way, Galak-Z lets me do that exactly how I wanted to in my boyhood playground dreams. Though at times it treads a line between knowing and too knowing, Galak-Z is the anime space fighting game that I never had. It’s a fabulous example of how to do an homage to a genre or series and then improve on it.

delusions of grandeur and saving the universe

Galak-Z puts you in control of A-Tak, a freshly minted, hothead pilot with delusions of grandeur and saving the universe. A-Tak is at the controls of the eponymous spacefighter Galak-Z, a state of the art prototype ship that can transform into a giant fighting robot. Supporting you in this venture are mission commander Beam, who supports you by telling you what to do, stroking your ego, lying to you, and bossing you around. Later you meet Crash, a mercenary vendor who sells you upgrades during and between missions. You are also the last ship and last pilot because this scenario wouldn’t be complete without that.

Let’s be clear, I would not be playing this game if there was not the chance that I could not pilot a giant fighting robot. Spaceships are cool and all, but they don’t have beam sabers.

It’s not hard to see the very heavy influences of Macross/Robotech and Gundam at play here, but it is not hard to see the influences on Galak-Z at any other moment, either— and that’s kind of the point. The game works hard to transport you to another place and time, and it’s not the future, but the past. The game means to take you back to the after school anime block, the foreign section of the video store, the weird channel that had TV shows from Japan late at night.


Everything feeds into this. The soundtrack feels as though it’s adoringly recorded from an old VHS tape and remixed. The cell-shaded graphics evoke cartoons; when you lock onto an enemy with missiles and fire off a barrage everything comes together. You are Rick Hunter/Hikaru Ichijyo, or any other spacefighter protagonist, firing those missiles with the same smoke trails, the same sound, and the same wildly unnecessary amount of missiles. It’s enough to take me back to my days watching those very same worn out VHS tapes, a medium the game pays more direct homage to on the pause screen.

being a pilot is hard

But Galak-Z is more than the sum of it its generic parts because it stresses one element that gets lots in the mix when you’re young and watching anime after school: being a pilot is hard. Really hard. Something about watching people like Hikaru Ichijyo or Amuro Ray vanquish their foes in 30 minutes or less belies the fact that it’s hard out there for a pilot. Galak-Z teaches that lesson again and again. Especially, it seems, if you’re me. Even in the early levels, it’s easy to find yourself out- gunned and out-numbered.

Though over the course of the first season you’ll be parceled out abilities that make this job easier, it never gets “easy.” Space in Galak-Z is filled with enemies who want to remind you that despite the fact that your spaceship can turn into a giant death- dealing robot you still need the requisite skill in order to actually do any death dealing. Learning the timing of the dodge or exactly how to circle- strafe are necessary to survival. They were lessons that did not go down easy. This is entirely why I’m so enamored with Galak-Z despite the fact that I’m awful at it. When I succeed I really earned it and it tastes so much sweeter.

Even its larger roguelike underpinnings can be connected to its anime roots. Unlike in American cartoons, people die in Japanese anime, regularly. Ace pilots come and go with the tide. People die of internal hemorrhaging strumming their guitar as they wait for pineapple salads. You die in Galak-Z. A lot— and that’s for the better. You get good or you die and when you die it’s all over, back to the drawing board. As the only pilot left, the entire plot rides on your shoulders and the show can’t go on without you. There are no stunt doubles and no red shirts to absorb enemy fire.

With this one exception, Galak-Z is not a subtle game and it really doesn’t have to be. Most of the shows that it cribs from weren’t. Characters are painfully obvious at times. The line work in the animation isn’t the crispest. Sometimes the action is too convoluted for me to keep pace. But this hot mess is deliriously fun, a game from a simpler time that might find more contemporaries in New Arcade than in other neo-roguelikes.

And listen: you get to be a giant robot with a laser sword.