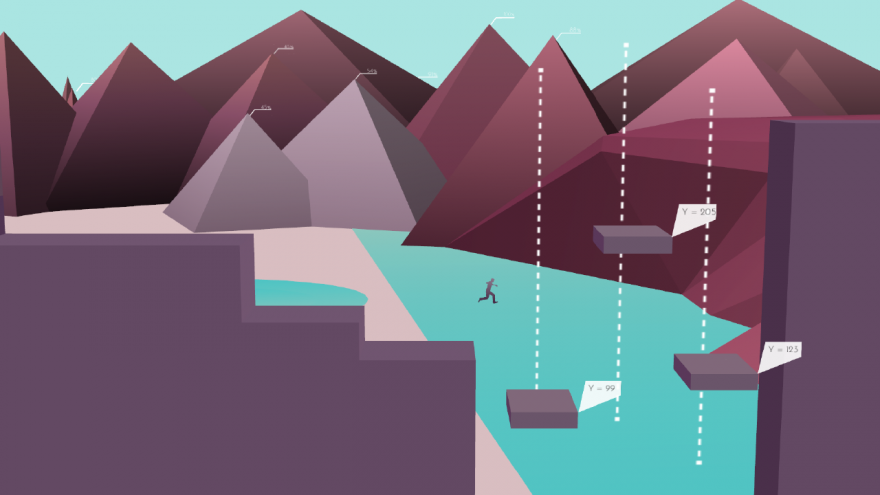 Having wiggled through my requisite college-level Trigonometry, I felt like that was enough. My advisor disagreed. Through the arcane calculations of the registrar, and in the interest of not challenging myself, I took intro to Statistics twice; not because I failed but rather they would give me credit both times. I figured I did well enough the first go round, so why push myself?

Plus, Statistics was conceptually interesting. Putting raw data to use, framing it in terms of the real world, shaping conclusions based on results laid bare—I could get down with that. But both times it was apparent that analyzation comes after learning how to quantify all those numbers into something even worth looking at. What a chore.

Metrico is not a chore, but like my courses, the data it’s dressed in is missing context. It’s a sharply designed platform puzzle game that could only exist for the PS Vita, as it utilizes every input option on the handheld. You’ll jump, tilt, flip, touch screens and rear panels, and point the camera at things. But ultimately I was left wondering “why?”

Metrico is not a chore, but like my courses, the data it’s dressed in is missing context.

Digital Dreams describes the game as a “living world with infographics that directly react to your actions,” which is a very accurate description. Metrico is commenting on the navigation of the data in our lives, and the way we manipulate it for our own interests, which in this case is the desire to get from one side of the screen to the other. The data reflects your input into the Vita and the environment responds accordingly to your actions, though in a constantly shifting manner. Things don’t often respond the same way twice in a row; you always have to feel about and see what happens as you manhandle the console.

Design is really the core concept here. Chris Ware-ian icons instruct you to play with headphones; the loading screen doubles as a subway map of your progress; the levels are sharp-edged and color-coordinated and flat. It follows in the recent string of meticulously crafted iOS games arguing for aesthetics in appearance—Monument Valley, Ridiculous Fishing, Threes!, Hundreds, and so on. Part of what makes these work is making the most of the chosen medium.

And the PS Vita is very much the chosen medium for Metrico. There’s the standard moving left and right and jumping up and down, but it’s quickly revealed that every platform has a percentage or value that often corresponds to those movements, and later, other actions. There’s no particular challenge in discerning how what you do affects the stage, other than moving forward. New levels stop responding to tried and tested methods, and after standing around long enough, a diagram of the Vita itself will pop up to educate you on what aspect of the system you need to utilize. Tilt sensor, rear touch panel, front touch screen, camera—they’re all incorporated here.

The explication is almost nonexistent, though. Metrico has us navigating a world built from bar graphs but doesn’t teach us how to read or interpret the statistics. There is no climax, no conclusions drawn, just trial and error and shifting platforms. I’m not sure why any of this is happening; we have the graphics but not the info. It feels like a missed opportunity. Maybe it’s my fault for anticipating a game that evolves as you play based on incoming analytics. There’s always the possibility that I missed something, and if so Metrico did very little to guide me.

Guidance is what infographics are all about, more so than colors and numbers. Percentages are thrown around but it’s not clear if they are affected by my play style, Twitter feeds, computational linguistics data, website traffic stats, domestic GDP by year, or by remaining signed into PSN, which the game insists will “enhance the experience.” Sometimes tiny pie charts appear and disappear, along with dashed lines across one of the bar graphs—little secrets or achievement indicators, who knows. There is no context, and I’m not motivated by trophies or ambient mystery to dig any deeper, inside or outside the game.

Sometimes tiny pie charts appear and disappear, along with dashed lines across one of the bar graphs

Plus, it’s on the sweet end of short, a fun enough game with some clever challenges, though nowadays it’s practically assumed that content can be added. What we have here simply ebbs and throbs through the last level, where all of your input options do little, and as far as you can tell the Vita isn’t hiding a heart monitor or something. I hesitate to give away the answer, but it wasn’t a feature limited to the Vita.

As refreshing as it was to discover this last bit, the game didn’t really help; it was simply the result of frustration and exhausting all available options. I merely swam through undulating data. Statistics and information are best used to show us the way to make our own conclusions, but there are none to be drawn from Metrico. It is flashy fun, a succinct use of the Vita’s abilities, but the game burns quick and leaves nothing to chew on afterwards, like an infographic that missed its own point.