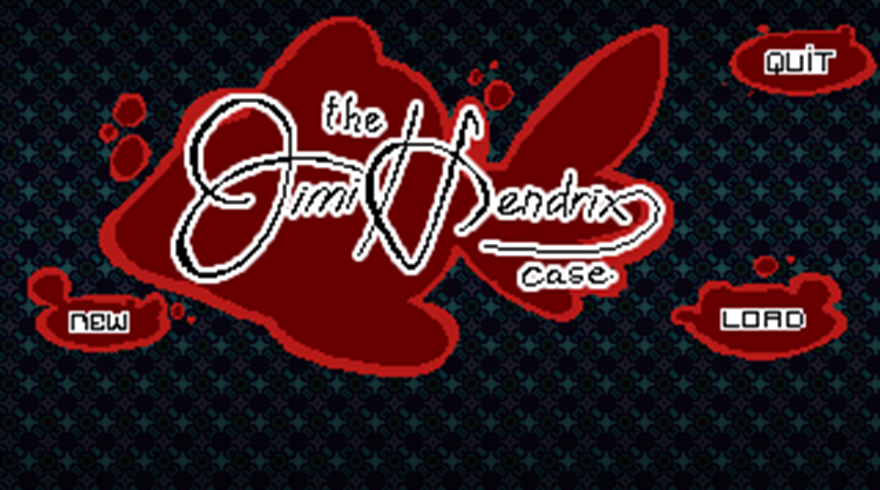 In The Jimi Hendrix Case, Jimi is everywhere. The befuddled cops, the victims, the woman watching from the sidelines; everyone in this game is either Jimi Hendrix, Jimi Hendrix in drag, or Jimi Hendrix’s body. When hovering over a character, the only name that pops up is “Hendrix.” In the middle of all the Hendrixes is you, Jimi Hendrix (who we’ll call Hendrix Prime from here on out), a hardass detective seeking justice for all the little Hendrixes in the world.

It opens on a bloody crime scene; in a tragic turn of events, Hendrix is dead. Hendrix Prime approaches a woman standing on the sidelines, the lovely Ms. Jimi Hendrix. When asked if she’s knows anything about the body she answers, “He could be anyone really, you know. Not trying to be …”

“ … racist,” answers Hendrix Prime. What’s she trying to say? That all Hendrixes look the same?

The Jimi Hendrix Case was made by Gurok, for the latest Monthly Adventure Game Studio jam competition, which had “Hendrix” as its theme. Developers only had to name a single character in their game after Jimi Hendrix, but Gurok chose to build a world full of the man that The Rock and Roll Hall of Fame described as “arguably the greatest instrumentalist in the history of rock music”.

The game is part-mystery, part-puzzle, and even has shooting-game sequences sprinkled throughout. It’s surprisingly violent, and Hendrix Prime won’t hesitate to take Hendrix out.

The Hendrixes each act with their own identities and history intact; they gossip about what Hendrix did to Hendrix, and then remind Hendrix that he should call his mother, Hendrix, more often. After talking with your secretary, Hendrix, you stop by to see Hendrix the mortician to assess the damage done to Hendrix. The entire world is comically familiar, but the cold, hard truth lies somewhere, waiting for you to find it.

Spoiler alert: Hendrix did it.

The Jimi Hendrix Case is available for free on Adventure Game Studio.