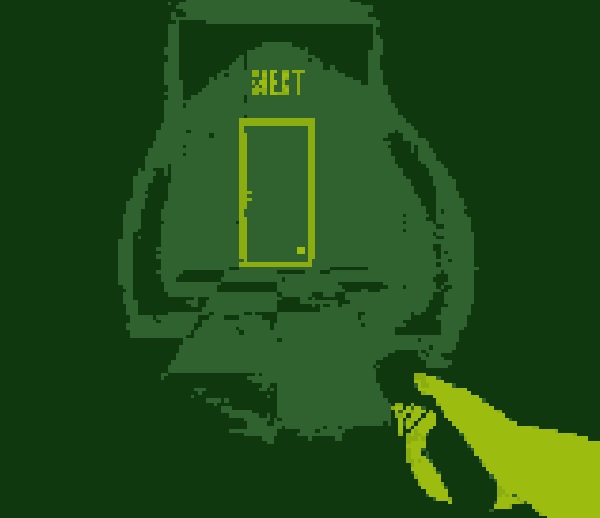 The Game Boy is an icon of ’90s innocence. It’s a kid playing Tetris (1984) while sprawled across their bed. Or a bunch of kids trading Pokémon (1996) in the sun with a Game Link Cable. Nintendo’s original grey handheld is not typically a vessel for horror. But you try telling that to the people who participated in the fifth Game Boy Jam earlier this month.

The challenge of the GBJam is to create a game with the small resolution and limited 4-color palette of the original Game Boy. That means there’s a bunch of green-and-black games ready for playing right now. Most are charming little things, like planting a garden with a smile, and helping a seal eat some fish (truly adorable). There’s also one about throwing babies at a wall to paint it with their blood—that’s an exception.

Don’t be so paranoid

But, as it’s the season, it looks like some people decided the effort was also ripe for creating something a little spookier. And those pixels we usually see as so friendly take to it surprisingly well. It might even be their true calling (black and green make for great witch colors, after all)—I have hard EVIDENCE:

This is a game about being lost in a multi-storey car park. OK, that’s not true, but it does parallel the experience of hunting down the glowing “EXIT” sign when you’re lost amid the concrete. EXIT is actually a puzzle game in an industrial facility. You spin valves and smack laptops to find keys that open doors. Nothing creepy in that, except the dim wailing in the background, the steady rhythm of breath, and your flashlight that regularly cuts out.

As with other pixelated horror games (namely IMSCARED – A Pixelated Nightmare), EXIT makes the most of its lo-fi trappings to create ambiguity in its visuals—you might think you saw something in the dark but you didn’t. Don’t be so paranoid.

There’s a Resident Evil game on the Game Boy Color but there isn’t one on the original Game Boy. Which means Ultimate Evil gets to corner the market in green videogame zombies. Oh, wait, scratch that. What it does do, however, is bring all the dramatic door opening and clunky controls of the first Resident Evil to the Game Boy (well, sorta). Every time you broach a corridor and meet its corner, you have to jam a button and wait for your character to appreciate every new angle as they slowly turn, hoping that a zombie isn’t already nibbling on your ear. Silly, old-fashioned, and unnecessary, sure, but it helps to up the tension.

The Game Boy palette brings a sickly, poisoned feel to the architecture of its sparse mansion. While the pixels fidget into position as you approach them from a distance. What I think I like most about Ultimate Evil is the way the zombies look when they get right up close to you. You can’t see their faces from afar, and so you can only project a visage of horror onto them. But then, when they’re up in your face, they pose for you, trying to look ghastly. Freeze frame them right there and you couldn’t tell whether they’re singing you “Happy Birthday” or about to gnaw on your face (I guess if it isn’t your birthday you can guess the answer).

My anti-virus program says that Coward Town is too dangerous for me. There’s nothing scarier than that. I did get around to playing it eventually and it confirmed my suspicions. The creator of Coward Town, going by the name “Swofl” on the internet, is no stranger to making pixels creep people out. They did it with the horror game Lasting and they did it with Gallergy. Coward Town has more in common with the former given its look: made mostly of animated squares and only a handful of colors.

Its a game at unease with its world—just as the characters are (as implied by the title)—as made visible by the arrangement of pixels, which make the ground looked frayed, or sometimes that its keeled over completely, consumed by a black void. Objects aren’t clearly defined; people hide away by themselves in rooms; the architecture looks like it’s in ruins; the trees are bare and gnarled. This is a pixelscape in abandon. Exploring it feels uneasy.

You can find a load more games in this style over on the GBJam 5 page on itch.io.