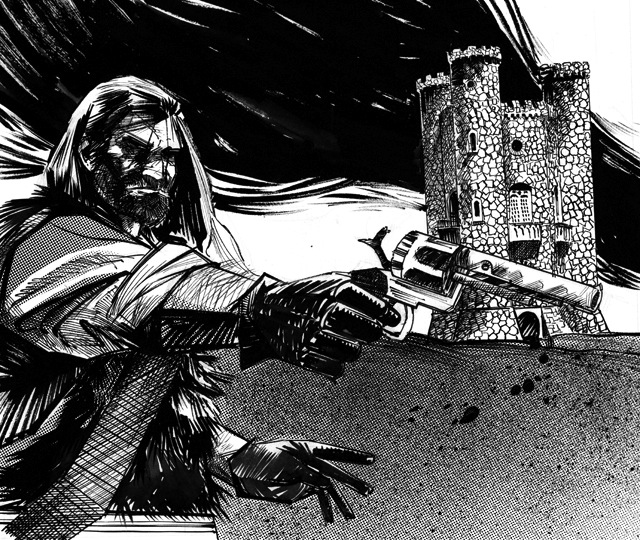 Above the village of Broadway, in the Cotswolds, stands Broadway Tower. It’s a three-story-high structure, with three turrets: a folly which the Arts and Crafts movement would later use as a holiday retreat. And yet when it was built, in the 18th century, its purpose was not to be an attractive tower to overlook the village.

Rather, it was designed to look good from 22 miles away, from the grounds of the Earl of Coventry. Lovely as it is, its real job is to be a romantic piece of background scenery on the horizon.

It was built by the architect James Wyatt, under the supervision of Capability Brown, who was perhaps the foremost landscape architect in English history. Brown’s work reshaped gardens and grounds into carefully designed views for the owners of houses, and defined what landscape architecture itself could be.

We talk a lot about the influence of architecture on game design. Indeed, it’s something Kill Screen asked me about in the original formulations for this column. We can all see the influence on games of a medium in which geometric form and structure is used to influence behavior and manipulate the movement of people through space. It feels like there’s an obvious comparison between architecture and the design of three-dimensional game levels.

But I think landscape gardening is perhaps a much more interesting comparison point for the structure of game spaces, and one that is oft-neglected.

Landscape architecture shapes the behavior and intent of its observers without walls or markers. Instead, it focuses on surprise and delight: as your eye follows the gentle slope of a path down to a lake, it should feel like you discovered this. It feels like a coincidence of marvellous proportions, a secret that you discovered, that the eye is led so gracefully. In fact, it’s a carefully designed experience.

Videogames are the games with no rulebooks.

This reminds me of how game design—not just spatial design, but the designs of rules and systems—can shape player behavior.

Consider how a game like Red Dead Redemption nudges the player forward, encouraging them to explore. As the player travels from A to B, in pursuit of some main quest, they stumble upon striking vistas; all manner of side-quests, some of which may lead into longer chains of content; and eventually return to their main focus—or perhaps are led into a greater plot or system in return for their digression. It feels like a real journey—travel that leads to adventure—and makes the player feel like a unique participant in the world, even though all they’re really encountering is spatial and algorithmic design.

Don’t think this intent-shaping is just aesthetic. As we push and pull the player through a particular experience, we begin to shape the Dynamics (as MDA would have it) of their interactions with the game world. Think about the Street Fighter games. A skilled player will eventually discover that some attacks can immediately be followed by another, without the opponent being able to respond. This is the foundation of the combo: that moves can be chained without punishment. Having discovered the combo, the player develops a new understanding of the game. They now start looking for combo opportunities, looking to see how moves flow. That first hint—the pop-up indicating a combo hit—leads the player deeper into the games systems. This isn’t forcing learning upon the player: it’s gentle leading, letting the player discover it for themselves.

Landscape gardening was not only about creating static vistas; it was important to understand that it was as much about experiencing a landscape in motion—perhaps on foot, or on horseback. Capability Brown used banks of trees to delay the “reveal” of a particular scene until it was particularly appropriate. How different is this from the carefully constructed rollercoasters of the Call of Duty games, ensuring we see the AC-130 dropping flares the moment we emerge from a tunnel? Or, indeed, how different is it from games like the Metroid and Zelda series, delaying the discovery of a new tool or capability until its need is clear, letting the player recall the routes, previously blocked, that are now open to them?

(Of course, Brown wouldn’t resort to anything as crass as Gears of War‘s use of the Y button, used to force the player’s attention to wherever the game designer thinks it’s relevant. No, he’d just rebuild a hillside, or reshape a lake, and guide the eye; much easier).

If there’s one thing in games that reminds me most of Broadway Tower, though, it’s games’ own tower on the hillside: the Citadel of City 17, in Half-Life 2.

The player emerges from a train station to see it, looming over the city, and perhaps then already knows, in the back of their mind, that they will end up there. Framed by the view, visible from everywhere, it becomes a destination. Perhaps they think it’s a folly; designed to be seen from our position but never actually visited. As the game progresses, it becomes clear that, like Broadway Tower, it may serve a narrative purpose when we see it from afar, but it’s fully realized, an intricate construction in its own right. Seen from afar, how could we not want to see it up close?

Landscape gardening is about sensitivity to the existing landscape: a sympathetic form of design that emphasizes existing characteristics through smoke and mirrors.

But in games, there is no existing landscape. As designers and developers, we make everything in the world. How, then, can we shape it like a landscape gardener?

I think it’s about guidance, and finding gentle ways to manipulate player intent without a Y button, or signposting, or endless tutorials. We can shape the environments and systems of games to guide players to where we’d like them to be, to discover combinations of systems that they might not have thought possible—and throughout, ensure that players feel rewarded for their discovery, as if they were the first player in the world to strap C4 onto their jeep in Battlefield or hurl an oil barrel at a helicopter in Crysis.

It feels like a coincidence of marvellous proportions, a secret that you discovered, that the eye is led so gracefully. In fact, it’s a carefully designed experience.

And shaping our players’ behavior is a critical part of designing videogames. When we open a boardgame box, the first thing we see is a rulebook: the game’s system laid bare, as part of the process of learning it. Videogames are the games with no rulebooks. They may have a manual, but that’s merely a guide to interacting with them. Players will discover the rules through playing the game, through experimentation. Will this fall kill me? Will that guard see me? How much range does this gun have? How many attacks can I chain after this move? The first time we push Start, those possibilities are nearly infinite. As designers, we shape players’ behaviors to help them learn those rules. “Don’t waste time looking at this.” “Pay attention to that.” By weighting a player’s attention appropriately, we can help them come to an understanding of our game, and its systems, more swiftly.

Which is why, I think, landscape gardening deserves a second consideration as a resource and source of inspiration for game designers. It may look like it serves a purely aesthetic purpose, but it is, in fact, all about shaping interactions with a landscape. Isn’t that what a game designer does?

The Game Design of Everyday Things is a recurring column that looks at how game design and game objects have connections and antecedents everywhere you look. Tom Armitage is a game designer at Hide & Seek and can be found at infovore.org.