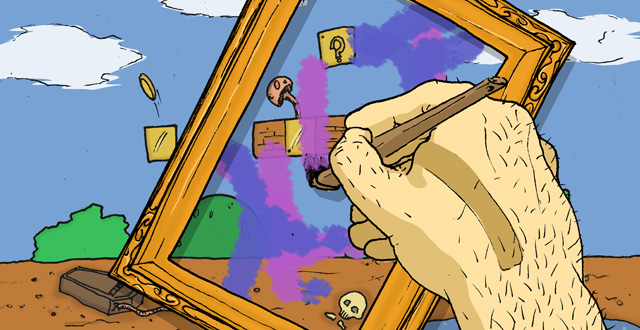 The “games as art” debate has fortunately waned a bit. Good riddance, I say. But a broader interest in videogames as a visual, interactive medium is certainly welcome. At least, that’s how John Sharp, who teaches at the Savannah College of Art and Design, is approaching games. For the last year or so, Sharp has been appearing at conferences to give a crash course in art history for game designers. We were curious why.

Why did you start talking about art and games?

My main motivation for doing it was to raise the level of discourse among developers wanting to be artists without knowing what that meant. A lot of developers have this romantic notion of what art is. They’re rooted in a 19th-century idea that it’s a form of expression and tied to public perceptions. That’s not what art is anymore.

So how would you define it then?

There are a number of different ways to approach this, including the perspective of Berys Gaut, who proposed a cluster concept for defining art, which reads much more like a medical checklist for diagnosis; or a functionalist perspective, in which art serves a particular purpose; or a proceduralist perspective typified by George Dickie, in which something qualifies as art if it fits within the conventions of the contemporary art community and market of a given time and place.

Why do you think game designers are so misinformed?

I’m generalizing, but game developers are coming out of computer science or a different side of universities, if they’ve studied art at all. At most, they’ve had one or two art history classes and most of those are boring. People haven’t taken time to understand what it means to be an artist. I’m still learning, and I’ve been studying art since I was 18. I’m 43 now. I’m recalibrating my understanding constantly.

Are there any developers that you think have a better understanding?

Eric Zimmerman and Nathalie Pozzi, who have been doing Sixteen Tons and Flatlands. They’re fairly sophisticated in terms of how they engage with the discourse. Those are great examples. Mary Flanagan and the work she does, she puts forth as art. I think if it ever gets shipped, the Bill Viola and Tracy Fullerton project. It’s an interesting project because it takes Viola aesthetics and Tracy figuring out what it means to extend those ideas into an interactive form.

Right. But those are all academics. Are there any others?

I would say Mark Essen is another example of sophisticated things that are being embraced. Then there are people like Jodi, Cory Arcangel, and Eddo Stern—who are making games, but they don’t embrace the gameness of games. They’re coming at it from the art side.

Why is that a problem?

It’s not a problem as much as it’s a difference of opinion. I’ve set up the idea that games are a cultural form that demand serious attention. Part of that means working with what are the innate properties of games—that they have rules and player goals and interactivity. There’s some sort of outcome and all the various parts of what it means to be a game. Jodi and Cory use the technology of games, but they’re not as interested in working inside the form.

Jodi has the most famous piece of game art out there, and that’s taking the Wolfenstein 3D engine and swapping out the graphics so the game becomes largely unplayable. It’s a machine for generating imagery rather than a play experience. Or take Super Mario Clouds, where Cory modified an NES cartridge and removed all the graphics except the clouds.

To me, as an art historian, that’s a disruptive gesture to the gameness of the game. But it’s not trying to use the unique qualities of games to create an experience the same way that Eric or Tracy might. I don’t think that should mean that these folks should stop what they are doing. That’s the punk rocker in me, that loves the way they’re tweaking games; but from the point of view of someone who wants to advance the cause of games, I see them as something different. They’re not trying to work with games in a constructive way.

From an art historian’s perspective, are there any promising antecedents of work that does embrace games?

One of my favorite examples was this project called Open Score. This was part of the 9 Evenings projects in the ’60s. Robert Rauschenberg was a well-known painter and Billy Klüver was an employee of Bell Labs. They had two people—a tennis player and then the painter Frank Stella—play a game at night. The racket had sensors and would play a musical note and slightly dim the light. As they played, they were essentially writing a piece of music but also slowly impacting their ability to play the game. Eventually, they couldn’t see what they were doing anymore. Games can be embraced with a value of place—it’s about artists exploring the potential of a game.

I see parallels between where games are now and art in the 15th century. Back then, people didn’t recognize the impact of sculpture and painting, but they were struggling with the terminology. I feel we’re in the game Renaissance. Whether it plays out that way is up to the game development community, but also it’s about how discourse gets going in society. With the Renaissance, it was the painters, but also the patrons and theorists and the people writing books on technique. People are involved in the process of what became an important part of culture. If things continue to shape up, games will be the most important cultural forum.