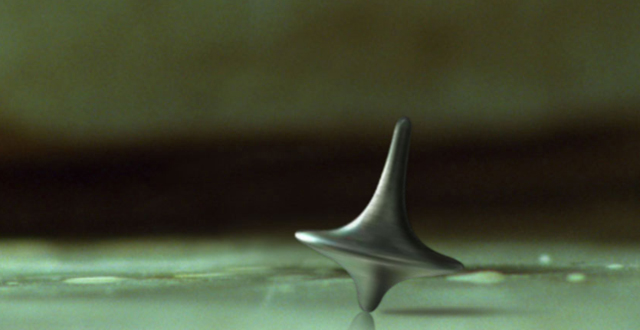 Over a decade ago, when Neo returned to the Matrix after falling down the rabbit hole, he said, in that inimitable Keanu Reeves way, Everything I’ve been taught has been a lie. I suppose Neo’s mother never loved him, and he learned elgebra—not algebra—as a young Matrix-nurtured child. Everything? However unlikely it is that all facts dissipated into falsehoods for Neo, it’s true that he was struck by an unsettling phenomenon. Once Neo discovered the real state of humankind—that machines breed us and feed off our biological energy—the mediated world of the virtual was reduced to something worse than a dream: a digital simulacrum programmed to deceive us. The difference between the virtual and the real was decidedly one of evil versus good. Slavery versus freedom.

As much fun as I had watching The Matrix, or at least the first one, I was quite excited that many of 2010’s films—from Hollywood blockbusters Avatar (I know, last December; close enough), Inception, and Tron: Legacy to the indie tour de force Enter the Void—broke out of the sterile dichotomy between the virtual and the real, and started reckoning with the dynamic interactions between them.

No longer does the virtual simply enslave and deceive. Instead, it filters into the real—blurring any obvious, hierarchal distinction between the two worlds. The virtual in these films resembles more so the surreal life of our subconscious drives and desires, a mysterious source of power and revelation, than the programmed realm of illusion concocted by The Matrix. Perhaps we have come to spend more time on the computer than communicating face-to-face with other flesh-and-bone creatures, or smartphones have practically bent our bodies into question marks. But what I would argue has really shaped the virtual dimension in these films is the videogame, which has now come to nearly permeate our everyday imagination.

In the horribly addictive online role-playing game EverQuest, we used to ask each other what we did in real life. I invested thousands of hours online into developing my avatar, a wood-elf bard (don’t judge me). But as much as I wanted to be one, I was sadly not a wood-elf bard, nor even a rapper, in real life. James Cameron’s Avatar pretty much took our collective fantasy of being otherwise to its extreme. Not only does Jake Sully (Sam Worthington) possess his Na’vi avatar like a ghost, he also becomes it so thoroughly that he miraculously overturns who he is in real life, and finally shakes off his mortal coil to be reincarnated in Na’vi form. This is a true Saul-falling-off-the-horse transformation story, but told in videogame terminology. It’s no simple feat that Pandora oftentimes inspired more awe than our own charred world: Cameron’s 3D fusion camera system finally allowed the seductive quality of film art to catch up—indeed, even surpass—the immersive, hyperreal environments crafted from videogame technology.

In Enter the Void, director Gaspar Noé plays with the idea of an astral projection, an out-of-body-experience, in order to blur the lines between appearance and reality. It’s never made clear whether Oscar (Nathaniel Brown) was reincarnated through his stripper sister’s womb or whether he merely hallucinated the whole odyssey in his last dying moments, drugged out on DMT. Noé accomplishes this ambiguity through enthralling camerawork that recalls the dynamic framing of videogame environments. The camera embodies Oscar’s perspective, floating from first-person to a spectral third-person overview after Oscar is fatally shot in a botched drug bust. It eventually dissolves the audience’s own gaze into Oscar’s, inducing an uncanny experience of descending into his conscious life, quite similar to the game experience of entering the void of an avatar.

But the film becomes something of a videogame nightmare where we lose our remote control over the avatar in the throes of death. We cannot guide Oscar as if he were a videogame avatar making his way through the film’s sex-and-drug noir environment; after all, Oscar is a cinematic character, his destiny already prerecorded and predetermined. Despite being completely absorbed within Oscar’s ghost consciousness, we can only watch, without any autonomy over the course of the story, the past, present, and future movements of his life piece together on-screen according to external laws and hidden impulses beyond our determination. Our freedom as audience degenerates into the purely aesthetic form of our trying to understand what the disoriented narrative means.

Cobb (Leonardo DiCaprio) is haunted by a desire to make sense of his own life story in Christopher Nolan’s Inception. He’s thrown into the crosshairs between architected dream worlds and an elusive reality, made even more tenuous by the film’s inconclusive ending. While Nolan used the notion of incepting a belief into another person’s dreams as an allegory for film itself, inception is ultimately closer to the interactive experience of playing a real-time MMO like World of Warcraft. In a game, you are not just subtly incepted with beliefs, but also a whole world of experiences, a convincing sense of an alter-reality. Developing an avatar within a circumscribed virtual environment really does feel like your own accomplishment, even though it’s decidedly mediated by a game company’s design team and programmers. But Inception reminds us that our dreams are hardly our own: They are shared, living entities, bought and sold, refracted against others, and oftentimes penetrated by deceivers and thieves (no offense, Blizzard).

Suppose we really get lost in those dreams. Enter freshman director Joseph Kosinski’s Tron: Legacy, an alternative take on the dual-world thesis illustrated so brazenly in The Matrix. Videogame and software designer Kevin Flynn (Jeff Bridges) finds himself stuck in the digital dimension he created, a pulsating rhizome of geometric forms called the Grid, where his program alter-ego Clu has usurped power. Clu banishes Flynn outside the boundaries of the Grid and devises a strategy for infiltrating his code into the real world. In the process, Clu “purges”—commits genocide against—a new animate-digital life form, ISOs, who supposedly hold the key for emancipating the human condition. Yes, it’s another story of advanced technology forsaking its creators and setting out to pursue its own maddeningly violent destiny. Why is technology so bent on destruction without the golden heart of humankind guiding its path? Still, the virtual world in Tron does not regress completely into a Matrix-like realm of necessary enslavement. It holds out on possibilities—the elusive dream of open-source liberation—but only if we play the game right.

These films all navigate a central tension between autonomy and domination. The virtual—whether in the form of dreams, avatars, simulated environments, art, or illusions—can just as easily enslave as liberate, and typically, it does something of both. What tends to handle this tension well is the art of play. That’s perhaps why videogames have become such a fundamental trope, whether implicitly or explicitly, in recent cinema concerned with how the spectacle of film plays with audiences, and how the story’s characters play with the multidimensional virtual worlds in which they are embedded. No other model illustrates so clearly how a person can still be autonomous in navigating a code-bound virtual world, let alone the law-bound natural world. But this autonomy depends on how we choose to play. The achievement relies just as much on the player as the creator.