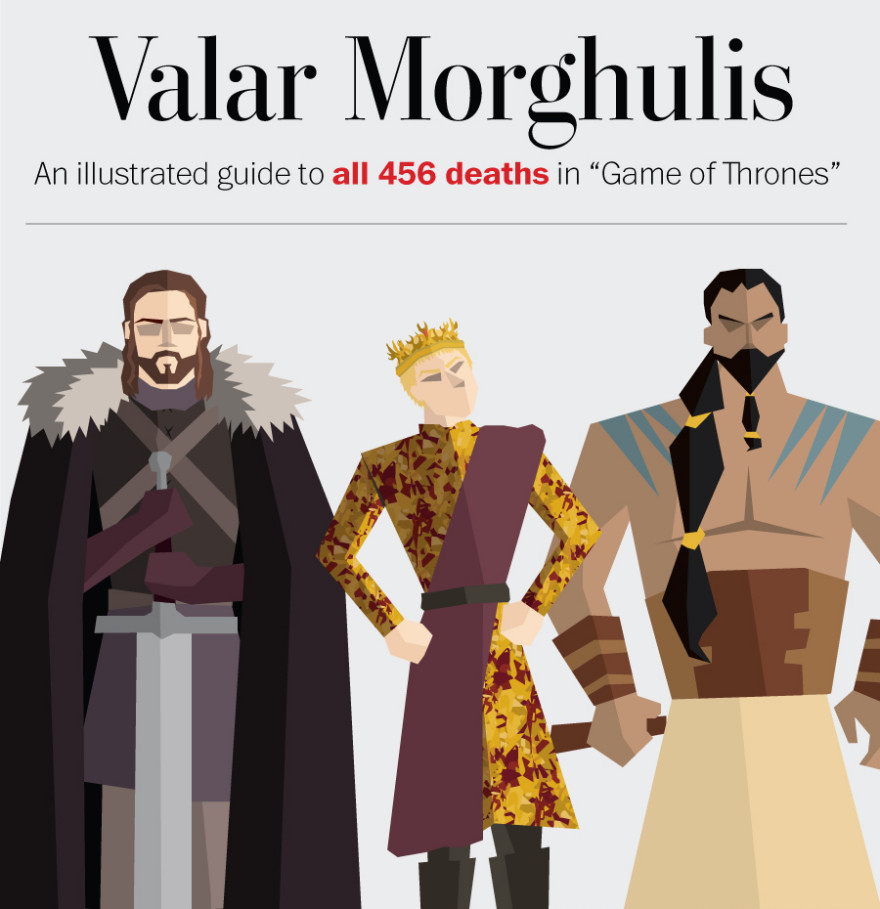 [Needless to say: tread carefully, for the the night is dark and this illustrated guide is full of spoilers.]

I probably don’t have to tell you that videogames get a lot of flack for being hyper-violent. But considering the kind of company games have been keeping lately, in terms of unusually high body counts, I’d say we’re half way to an edgy TV network airing a nihilistic adaptation of Man Hunt.

Thanks to ruthless, gore-filled, and outrageously popular shows like Game of Thrones, The Walking Dead, and Dexter, ultra violent media seems somehow to have slipped back into the good graces of the general public. Nowadays, little else brings modern people closer to the mentality of their ancient, (supposedly) savage Italian ancestors than the phrase “Valar Morghulis.” The Valyrian decree that “all men must die” encompasses our craving for violent catharsis. As it was for the gladiators in the colosseums, so it will be for the HD faces returning to our TV boxes this coming Sunday. There’s only one way to please the audience: and that’s with tons more bloodshed.

To prepare us for the imminent winter Game of Thrones characters are always moaning about, The Washington Post compiled a nifty illustration to help you relieve all the 456 happy memories we’ve already shared together. Like remember that one time you thought the world was a hopeful place, before everyone and everything you ever loved promptly got stabbed in the face? Or how about when you gagged a little from how much of Ned Stark’s decapitated head they allowed to be shown on television. C’mon, you gotta remember almost puking at Sean Beans toppling head, right?!

The guide is a well-designed, comprehensive overview of the when, why, where, who, and by whom of all the tragedies (and victories) from the past four seasons. The illustration reads kind of like a Westeros Survival Guide, too, showing you which characters (Bronn and The Hound) and locations (King’s Landing and The Wall) to steer clear of the most.

But the most telling aspect of the guide remains the sheer amount of collateral damage that follows the game of thrones. The bulk of the 456 illustrated deaths are an in-memoriam to nameless bannermen, just like The Walking Dead uses zombie deaths as an expendable currency to up the bloodshed. I’ve been searching for a significant difference between the violent ends met by nameless bannermen and zombies in TV shows, and the enemy hordes killed in videogames. That is to say, well, there isn’t much of a difference at all, outside of some noticeable criticism in the videogame department. While videogame crusaders bemoan the mindless and gratuitous violence of our medium, you’ll be hard pressed to find a news anchor implying there’s a correlation between watching Game of Thrones and being a mass murderer. Why is that?

Obviously, being a relatively new media, videogames are still somewhat stigmatized in that regard. And to prove it, I dug into the double standard of violence with a little numerical experiment. Taking the closest equivalent possible, I actually went back and counted each death in Telltale’s adventure game version of GoT (using the same criteria proposed by Washington Post). In the first three episodes that have been released, there were approximately fifty deaths—possibly more or less depending on your choices. Then, I cross-referenced the TV show counterparts to these episodes (season 3, 8-10 and season 4, 1-2), only to discover HBO clocked in at  forty-seven deaths.

an in-memoriam to nameless bannermen

But, let’s be clear, the usual criticism of murder in videogames is aimed at the rewards given for the act, not so much the numbers. And, so far, no one has been upset about Telltale’s videogame adaptation. I don’t want to split hairs here either. Videogame deaths, TV deaths, book deaths—they’re all pretty much irrelevant when quantifying real-world violence. One new psychological study will say media violence for sure causes aggression in kids who play games. A rebuttal published a year later will say games are actually the savior of humanity and cognitive brain function.

It doesn’t seem like the best use of our time and effort, this battle to determine whether or not there may be a minor significance between videogames and short-term aggression. It might be more productive to tackle the already well-known, real-world factors that lead to more violence: like family and socioeconomic stability, and a good education.

Funnily enough, one of the more promising studies into the effects of violent media on people was discovered by a famous social theorist, rather than a psychologist. Cultivation theory, developed by George Gerbner, convincingly argues that the long term effect of violent TV on human beings is not aggression, but fear. Gerbner called his finding the “mean world syndrome,” after discovering a significant correlation between the amount of TV a person watched and how much they thought of the world as a harsh and unforgiving place.

So, this Sunday during the premiere, take all the twisted pleasure you want from the inevitable Game of Thrones bloodshed. Enjoying violent media wont make you a monster, just like playing Doom won’t turn you into a mass shooter. We can, luckily, all have our blood and drink it too (sorry—I had to).

Note: The Washington Post originally got its inspiration from a graphic tribute entitled Where Have All the Wild Things Gone by Nigel Evan Daniels.