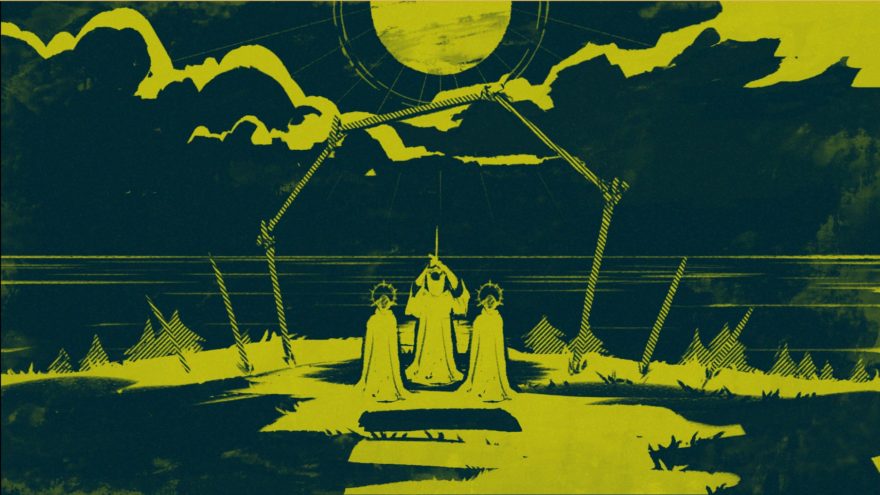 Sometimes you have to make sacrifices. In publisher Kitfox Games’s upcoming The Shrouded Isle, those sacrifices are lives. It’s a cult village management game to be released in February 2017 by design lead Jongwoo Kim, writer Tanya Short, and artist Erica Lahaie.

The Shrouded Isle is meant as a haunting game that forces players to contemplate the lengths they’d go to provide for their people. This goes beyond the food and shelter they must provide for those who live in the village, as the player must placate the gods, too—by offering up a human life. It’ll be a game that evokes apathetic power outside of human grasp according to its creators. “Chernobog is a Slavic deity that conjures up such a potent image that it inspires everyone on the team,” Short said, referring to one of the team’s inspirations.

It’s normal for us to consider gods as only good

“In Western culture we’re used to thinking of evil as being lesser than good—as ‘just demons’,” Short said. She posits that this is why we find comfort in mainstream religion: it’s normal for us to consider gods as only good. But maybe they’re not. If gods can be evil, “or, at the very least,” Short added, “deeply apathetic to human survival,” then hope is lost, replaced with simple pragmatism.

These ideas came from looking at parts of culture such as Chernobog, a Slavic deity that “conjures up such a potent image that it inspires everyone on the team,” according to Short. What has been gleaned from historical sources tells us that Chernobog was considered an accursed god to ancient Slavs. And it’s this that acts as a model for the gods in The Shrouded Isle, to whom the player make sacrifices to, and then try to justify them in regards to a belief system that offers no hope, only survival.

Toying with a variation on monochrome, The Shrouded Isle’s striking art only adds to the “bleak, oppressive” atmosphere of the game—but it was originally influenced by a time constraint. Lahaie initially restricted the palette to meet deadlines on the game’s prototype, which was made in three days during the Ludum Dare 33 game jam. It worked in the game’s favor, though. The Shrouded Isle will continue to play up its bleakness past the prototype’s expanded isle: it’s a symbol of the isle’s lack of “clear path to prosperity or happiness,” Short said.

All of the community members in The Shrouded Isle—who are each a part of one of five families—will have procedurally generated virtues, flaws, and relationships, all of which will impact how they relate to each other and to the player. They’ll react to the sacrificial decisions being made, which will, in turn, determine the player’s outcome in the game. “The prototype was primarily an arcade game of surviving as long as possible,” Short said. “The Shrouded Isle will offer alternative conclusions.”

Kitfox Games’ The Shrouded Isle is scheduled for release in February 2017. See the trailer on the game’s official website.