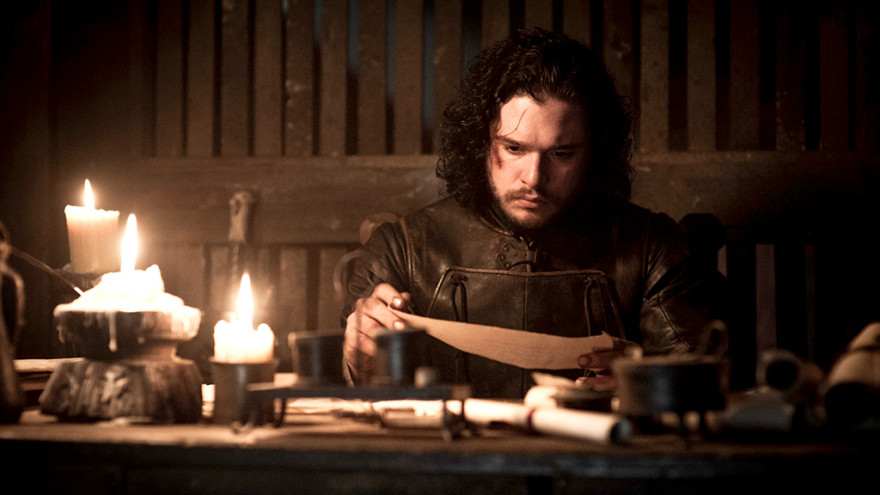 A few episodes ago, in yet another classic Stannis-Davos argument, the false king declared his strategic position—while also basically summing up the entirety of the Game of Thrones fiction: “We march to victory, or we march to defeat. But we go forward. Only forward.”

To a great extent, the forward momentum of the plot is how Game of Thrones sinks its hooks into us. As the titular allusion suggests, the fiction unfolds with the same kind of inertia as a game. The threat and possibility of winning or losing drives the players forever onward. As an audience, we know that, no matter how meandering the narrative might feel (particularly for book readers), winter is coming. Even for the characters who do not fully grasp what those words mean, the threat hangs high.

Each story line moves with the momentum of a freight train, the characters all battling their own imminent failures and possible gains. Whether it’s Sansa, Littlefinger, Brienne, Stannis, Jon Snow, or Dany, everyone marches forward into some gamble they cannot turn back from. Even Cersei must soldier on, moving toward her singular goal, regardless of what challenges are flung at her. No matter who the character is, the rules of the fiction—the fact that, in the game of thrones, you either win or you die—dictate the players path. For several characters throughout the season five finale, they must only move forward because turning back is defeat as much as soldiering on means defeat.

With the (seemingly final) moments of Stannis Baratheon, Game of Thrones once again establishes that—before even sexposition—this is a story primarily about war and strategy. The birds-eye angle of the battlefront rendered viewers of the HBO show essentially players of a Civilization game. Do your soldiers scatter in the face of defeat, or do they cry out in fidelity before pushing onward into death?

Part of Stannis’ military brilliance comes from this kind of relentless progression path. He’d drag his men through hell and back, even if it meant the slightest chance at a narrow victory. As evidenced by his final battle, however, his stubbornness as a player proves his ultimate undoing, revealing the pitfalls of an inflexible character in a game that demands turn-by-turn strategies. Because, say we called this a game of Dungeons and Dragons rather than a “game of thrones,” can you imagine a player that, after his attempt to use blood magic is so ineffective, insists on continuing with that same plan as if it had worked?

As with Varys advice to Tyrion, when it comes to the game of thrones, we’ve seen that “information is the key. You need to learn your enemies strengths and strategies.” The problem with Stannis—and perhaps even Cersei’s tactics—is spending too much time considering their own motivation and tactic rather than keeping their eyes on the armies circling into formation around them.

As the finality of death claims yet another fan favorite

There’s one key difference between the defeats in Game of Thrones versus videogames. Characters of the game of thrones do not respawn after failure (unless you’re Dondarrion, of course). Failure is final. As the finality of death claims yet another fan favorite, many are already attempting to create a respawn theory. After all, fans are saying, didn’t Qyburn just resurrect the Mountain in this episode? Why would Melisandre return? Not even confirmation from actor Kit Harrington will placate the masses on this one.

But constructing theories on Jon coming back as “Snow, the local friendly white walker,” is missing the point entirely. In the Game of Thrones fiction, characters can only respawn through lineage. As Jamie’s touching-turned-terrible scene with Myrcella and Dany’s frustrated dialogue with Drogon shows, our children either choke out or let our dreams soar. Through them and them alone, we see a path forward—a way to survive a game where you either win or you die.

We cannot hope that Ned Stark’s head will get sown back onto his body only to can carry on yelling about duty and winter. At best, we can hope Ned’s ideals, strategies, and verbiage live on through the children he helped raise. Of course, we’ve seen Jon Snow take up the mantel as a pouty, unpopular do-gooder. And we’ve seen him die for it just like Ned did. But as a father of sorts (or at the very least, a leader) himself, Jon Snow has left behind his own seeds to carry out his life’s work. We can only hope the wildlings fair better than the pretty crow did when it comes to the viral army of white walkers moving ever closer to Westeros.