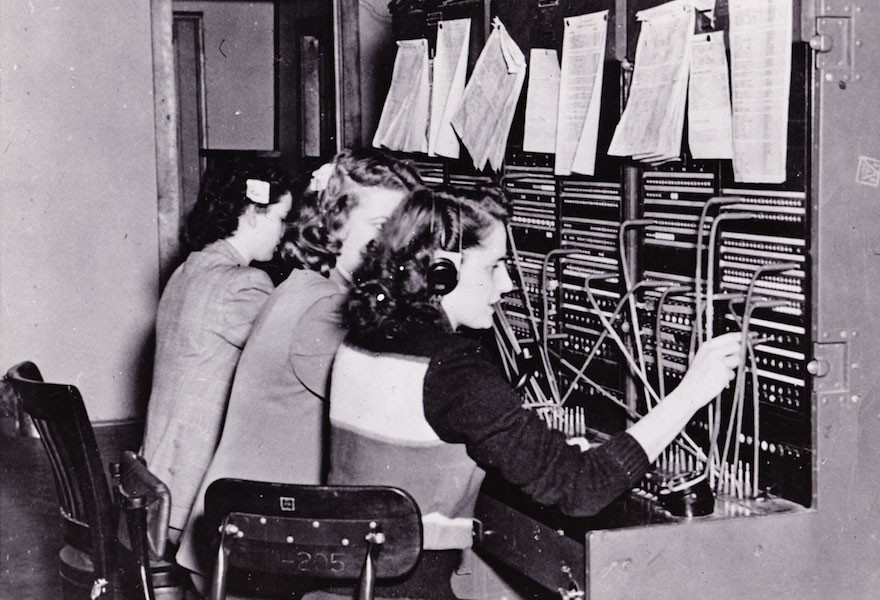 It must be difficult for a game made on 89-year-old hardware to stand out anywhere, let alone at a conference brimming with excitement over upcoming virtual reality headsets like PlayStation VR and the HTC Vive—it wouldn’t help that this game assigns the player with a menial day job that’s now handled by computers, either. But when Kill Screen’s Jess Joho visited the alternate controller exhibition at this year’s GDC, she found herself most interested not in Sony and Valve’s latest technology, but rather Hello Operator, a game played with an actual telephone switchboard that first saw use in 1927.

Hello Operator has you take on the role of a telephone operator from the 1920s, using an antique controller to manage dozens of impatient customers across a limited number of three or four phone lines. Intrigued, Joho sat down with creator Mike Lazer-Walker to ask him some of the questions that crossed her mind while she was playing the game.

“For me, this is really interesting, because with the original female computers and then with telephone operators, there’s this trend in our technology that women are there to connect us,” explained Joho. “Do you think people respect this kind of work? Is that something you were going for with this?”

“I’m really interested in exploring that,” Lazer-Walker told her, going into the history of real-life telephone operators. “What’s fascinating about this is that, originally, switchboard operators were men. But the work was too tiring and they were so gruff and so nasty that they then brought in the women instead.” He compared it to the early days of computing in which women handled the tasks men didn’t want. “It was sort of the opposite of computing,” explained Lazer-Walker. “In computing, no one wanted to do it at first, so it was considered women’s work, and then the men came in when they found it interesting enough.”

“So, then, who have you seen take to this kind of work?” asked Joho.

“A thing about this is it’s really hard, but at the same time, it’s very good at getting you into a state of flow,” Lazer-Walker replied. “So it’s interesting seeing who the people are who really enjoy sitting down and feeling challenged.” Of course, the novelty of the controller also draws some players in, as he continued: “And similarly, it’s neat to find the players who get into the role play and end up feeling really bad for the people they’re leaving on the lines.”

“How does the way you physically interact with a story affect it?”

Harkening to classic work games Diner Dash (2004) and Tapper (1983), Lazer-Walker explained that even though Hello Operator is about menial labor, working a job and balancing disgruntled customers can actually be quite enjoyable within the context of a game. “Time management games are such a well-worn genre that as an industry, we know how to design these and make them fun.”

Lazer-Walker had previously told Joho that he was also interested in giving the game a narrative, and curious how that might work within the context of labor, she asked how he planned to address story within that experience. “I’m really interested in exploring what happens when you can listen in on conversations,” Lazer-Walker replied. “What does it mean when three people are making calls at once and you have to decide who to listen to? How can I make sure that you have an interesting story? Is it like a murder mystery, where you have to figure out who did it? There’s a really big narrative possibility space there.”

This reminded Joho of her days playing hotel or other “ridiculously menial things” as a child, and the stories she would come up with while playing. She asked if that “love of getting the job done” was something that Lazer-Walker wanted to capture with Hello Operator. “Yeah, and I think the two things that really interest me about this are that sort of menial getting into a state of flow and having fun, and doing that in context of old technology,” replied Lazer-Walker. “And then on the other side, looking at how you take the same physicality and apply it to storytelling. How does the way you physically interact with a story affect it?”

After all, this isn’t Lazer-Walker’s first time experimenting with alternate controllers. Prior to this, he developed a game called What Hath God Wrought, named after the first message sent via telegraph. Like Hello Operator, What Hath God Wrought also used antique tech as its controller, this time a 19th century telegraph machine. By having players use an actual telegraph, Mike hoped to make them more familiar with morse code despite most of them having no experience with it. Seeing the game as a predecessor to Hello Operator, he explained that with both titles, he was asking “How can we take these things that are sort of interesting and compelling and use those to get you to learn about old technology?”

The result are games that call back to eras where the modern conveniences players might take for granted today, such as being able to place a call without having to go through an operator, were handled by real people who were working real jobs. In taking on these roles, players are able to learn, if only for a small fraction of time, a bit more of what these people dealt with in their daily lives. “I can’t teach you morse code in five minutes,” Lazer-Walker explained. “But can I make you feel like you know morse code?”

You can learn more about Hello Operator over on its website. Check out the rest of our coverage of GDC 2016 here.