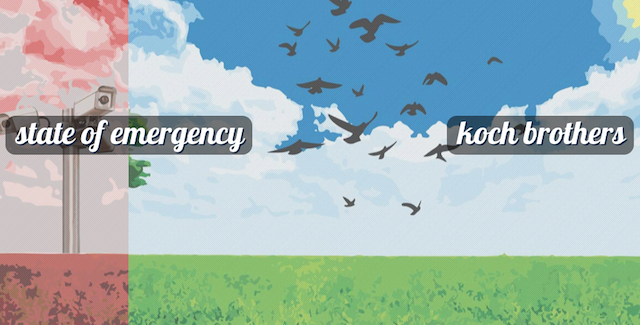 Since this summer when Edward Snowden informed the world that the NSA is snooping on all of us, I’ve been a little more cautious about what I say online. More than a few instant messages that could be taken the wrong way have ended in a nervous joke about now being on the terrorist watch list.

If you don’t have that phobia, the NSA Game is here to instill it in you.

The NSA Game shows us how easy it is to be mistaken for a potential enemy of the state by emailing, googling, or texting the wrong words. The idea is that you choose between two words; one which is monitored by Prism, the US government’s massive data mining program, and the other, which is safe. The game challenges you to survive for ten rounds. This proves tougher than you might think.

I’m not very good at all at the game. Some words are obvious red flags: drug cartel, organized crime, hamas, disaster assistance. (In case you’re wondering how the author knows that these words are suspect, they were released through the Freedom of Information Act.) That said, I’m still pretty terrible at the game. I’ve played it four times and the closest I’ve come to winning is round nine.

What games like the NSA Game tell us, besides to eliminate the word “waterborn” from our vocabulary, is that games have become a viable alternative to traditional news. They can be turned out fast and make a point through what game guru Ian Bogost calls “procedural rhetoric” (not on the NSA watch list, by the way), which is a way of using the processes of computers to propose an argument about current events. The NSA Game gets this right, as you’ll find out at the fateful endgame.