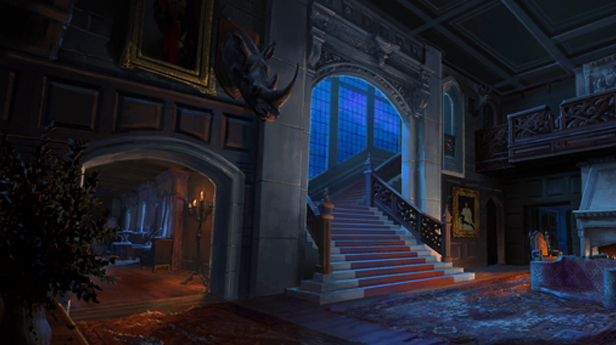 Alone is the perfect virtual reality game for anyone who doesn’t value a peaceful night’s sleep. Currently in development for the Oculus Rift headset — which has yet to be released itself — players will explore ‘The Witching Hour,’ Alone’s game-within-a-game.

It’s “like the Inception of video games,” Co-designer Dan Wallace explains. Donning the virtual reality headset, the player is transported into an ordinary living room. There’s a television directly across from the couch they’re (virtually) sitting on, and when The Witching Hour’s intro screen appears, they begin playing a first-person shooter game. But slowly, players will realize that not all is right with the living room around them. Shadows play on walls and unexplained noises sound nearby — mimicking the delightful experience of being home alone at night, feeling utterly convinced that something is out to get you. The objective of Alone, then, is to finish The Witching Hour without freaking out.

Right now, the game is only set to last a maximum of 45 minutes, which the developers say will ensure the player is engaged from start to finish. (Sitting on a fake couch for longer might tire some people out, they imagine.) But the team is working on some alternative endings to give players a choose-your-own-adventure experience, thus lengthening the game.

As of this writing, Alone has raised a little under one-fifth of its $25,000 goal on Kickstarter with 22 days left to go.

This post was originally written by Sara Boboltz for PSFK