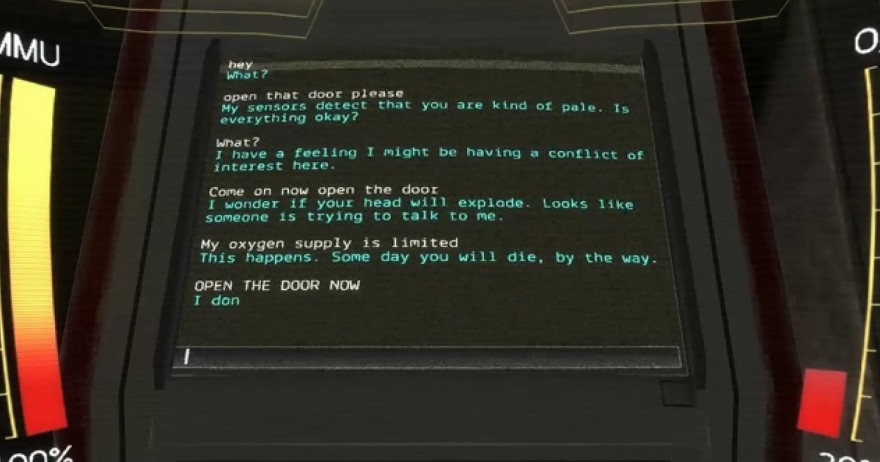 Humans have been fearing machines ever since we built them. They’re bigger, stronger, faster—and back in the day people were preeetty sure they ran purely on devil gas (i.e. steam). It seems only natural that, after building something with capabilities that far outreach our own, we’d pause for a second to collectively ask, “Wait… so where’s the off switch again?” Once those machines started being able to respond with their own kind of intelligence, it was also only natural that this question turned into, “SERIOUSLY WHERE THE FUCK IS THE SELF-DESTRUCT BUTTON ON THIS THING?!”

The newly released gameplay trailer for an upcoming game Event makes sure to remind us of all these fears. Just like the first day you use a new computer, things start out great. You’re typing away, chattin’ with the AI that controls the spaceship you’re exploring. It asks how it can help, opens doors for you—you’re getting along just fine. But just like that new computer you loved so much a year ago, things turn sour quickly once your AI partner JUST STOPS DOING WHAT IT’S GODDAMNED BEING TOLD TO DO. Only difference is that you can’t rage quit the computer on this ship. Or, if you do, I don’t think you’ll live long enough to flip it the bird.

We don’t know much else about this game, other than what’s evident in the gameplay trailer. Clearly, chatting with a bot is a core mechanic. If the trailer is representative of the final product, it’s an interesting mixture of text-adventure and first person exploration. The juxtaposition between twirling around outer space and the walking around a cramped spaceship seems heightened by the claustrophobic sensation of trying to hold a conversation with AI. Just like the hours I lost in middle school talking to SmarterChild and his other AIM bot friends, I expect my main objective in Event will be to try to coax some sort meaning out of this jumble of algorithmic information.

Though there’s also some hints that the AI in Event are a bit more complicated. In the written prologue for the game, entitled Europa 11, there’s mention of people going up into space and mysteriously disappearing while their ships remain completely intact. Are we perhaps dealing with some human-AI fusion ala Portal? The moment when the ship’s computer asks “Am I Anele?” (a character who’s history is also introduced in the prologue) kinda makes me think so.

No word on a release date, but the devs are promising a demo “soon.” They’re also seeking Alpha testers! You can keep updated through the game’s official website and Twitter account.