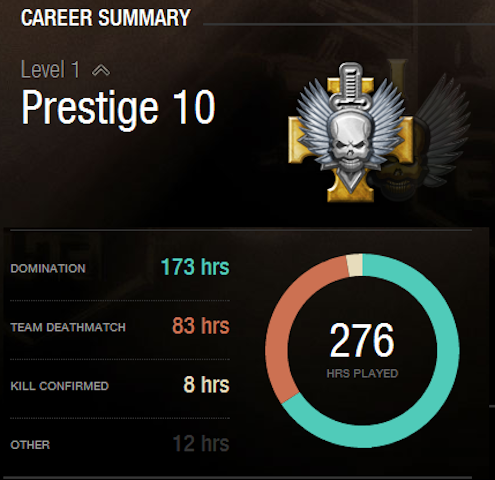 If you’ve used Tumblr for long enough, you find yourself with a collection of people whom you’ve followed on a whim; people to whom your attachment is negligible. These people are often teenagers, a fact that leaves you mildly embarassed, but also jealous that these kids’ tastes developed faster in a digital age than yours ever could have. For me, one of these people is a man named Ron Workman, who as far as I can tell is a.) not a teenager, b.) works as a “technology consultant” and c.) represents some sort of id for gamer psyche.

Nonetheless, his Tumblr spits content innocuously into my feed and I glance at his posts the way one might peek at a neighbor in nearby apartment complex, gaining little insights into their world and occasionally catching them in the odd act of shame, or, in this case, clarity. Last month, Ron posted the above achievement.

Then the following note:

276 hours in multiplayer aka 11.5 non-stop days worth of Call of Duty and I finally made it to 10th Prestige. My first time ever on any COD game getting to this point. Am I proud? No. I am relieved though.

276 hours. Let this marinate. For the time that Ron spent on a *single* game he could have: finished the works of Tolstoy, listened to most of the major works of 20th century pop music (or at least a portion of Lil B’s mixtapes), or watched every film on the AFI 100 (or a rough quarter of the Criterion Collection.) And that is the moment of self-realization that Ron has reached, a moment of ugly personal comprehension, the inkling, step one Alcoholics Anoymous moment “that my life has become unmanageable.” From Ron’s weary eyes and twisted mouth: “To let one game or franchise (even a great one) take up so much of your time makes it hard to enjoy gaming as a whole.”

In short, games are too damn long.

Over the past few years in writing about games and talking to game makers, I have often been disappointed, and almost never surprised by, their cultural touchstones. More often than not, when I ask a game designer who influenced or inspired them, the answers come from a pat set of characters: Tolkien, John Romero, George Lucas. Typical geek shit. In one particular instance, in passing, I asked a game designer if he knew of information design pioneer Edward Tufte was. He shook his head. Granted, this shouldn’t matter for most people, even ostensibly “cultured” ones, but this was to someone who was overseeing game design for a large independent franchise that relied on conveying information to public in a succinct, efficient, and honest fashion. Tufte, I think, would be quite helpful.

(For the record this is not something that is split along indie/mainstream lines. In fact, in independent game communities, the problem has metastasized into a sort of self-referential navel-gazing that’s resulted in a swath of “important” games by people who played Passage and now make games like Passage. This is not good.)

This happens for several reasons. Traditional game design programs are only starting to offer liberal arts programs to round out those left-brain types. Games as a culture have been segregated and thus prevented from engaging other art forms on the honest level of creator-vis-creator. Games’ status as low culture has become a self-fulfilling, transitive declaration that games are stupid ergo those who play them are stupid ad infinitum. This raises the nervous proposition that perhaps games really *are* low culture and now I can’t sleep because my headmaster/mom/conscience was right. The list goes on.

But by far, the most convincing argument is that games themselves have been their own worst enemy; that one’s commitment to games is so all-encompassing that mastery of the medium demands an almost exclusive, selfish dedication of time, patience, and education that it shutters out a rounded cultural existence.

We have defaulted to length as a defining principle of games as a medium.

What’s worse is that long games have been presented as a moral imperative on the part of game makers. A game’s worth is determined by cost/hour calculations — a 60 hour game is a better “value” because it offers more enjoyment than a three-hour movie at a $15 movie ticket. This assessment not only reduces an art form to the cold metrics of cash (Is MoMA a better value than the New Museum because it has more paintings?) but it makes wicked use of what economists call “default bias.” New Yorker columnist James Surowiecki describes the concept in relation to the Big Apple’s recent soda ban:

If you offer a choice in which one option is seen as a default, most people go for that default option. People who are automatically enrolled in a retirement plan, for instance, are more likely to stay with their original plan than those who choose plans for themselves. In countries where people have to choose to be an organ donor, most people aren’t donors; in countries where people have to actively say they don’t want to be an organ donor, most are donors. The soda ban makes sixteen ounces or less the default option for soda drinkers; if they want more, they’ll have to make an extra effort.

Essentially, we have defaulted to length as one of the key defining principles of games as a medium. In this case, the “extra effort” means not playing Skyrim through to completion at the risk of having your gamer card revoked.

There are signs of change, but, of course, our value calculation carries along with us. Games like Journey and the episodic content for The Walking Dead point to a future of shorter content but are the exception to the rule. In particular, the domain of games on iOS and Android devices has suffered from a lack of importance because we don’t give cultural weight to these fleeting transactions. These games are invariably free or cheap (under 5 dollars) yet the perception remains these experiences are “time-wasters” because the time spent playing them is disposable. We do not hold such values in other mediums: Pixar has their shorts, Chekhov wrote in spurts, Motown kept everything under 4 minutes.

For the last few years, we’ve been pushing this idea that games are in need of a vernacular. The reality is that very few ever cross into the mainstream without the backing of a large marketing budget. Angry Birds and Minecraft are the two immediate independent successes that come to mind, but until we begin to look at breadth of game experiences as the sign of a well-played life, and not depth in a particular title, we will continue to pass each other like ships in the night.