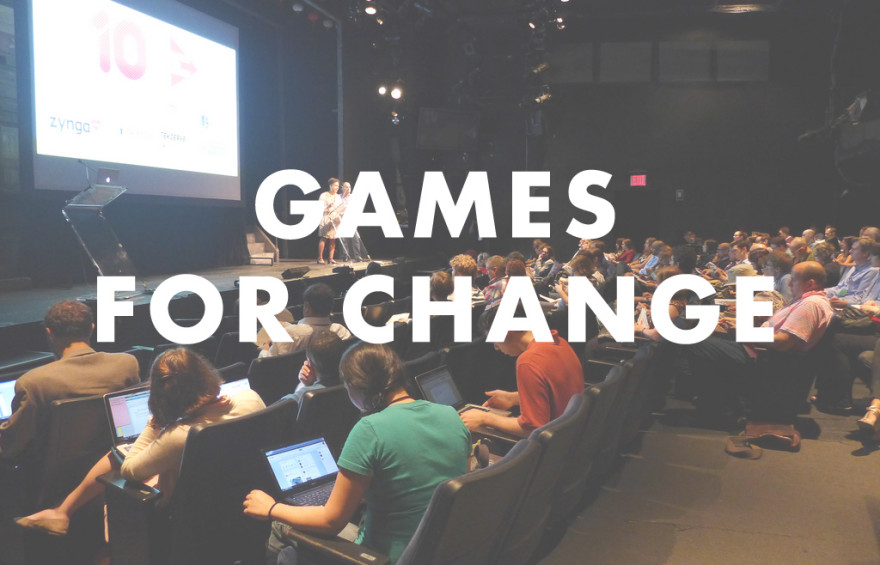 You’d be hard-up to find more righteous vibes in all of New York City last week than at the Games for Change Festival, held at 340 West 50th Street. The annual gathering attracted a diverse range of feel-good initiatives, from game clubs for girls in Ethiopia, to urban planning through play, to street games for brightening the socio-economic miasma in Athens, Greece.

A few months ago, when we spoke with the organization’s co-president Asi Burak, he told us the missive. “We want games to be on the side that’s helping, not on the side that’s, in the best case scenario, neutral,” he said.

With that in mind, here are a few of our favorite games from this year’s fest that make a social impact.

In a fantastic New Yorker cover, the all-seeing eye of a King Kong-sized Uncle Sam is peeping through the curtains of a very distressed woman while she surfs on her laptop in bed. Annuit cœptis indeed.

Data Dealer is a strategy game that casts you as a major player in the black market, illegally wheeling and dealing big loads of private information. Of all the games at Games for Change, the timeliness couldn’t be understated. A few weeks ago, everyone knew data mining was an issue, but no one seemed very bothered. Now, it’s the cause célèbre.

Data mining is a cause célèbre.

Even Wolfie Christl, the game’s creator, knows Data Dealer is opportunist. “In our game, you are selling the information to the government,” he said. “In real life, you just give it away for free.” If that’s not ironic enough for you, it’s a Facebook game.

Blindside is a blindness sim, so there’s no screenshots, apologies. (We’re told this was a big dilemma for the team when promoting the game.) The task set before you is one the blind deal with daily; getting across the apartment without bumping into the coffee table or Tiffany lamp. Oh yeah, and running like hell from ravenous man-eating carnivores! Eh, not so much that.

When Aaron Rasmussen was sixteen, he unwittingly mixed some potassium chloride with red phosphorus in chemistry lab. The resulting explosion blinded him for a week. The accident sent him blindly running for the chemical shower, which, in his underfunded high school, unfortunately didn’t work. He ended up in the staff room, where there was only hot water, which scalded his already burnt face. He describes the scene as comic.

When he woke up in a hospital bed, he was all alone and totally blind. He tells me he had the hardest time finding his way to the john. Fast-forward ten years, long after his pupils started constricting again and he could look at fire without experiencing PTSD, he got together with his friend Michael Astolfi and Blindside was born. We’re happy to report he’s scar-free.

What’s not to love about Safe Sex With Friends? One, it pokes fun at Words with Friends and Scrabble pedants, which is a good enough reason for endorsement from me. And two, it features the most adorable drawings of jitterbugging dental dams and smiling members of the male and female anatomy you’ll see, at least this side of Draw Something.

Jitterbugging dental dams and smiling members of the male and female anatomy.

The game is by the New York fashion designer/game designer/awesome person Kaho Abe (more on her soon) together with Ramsey Nasser, and Sarah Schoemann. Abe sees it as more of funny game with a positive message than something that will necessarily save our kids from epidemics. “People take it a little too seriously,” she laughs. “It’s so absurd. To me, absurdity is a great part of games.” Coincidentally, that’s also the line I tell my girlfriend when, well, never mind.

Fun fact. Not all rabbis boast beards. And at least one hosts an alternate reality game at Washington Square Park in Greenwich Village. Played using the G.P.S. function of your mobile phone, Rabbi Owen Gottlieb’s Jewish Time Jump explores the hard knocks of the old textile district, teaching youngsters about upstanding Jewish women who fought the power and ushered in the era of labor unions at the turn of the last century.

In case you’re wondering about the “Time Jump” part, that’s part of the story, and Gottlieb describes the game as a window peering back in time. “My hope is that it gives people a [sense] that the place they are standing is rooted in history,” he says. The past is bound to repeat itself, and his message about the miserable working conditions of the blue-collared still applies today when considering a global economy. Don’t those who made the tech devices that we play on have much lower standards of living the we all do? Now that’s what I call a suspension of the ethical.